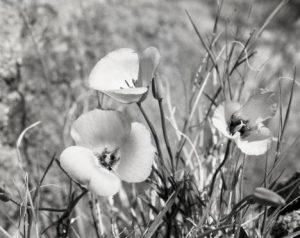 The Sego Lily is a sacred plant in Native American legend. Sego is a Shoshonean word thought to mean “edible bulb.” The flower thrives in desert-like conditions. It blooms in May and June. There are about seven variations of the plant in Utah. The white flower species displays three large, waxy petals. Each petal, on the inner surface, shows a distinctive crescent-shaped, purplish marking with a fringe of bright yellow hairs. The plant’s leaves, withered by flowering time, appear grass-like and sparse.

Sego Lilies, the Utah State flower. This plant is responsible for staving the hunger of the Mormon pioneers many times. They retained their color to some extent after cooking, thus making a colorful dish.

The pioneers of 1848–49 ate the sego lily bulb to help ward off starvation. Some bulbs were as large as walnuts, but most were the size of marbles. The bulbs were best fresh-cooked because they turned thick and ropey when cool.

By the 1880s those early settlers who had eaten the bulb felt it set them apart from newcomers to the Salt Lake Valley. The old-timers thought that to have suffered through the hard times of the early Utah colonizing showed their tenacity and righteousness. For those pioneers it became a badge of virtue to have been a “bulbeater.”

On March 18, 1911, the Utah State Legislature designated the sego lily as the state flower. Early in 1913 the LDS General Relief Society Board chose it as their official emblem. During the First World War the flower became a symbol of peace. Karl E. Fordham’s poem “Sego Lily” portrayed the plant as an image of home, mercy, freedom, and peace for the men and women of Utah who were serving on the battlefields of Europe. 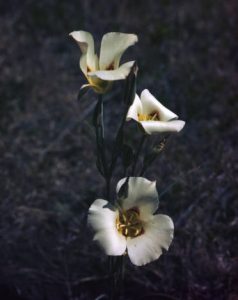 Few Utahns today have eaten a sego lily bulb. Instead, people harvest the flower by taking pictures of it in its harsh, Utah desert setting. Others just look at the flowers and store memories of the sego lily’s beauty of springtime blossoms. Today, the delicate bloom nourishes the senses and the soul.