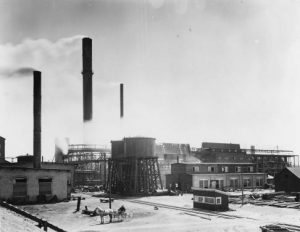 Highland Boy Smelter consolidated on May 14, 1909

Americans tend to believe that pollution is a relatively recent phenomenon and that concern about the problem only began to surface in the 1960s. In the first decade of the 20th century, however, farmers in the Salt Lake Valley united to fight against industrial pollution. Although they won the short-term battle, the larger war to save their agricultural way of life was doomed by the forces of population growth and urban expansion.

The counties along the Wasatch Front have long boasted Utah’s strongest and most diverse economies. Agriculture had been their mainstay in the territorial period, and these same areas became the industrial and population centers of Utah as well. Wasatch Front farmers proved highly adaptive. Realizing the potential of improved transportation and market access, they diversified, growing sugar beets, truck vegetables, and grains and adding orchards and dairy cattle to their operations. An early example of their adaptation to industry was the beet sugar business; farmers began to feed their cattle on beet pulp left over from the sugar extraction process. 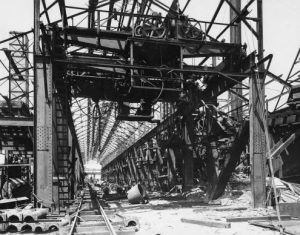 though. In 1901 a mysterious illness affecting cattle in Layton was diagnosed as lead poisoning. It seems that the boxcars that hauled the beet pulp to feed these cattle had earlier carried ores containing a dangerous lead content to local smelters.

The smelting and refining business boomed in the Salt Lake Valley in the 1890s and early 1900s, processing ores from the nearby mines. The first copper reduction smelter, the Highland Boy, was built in Murray in 1899. More smelters followed at Midvale, Bingham Junction, and elsewhere. Most Utahns welcomed the smelting industry; it provided hundreds of jobs and contributed to the strength and diversity of the new state’s economy.

Salt Lake Valley farmers, however, soon regarded the smelting industry as a menace. In the summer of 1903 strong winds and rain spread “smelter smut” across the valley, blighting crops wherever the smoke touched ground. The problem was sulfur dioxide fumes in the smoke; when the fumes mixed with water, they created deadly sulfuric acid. The farmers demanded an investigation, and authorities turned to Professor John A. Widtsoe at the Utah State Agricultural College in Logan.

Widtsoe stated his findings carefully: He expressed concern that farmers were blaming all of their problems on airborne pollutants, while other factors contributed to the crop failures. He had determined, however, that the sulfur dioxide problem was real, particularly in areas that received direct smoke contact. The farmers demanded a complete and immediate stop to the pollution; when smelting company officials asked for time to study and mitigate the problem, arbitration efforts broke down. The farmers took their grievances to federal court.

A number of cases were filed, but the one with the greatest impact was James Godfrey et. al. v. American Smelting and Refining Company et. al. Taking a leaf from labor organizers, the farmers had united behind this case involving 419 farmers and five different smelters. Federal Judge John A. Marshall ruled for the farmers, granting an injunction requiring that the smelters process ore with no more than 10 percent sulfur content. Smelters failing or refusing to meet that standard would be permanently enjoined from operation. All but one company chose to close or move their operations. American Smelting and Refining paid the farmers $60,000 compensation to allow its continued operation.

While farmers celebrated their victory, others in the community were incensed. The smelting business had provided many jobs, and now many Salt Lake Valley residents were unemployed. In the ensuing decades farmers would realize that they were losing ground in the long run. Utah’s rapidly growing population filled the Wasatch Front communities and turned farmland into housing developments. Simultaneously, a variety of industries moved into former farm areas as well.

Sources: Leonard J. Arrington and Thomas G. Alexander, A Dependent Commonwealth: Utah’s Economy from Statehood to the Great Depression, edited and with an introduction by Dean L. May (Provo: Brigham Young University Press, 1974); John E. Lamborn and Charles S. Peterson, “The Substance of the Land: Agriculture vs. Industry in the Smelter Cases of 1904 and 1906,” Utah Historical Quarterly 53 (fall 1985): 308–25.