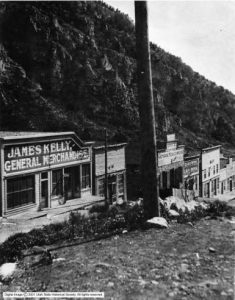 Stores and businesses of Ophir, Utah. Ophir was settled in the 1860s when ore was discovered. It peaked in the 1880s.

Beginning in the 1860s mining has been an important industry in Utah. Tooele County has long been a leading producer of gold, silver, copper, lead, and zinc. But because the first claims were staked by U.S. soldiers who did not stay in Utah and left few records, little is known about early mining techniques and camp culture. Archaeological study of the Soldier Creek charcoal ovens near Stockton, Tooele County, has provided some valuable information not found elsewhere.

Located at the foot of Soldier Creek Canyon at an altitude of 6,100 feet, these four kilns were known as the Waterman Coking Ovens. Waterman was among four pioneer companies operating concentrators in the area. The Jacobs concentrator, built in 1872, was the first; Waterman’s probably opened soon after. Another, Chicago Smelter, ran for only a few years.

Easily mined high-grade deposits of silver and gold had been found in the mid-1860s and quickly depleted. Continued mining of extensive low-grade deposits was economically feasible as long as ore prices remained high and smelters were conveniently located. The Waterman operation served both the Rush Valley and Ophir mines. 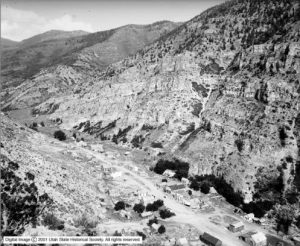 Image shows a birds-eye view of the small mining town of Ophir in Tooele County.

The kilns themselves reveal a knowledge of smelting techniques brought from California and the East. The best-preserved oven is a dome-shaped structure representative of the eastern beehive-type kiln. Such kilns had parabolic domes, base diameters of from 15 to 24 feet, and heights of 19 to 22 feet. Their walls were thicker at the base and had two openings: one two-thirds up the wall for feeding wood into the kiln and drawing the fire and one at the base, presumably for removing concentrates and ashes. Both openings were covered by hinged iron doors. A 16-foot kiln held 15 cords of wood at a time, a 26-foot kiln 45 cords. A single batch of ore had to be burned 3-7 days and then cooled 3-6 days. Cracks in the kiln walls had to be patched periodically both inside and outside using a stuccolike material.

The Soldier Creek beehive kiln is relatively small, having an interior diameter of 13 feet 6 inches. Its structure is stone plastered with a hard, white mortar coated on the inside with carbon. Spaced about every three feet around the base of the kiln are 3 x 4-inch vents for regulating the fire. A kiln of this size probably cost between $500 and $5,000 to build, a modest investment given its long usage.

Other kilns have square exteriors with beehive-shaped interiors. One was fired through a dome-shaped archway in the bottom center. In addition, there is a rectangular lime kiln about 13 x 9 feet with a 6-foot round cavity. It is made of stone mortared with red clay.

The Waterman operation was purposefully located midway between its timber source (Bald Mountain two miles to the east) and the Rush Valley mines (about three miles southwest) and Ophir mines (three miles southeast) to minimize transportation needs. Near the kilns lie the deteriorating foundations of two large buildings, several small ones, and a dugout. Written records, plus examination of the ruins, indicate a camp of 15 to 20 workers’ families lived near the smelter.

An 1874 newspaper describing the Chicago operation tells us something about the way the kilns operated: “In the rear of the furnaces are the fuel sheds, in which a supply is maintained of 20,000 bushels of charcoal, and forty tons of coke. The charcoal is obtained under contract, from the adjacent mountains, and produced chiefly from nut pine, delivered at the works at twenty-one to twenty-two and a half cents per bushel. The coke used is obtained from Pennsylvania at a cost of $36 to $42 per ton….” Besides being furnished under contract, charcoal production was a cottage industry in early Utah with farm wives and their children producing it as a cash crop.

Although the Soldier Creek kilns have suffered some vandalism, several are in fair condition. Because pioneer kilns in Utah have largely disappeared these in Tooele County are worth preserving.