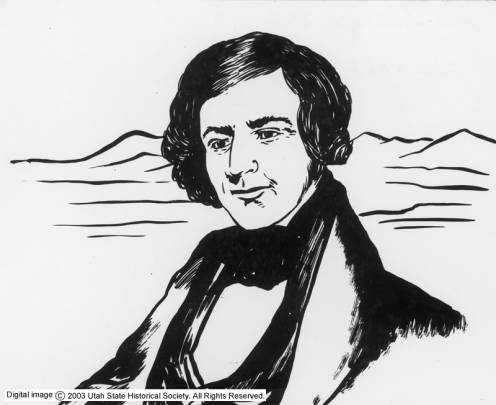 Jedediah S. Smith was a trailblazer, brigade leader, and partner in two fur-trading companies whose travels took him throughout Utah and the West. Born in 1799, he was the first American after the Astorians to cross west over the Continental Divide, rediscovering South Pass; the first to cross overland to California, and in so doing journey the length of Utah; the first to traverse the Sierra Nevada; and the first to cross the Great Basin Desert.

In 1822 Jedediah Smith became one of the original “Ashley Men,” trappers under the command of William Ashley. He ascended the Missouri River that spring under Andrew Henry’s command and spent his first winter on the Musselshell River. In the spring of 1823 Smith was sent down river to find Ashley’s main group, at which time he proved his worth as a leader.

After the Arikara campaign, Ashley divided his forces and instructed Smith to find the Crow Indians and gain their trade. Smith’s party spent the winter of 1823–24 with a band of Crow Indians who told him about the Green River area and how to reach it. In mid-March 1824, his company crossed South Pass in present-day Wyoming and descended into the Green River area and prepared for the spring hunt.

In September 1824, near present Blackfoot, Idaho, Smith helped a destitute party of Hudson’s Bay Company trappers and accompanied them back to Flathead House. In December Smith’s Americans accompanied Peter Skene Ogden’s brigade to the Bear River. In early July 1825 Smith arrived at Henry’s Fork for the first rendezvous; at its close he accompanied William Ashley and the brigade’s furs back to St. Louis. En route down river, Ashley took Smith as partner to replace the retiring Andrew Henry.

The following spring of 1826, Smith was sent ahead of the westbound pack train to arrange for the rendezvous, held that year in Cache Valley. During the rendezvous, Ashley arranged to sell his share of the company to Smith, David Jackson, and William Sublette.

In August, the three partners split up for the fall hunt. Smith, with seventeen men, pushed south to appraise the trapping potential of the region south and west of the Great Salt Lake. This trek took Smith the entire length of Utah, along the route of present Interstate 15 with a side venture via Spanish Fork Canyon to Sanpete Valley to trade with the Ute Indians.

Smith proceeded along the Virgin River to its confluence with the Colorado River, and then continued south to the Mojave villages. The company then pushed west to the San Gabriel Mission and in so doing effectively completed the desired but unfinished route of the 1776 Dominguez-Escalante expedition.

Smith and two trappers left the remaining party on the Stanislaus River in the spring of 1827 and traversed the Sierra Nevada over Ebbetts Pass, then crossed Nevada, roughly following the route of present U.S. Highway 6. They reached the Utah-Nevada border near present Grandy, Utah, then continued on to Skull Valley. Two days later, they reached the south tip of the Great Salt Lake and arrived at the 1827 rendezvous on Sweet Lake (Bear Lake) at present-day Laketown, Utah.

At the close of the rendezvous, Smith, with eighteen men, again headed south through Utah. They traveled south to the Weber River, and then to the Great Salt Lake; he then followed his previous trail, excluding his jaunt into the Sanpete Valley. The party continued to the Mojave villages; however, while crossing the Colorado, Indians attacked the party, killing half of Smith’s men and capturing all the horses. The remainder made their way to California, only to find that Mexican officials there wanted to incarcerate them. It was finally resolved that Smith’s company was to leave California by way of Bodega. The company spent the winter of 1827-28 in the San Francisco Bay area; in the spring of 1828 they pushed north, finally reaching Smith’s Fork of the Umpqua River. Here the encampment was attacked by Kelawatset Indians; only four survived the attack, including Smith. The four reached Fort Vancouver in mid-August 1828, and received help from the British trappers there.

Smith spent the winter of 1828-29 at Fort Vancouver. In March he journeyed west to Flathead Post. On the Flathead River Smith was reunited with his associate Davey Jackson. The two trappers reached the Pierre’s Hole rendezvous in August, where they again joined their partner William Sublette. The three parted ways for the fall hunt, with Smith leading a large force into Blackfoot Indian country.

At the following 1830 rendezvous on the Wind River, the three partners sold their trapping interests to the Rocky Mountain Fur Company and then became involved in the Santa Fe trade. While en route to Santa Fe, Smith was killed by Comanche Indians while scouting for water.