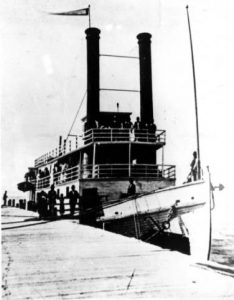 On May 23, 1871, nearly 3,000 people stood by the banks of the Bear River in Corinne to witness the launching of Utah’s first steamboat—an event that excited the imagination of the public. About a year earlier, Corinne businessmen had conceived the idea of creating a steamship line to rival the newly constructed Utah Central Railroad. By offering cheaper freighting rates than the local railroad, investors were convinced that the steamboat would capture the mineral transport business created by the growing mining camps south of the Great Salt Lake.

The Corinne Steam and Navigation Company purchased some $40,000 worth of machinery to begin the project in January 1871. When the parts arrived from St. Louis, Corinne was bombarded with the clanking sounds of construction as workers labored for nearly four months to assemble the steamboat.

The completed ship, majestically docked at the Corinne port, weighed two tons and was 150 feet long. Prepared for leisure cruises, the three-decker vessel had eight staterooms, a dance hall, and private dining cabins that could accommodate 60 to 70 people. A large paddle wheel was fixed to the stern of the ship. On the side was emblazoned the steamboat’s name, the City of Corinne.

The May celebration of the launching of the ship was a lively affair. Horse races, baseball, and a grand ball in the Opera House kept the guests from Salt Lake and beyond busy throughout the day. At 2 P.M. an excited crowd stood at Corinne’s port to witness the launching of the City of Corinne. Many walked away disappointed, however, when the vessel was caught, apparently on the launching timbers, in shallow water only 20 feet downriver. Four hours later the City of Corinne was finally freed and on its way to the Great Salt Lake.

During the months of June and July the steamboat kept a tri-weekly schedule, transporting passengers and cargo to and from Lake Point on the south shore of the Great Salt Lake and the transcontinental railroad at Corinne. Though Lake Point was a remote port far removed from Salt Lake City, investors worked hard to make it an appealing destination for their customers. Fox Diefendorf, owner of the City of Corinne, invested in a newly invented “steam wagon” to transport ores from the Stockton and Ophir mines to the landing at Lake Point. Meanwhile, Jeter Clinton was busy transforming the port into a resort beach. In early 1871 he had constructed a temporary building, Lake House, that provided showers and refreshments for tourists. In the fall Clinton replaced the structure with a hotel.

Despite these efforts business had dropped by late July. Since no railroad connected Salt Lake City with Lake Point, few passengers were willing to take the trip. Numerous attempts were made to promote passenger sales but to no avail. Diefendorf sought to lure passengers with newspaper advertisements that read: “(Spend) a whole day on the south shore, to visit the caves and grottoes near Lake Point, enjoy surf bathing, and hunting….” When passenger rates continued to drop in August, Diefendorf had no choice but to end scheduled sightseeing trips around the lake. Instead, the City of Corinne was launched for private parties and school field trips. Finally, in April 1872, Diefendorf sold the City of Corinne to H. S. Jacobs of Salt Lake City.

Three years later John W. Young (a son of Brigham Young) bought the ship to attract tourists to his Great Salt Lake resort at Lake Side near Farmington. In September 1875 General James A. Garfield, soon to be elected as the U.S. president, took a complimentary tour of the lake in the City of Corinne. At the suggestion of a woman passenger, Corinne’s steamboat was renamed General Garfield. To the humiliation of the people of Corinne, who had so proudly celebrated its launching, the steamboat was permanently anchored at the Garfield Beach Resort until it was destroyed by fire in 1904.