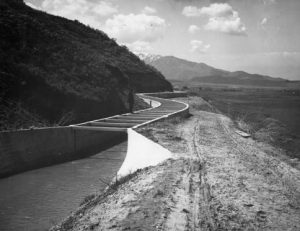 From the earliest years of the nation, American public policy has generally recognized agriculture as the best possible use for land. Thomas Jefferson’s veneration of the independent, virtuous “yeoman farmer” was shared by most of his countrymen. Policies such as the Northwest Ordinances, which established the method for surveying and selling public land, and the Homestead Act, which granted lands to individual settlers, reflected the belief that public lands should be transferred rapidly into the hands of private, smallholding farmers. In the early part of the 20th century, the federal government took the lead in mammoth projects to irrigate Western farmlands. The first federal reclamation project in Utah was the Strawberry Valley project.

From approximately the 100th meridian of longitude West to the Pacific, the continental United States is relatively arid. American settlers, used to the plentiful rainfall and rich soil of the Ohio and Mississippi River valleys, discovered how difficult it could be to farm the Great Plains. Others passed quickly through the Great Basin on their way to rainy Oregon and northern California in the early 1840s.The Mormon farmers who came to Utah in the 1840s and 1850s immediately recognized the necessity for irrigation, and began the laborious process of diverting stream and river water onto their fields.The primacy of water among the West’s resources was recognized by its more astute explorers, most notably John Wesley Powell, who unsuccessfully proposed that state borders should follow drainage basins rather than arbitrary survey lines.

Western settlers petitioned the federal government to alter their public land policies to accommodate the realities of scant water. Washington responded slowly, eventually authorizing a survey of irrigation practices. In 1900, both national parties’ political platforms called for a national “reclamation” program to turn Western deserts into abundant farmland. Senator Francis Newlands of Nevada became reclamation’s most prominent champion, and the 1902 bill that created the Bureau of Reclamation bore his name.

Utahns quickly recognized the potential value of federal help for large-scale reclamation projects that were beyond the reach of local government or private means. State Senator Henry Gardner of Spanish Fork, among others, suggested that a reservoir in the Strawberry Valley could store Colorado basin water on the east side of the Wasatch Mountains, and transfer it across into the Great Basin. Utah Valley farmers enthusiastically joined the campaign to irrigate the southern end of the valley, and in December of 1905, the Department of the Interior authorized the project

The biggest and most difficult engineering feat, a nearly 20,000-foot long, concrete-lined tunnel from the reservoir to the head of the Diamond Fork of the Spanish Fork River, was begun in August of 1906. Crews from east and west met in June, 1912, and the first irrigation water began to flow in June, 1915.  The reservoir itself began to fill when dam construction began in 1911. Eventually, nearly 300,000 acre-feet of water were impounded by a 71-foot high rock structure with a concrete core wall. The Bureau of Reclamation sought local bids for both the tunnel and dam, but when none were received, Bureau work crews performed the labor.

The project was declared complete on June 30, 1922, and its various water users assumed control and began gradual repayment of construction costs in 1926. The Strawberry Project proved highly beneficial to the economic growth of southern Utah County, as sugar beets, alfalfa, and truck farming increased their total acreage and seasonal yields. The project also provided employment for local workers, as well as incidental benefits such as electrical power, and improved roads. The success of the Strawberry Valley project led to a number of other Utah reclamation efforts, including the Glen Canyon Dam and the still-unfinished Central Utah Project.

Sources: It’s Your Misfortune and None of My Own: A New History of the American West, by Richard White. “An Investment in Progress: Utah’s First Federal Reclamation Project, the Strawberry Valley Project,” Utah Historical Quarterly summer 1971, vol. 39, #3.