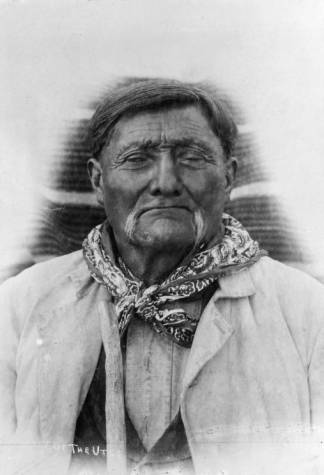 In the quiet solemnity of the Heber City cemetery stands a simple sandstone marker bearing the initials T. T. A huge pine tree towers over the grave, shadowing the burial place of Tom Tabby, son of Tabby-To-Kwanah, a chief of the Ute Indians who lived at the reservation in the Uinta Basin in 1867. Chief Tabby, as the white settlers called him, wanted his son buried in the way of the Mormons; therefore Tom Tabby’s remains were laid to rest among the graves of the Murdock family rather than on the reservation land.

It was during the Black Hawk War of the mid-1860s that Tom Tabby died accidentally while hunting. Chief Tabby, whose people had once freely roamed the Provo River Valley in which Heber City is located, carried his dead son in his arms to the town hoping that the boy could be buried there. Joseph Stacy Murdock consented to conduct a Christian burial service. According to a plaque at the cemetery, following the funeral Tabby said, “My son has been buried in the white man’s custom, now he will be honored in the Indian fashion.” The Indians laid cedar logs on the grave, led the boy’s favorite pony to the logs were it was killed, then ignited the funeral pyre. When the blaze had died to embers, the saddened chief mounted his horse and with his companions rode east to the reservation. Chief Tabby-to-Kwanah, the seeker of peace between the Native Americans and the settlers, had demonstrated his commitment to seek the best of both worlds rather than fight.

When the white settlers first arrived in Utah, Tabby was a young man but already a leader of one of the many bands of Utes in central and eastern Utah. Despite early conflicts in Utah Valley and more serious outbreaks in the 1850s led by Chiefs Wakara (Walker) and Tintic, the settlers and the Native Americans under Chiefs Sowiette and Tabby lived in relative peace. Tabby-To-Kwanah, whose name means Child of the Sun, and his people interacted peaceably with the whites for several years. However, by the early 1860s white-Indian conflicts intensified and the federal government decided that the Native Americans should be placed on reservations for mutual safety and so the settlers could occupy more land. The treaty of 1865 relegated the Uintah Utes to the Uinta Basin. If the Indians would move there they would receive payment for their land—including the Indian farms at Spanish Fork and Sanpete they were giving up—and services and supplies from the government. Sixteen chiefs signed the treaty, but Congress did not ratify it. The treaty goods and money were never delivered, and the Indians continued to roam in search of food. For Chief Tabby and his people, who traditionally located seasonally in the Uinta Mountains and Basin, the transition was not as difficult as for some bands, but all were distressed when the government did not deliver their “presents” and they faced constant hunger. Many Indians, angry about being forced off their native lands, rebelled under Chief Black Hawk. The more peaceful ones went with Tabby to the reservation and avoided bloodshed, although greatly disappointed in the word of the white man.

During 1865–68 followers of Black Hawk terrorized the settlers, stealing livestock and occasionally killing isolated whites. Because there had been little problem with Tabby’s Utes, one of the first acts of the Wasatch Militia was to make peace. According to Joseph S. McDonald, a member of the militia, Captain Wall and 24 men from Heber City took three wagon loads of supplies, plus 100 head of cattle as a gift from Brigham Young, to the reservation as a peace offering. The goods were taken to the Indian Agency on the west fork of the Duchesne River, where the Indians were gathered. Many males had gone to fight with Black Hawk, but tensions remained high. Even Tabby was angry, feeling betrayed by the white man, and he warned of possible trouble. The militia prepared defenses at the agency and waited three days for an attack. About 275 warriors surrounded the area. Tabby was inside the agent’s cabin when Captain Wall decided that it was time to talk. For three hours Tabby and Wall negotiated and then met again the next day. At last Tabby agreed to peace and accepted the cattle and supplies. The warriors, still hot for battle, were quieted by Tabby. Some young men were difficult to restrain, though, and incidents of raiding livestock continued. Heber City remained on guard, but for the most part Tabby’s followers avoided warfare.

In August 1867, according to John Crook, Chief Tabby and his whole band came to Heber City for a peace feast. Large tables were set up in the bowery, and townswomen made a “good picnic” for Tabby and his people. An ox was roasted barbecue style, and everyone filled up on food. The Indians stayed a few days and then went home with presents of food. This picnic created good will, and there were few raids in Wasatch County afterwards.

By 1868 the Black Hawk War was basically over, and by 1869 most Utes were located on reservation lands. Tabby’s good judgment, pragmatism, and ability to compromise won him respect from both sides. However, Tabby-To-Kwanah was not one to sit idly by and watch his people starve when the agents failed to provide necessities. In the spring of 1872, when provisions were inadequate and his people were hungry and frustrated, Tabby, as a sign of protest, led them off the reservation into Thistle Valley in Sanpete County on a hunting trip and to hold their ritual dances. The large group of Utes made the settlers uneasy, but the move got the attention Tabby wanted to make his grievances known. Dan Jones and Dimick Huntington, who were sympathetic with the Utes, convinced Agent Critchlow, Colonel Morrow from Camp Douglas, and local community leaders to meet with the Indians. Tabby explained his people’s dissatisfaction with conditions and lack of supplies on the reservation. He said that they would “as soon die fighting as starve.” Federal officials assured the Utes that supplies would be sent, and the Utes returned to the reservation. Luckily, for once the promised supplies did arrive. For many years, Tabby continued as an effective leader, serving his people, working for their rights, and maintaining peace.