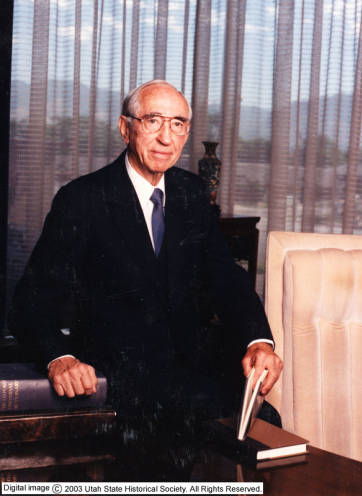 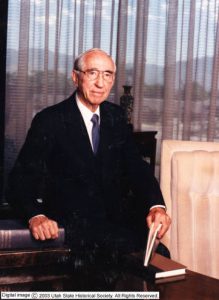 A major philanthropic figure in Utah, Obert C. Tanner was born 20 September 1904 in Farmington, Utah, the youngest of ten children born to Annie Clark Tanner, the second plural wife of Joseph M. Tanner. He attended schools in Farmington. As a youngster he thinned sugar beets, herded sheep, and did farm work. He served an LDS mission to Germany from 1924 to 1927 and returned to attend school at the University of Utah, where he completed a B.A. degree in 1929. He married Grace Adams of Parowan on 5 August 1931. After their marriage, he earned three other academic degrees: an L.L.B. from the University of Utah in 1936; an M.A. from Stanford University in 1937; and a Juris Doctor from the University of Utah in 1967. He also received honorary degrees from most of Utah’s universities and colleges.

As a young student at the University of Utah, Tanner helped pay for his education by getting up at 3:30 A.M. to make furnace fires in several homes in the affluent Federal Heights area. One of the men for whom he made fires offered him a job as a clerk in his jewelry store. With this start in the jewelry business, Tanner went on in 1927 to establish his own business, the O.C. Tanner Company, one of the Intermountain West’s most successful businesses. In 1993 the company had 2,000 employees and an annual sales volume of $200 million.

Obert Tanner’s contributions to Utah’s cultural community have been numerous. Among his notable achievements, he was chairman of the commission that planned the construction of the Utah Symphony Hall (now Abravanel Hall), the Utah Art Center, and the restoration of Salt Lake City’s historic Capitol Theatre. Tanner’s other public service includes: Chairman, Utah American Revolution Bicentennial Commission; membership on the Utah Symphony Board; membership on the Executive Committee, White House Conference on Children and Youth; and membership on the National Commission of the Bicentennial Celebration of the United States Constitution.

Tanner has given more than forty fountains to communities, hospitals, colleges, and universities. Other gifts include funding for the construction of the Adams Shakespeare Theater on the campus of Southern Utah University and the O.C. Tanner Amphitheater located near the entrance to Zion National Park. He has established eleven philosophy library rooms at prestigious colleges and universities and has endowed more than a dozen lectureships, including the world-renowned “Tanner Lectures on Human Values,” given annually at the University of Utah, University of California, Oxford, Harvard, Cambridge, Michigan, Stanford, Yale, and Princeton universities.

An active scholar himself, Tanner was an instructor in Religious Studies at Stanford University from 1939 to 1944 and was Professor of Philosophy at the University of Utah from 1945 to 1972. He has authored or co-authored ten books. Obert C. Tanner died on 14 October 1993.