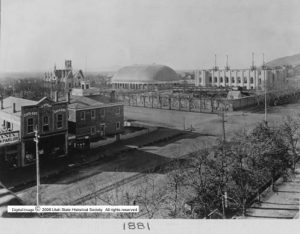 Temple Square is the most visited site in the state of Utah. Its popularity can be attributed to its central geographic location in the capital city, to the national popularity of the Mormon Tabernacle Choir, and to the general interest in the historic tabernacle and Salt Lake Temple of The Church of Jesus Christ of Latter-day Saints—the Mormons. Though it now enjoys a position of notoriety, it was never really the intent or hope of the early Mormon settlers that it would become a state, national, or even internationally known site. Temple Square began with a simple declaration by Brigham Young that it was the future site for the Salt Lake Temple. It then gradually evolved into the present sanctuary that houses within its protective walls three significant pioneer buildings, two visitor centers, and historic monuments–all within a beautifully manicured garden setting.

Temple Square began with Brigham Young’s location of the temple building site four days after the arrival of the main body of Saints into the Salt Lake Valley on 24 July 1847. Young originally called for the site of the temple to be forty acres but later reduced it to ten acres to make it compatible with the ten-acre blocks proposed for the city. The reduction in the lot size left the Salt Lake Temple on what is the northeast quadrant of the present site rather than what would have been the middle of the originally proposed forty-acre site.

The surrounding wall became the first permanent structure on what has become known as Temple Square. It was begun in 1852 as a make-work project for the new arrivals and those on their way to the gold fields in California. It later served to protect the machinery used in the construction of buildings on the temple grounds. The wall is a uniform fifteen feet high but varies in appearance because of the southwest slope of the site. It was constructed of adobe brick with a protective sandstone cap and foundation. The bricks were plastered in order to shield them from the elements. With the passage of time, however, the wall had to be rebuilt because of the gradual deterioration of the original materials. Great care has gone into its reconstruction to retain its original appearance.

A number of temporary buildings were constructed on the southwest corner of the square for general church meetings. The first were open-sided boweries with roofs made of branches and willows to provide a degree of shelter for the Saints from the elements. A more permanent building called the Old Tabernacle, was erected in 1852 to replace the first boweries. This south-facing, all-weather, rectangular building with a half-dome apse at its north end was built of adobe. It was razed in 1877 to make way for the present Assembly Hall. 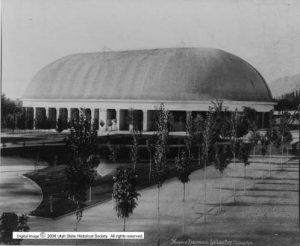 The Salt Lake Mormon Tabernacle was built between 1864 and 1867 on the west center-line axis of the temple. It was initially constructed under the supervision of Henry Grow; however, Truman O. Angell was later employed to remedy problems related to the building’s acoustics. Angell was responsible for the addition of the present gallery (built in 1870) that resolved the problem and has subsequently earned for the Tabernacle its international reputation as a nearly acoustically perfect building. The present aluminum-covered roof sits on the original Ithiel Town lattice-truss arch system that is held together by a dowel and wedge construction technique. The dome rests on forty-four sandstone piers and a sandstone foundation. Its overall seating capacity is 8,000, which includes the gallery and the choir area. The original organ was made by Joseph H. Ridges and contained 700 pipes. That number has since been increased to 11,000. The Tabernacle is the long-time home of the world-famous Mormon Tabernacle Choir.

The Assembly Hall (1877–82) on the southwest corner of the square was designed by Obed Taylor in the then-popular Gothic Victorian Style. It was built of the cast-off stone from the Salt Lake Temple. Because of its small size, it functions in a secondary role relative to the type of activities associated with the Tabernacle. 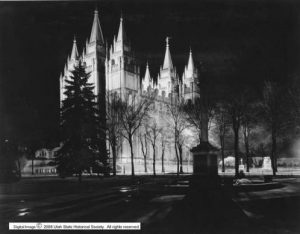 The two visitor centers that now occupy the northwest and southeast corners are relatively new buildings that did not figure into the original concept of Temple Square. Rather, the northwest visitor center now occupies the original site of the old Endowment House (built from 1845 to 1855), that in part functioned in the capacity of a temple until it was razed in 1889 in anticipation of the completion of the Salt Lake Temple. The southeast visitor center replaced an earlier visitor’s complex that once occupied this site.

There are various sculptural monuments positioned around the open areas of the square. All relate to various events associated with Mormonism from its beginnings in western New York State to events surrounding the coming of the Saints to Utah.

The focal point of Temple Square is the impressive Salt Lake LDS Temple. Unlike the other buildings on Temple Square, it is closed to the general public because it is used by the LDS church for sacred rites exclusive to those church members deemed worthy to receive them. For this reason, it, along with the other LDS temples, is given prominence within Mormonism. The temple sits on the northeast corner of the square, which is also the highest point within the square. Its overall size and vertical elevation give it a dominating position. 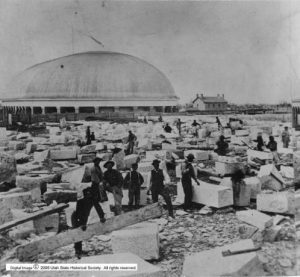 Granite blocks used in the construction of the Salt Lake Temple.

1853 to his appointed architect, Truman O. Angell, and Angell’s assistant, William Ward. For various reasons, including historical and political events, the building was not finished until 1893. It is constructed of granite rock from nearby canyons, and its walls are eight feet thick at the base and taper to six feet at the top. The walls themselves sit on a foundation that is fifteen feet wide.

The interior of the temple is comprised of a basement level and three stories above ground. A large galleried auditorium occupies the upper two stories. The four corner towers serve as access staircases to all levels of the building. The entrance to the temple is from the Chapel Annex to the north. The present English Gothic-style annex replaced an earlier plan designed by Joseph Don Carlos Young in 1866. 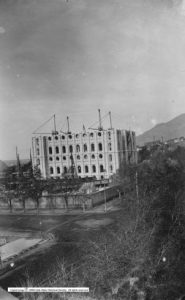 The Romanesque/Gothic style of the temple with its six symbolic tower-spires gives it a distinctive appearance unlike any other building. Its six-spire configuration has since served as a model for more recent LDS temple designs. This is an indication of the traditional and symbolic importance of the Salt Lake Temple to the members of The Church of Jesus Christ of Latter-day Saints. The surrounding environment of Temple Square helps to create a most fitting setting for such a magnificent building.