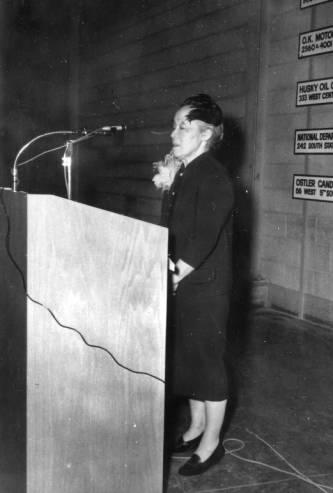 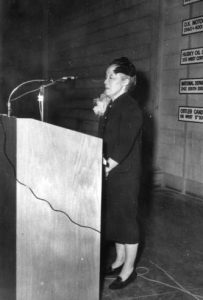 Utah Nippo editor, Mrs. Kuniko Terasawa speaks to Utah’s Japanese American banquet for the gathering of the Bicentennial observance at the Armory at Ft. Douglas.

For 52 years she handset type for a unique Utah newspaper.

When Kuniko Muramatsu Terasawa died in Salt Lake City on August 2, 1991, the career of a distinguished newspaperwoman and one of the most active senior citizens in Utah came to a close. Her death at age 95 also marked the end of the Issei (first-generation Japanese American) era in Utah.

For 52 years, working up until the day before her death, Terasawa handset metal type bearing Japanese characters into forms for printing The Utah Nippo, a Japanese-language newspaper founded by her husband.

The first issue of The Utah Nippo appeared in Salt Lake City in 1914 under her husband’s direction. After his death in 1939 she carried on as reporter, editor, typesetter, and publisher. Following the bombing of Pearl Harbor, the federal government forbade the publishing of Japanese language newspapers, but The Utah Nippo soon resumed circulation with government approval because the U.S. wanted Japanese Americans to receive accurate information on official policies regarding relocation, curfews, and other wartime news.

In addition to publishing a newspaper, Terasawa concerned herself with 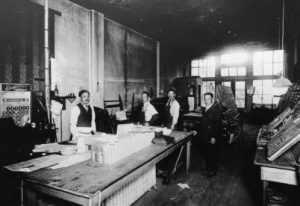 Composing room of The Utah Nippo with publisher U. Terasawa (at right) 1917.

the welfare of others, especially the non-English-speaking Isseis. Noted for her ”unpretentious wisdom and knowledge,” she was sought out by visitors from Japan and consulted by a long line of Japanese consuls general stationed in San Francisco.

Terasawa received both national and international recognition. In 1984, Hokkaido Broadcasting Company came to Utah to produce a docudrama concerning the return of the Northern Islands. The Utah Nippo was used as a basis for the film. In 1985, Matsumoto City commissioned Fuyuko Kamisaka to write a biography, “Grandmother’s Utah Nippo.” In 1987, Avon Josei Bunka Center recognized her for her strong sense of mission and her accomplishments. On the morning after she passed away on August 2, 1991, a reporter from Asahi Newspaper called to see how she was doing. Learning of her passing, he immediately reported to Asahi. Her death was known in Japan before anyone in Utah had heard.

As an exceptionally active senior citizen, Terasawa became a role model for others and was featured in Modern Maturity magazine, a publication of the American Association of Retired Persons (AARP), and on the magazine’s TV program.

In 1968, Terasawa was invited to attend an award ceremony at the Consulate in San Francisco to receive Japan’s “Order of the Sacred Treasure, Zuihosho, 5th Class.” The commendation and medal were awarded by Consul General Sueoka.

The Salt Lake Chapter of the Japanese American Citizens League honored Terasawa in 1985 as the oldest contributor to the local chapter. In 1987 the Avon Josei Bunka Center in Japan awarded her “Million Yen” for her strong sense of mission and indomitable spirit in accomplishing a great undertaking. She contributed this award to a scholarship fund at the University of Utah.

“She was a typically proud Issei that never believed in welfare or handouts,” Kasai wrote, ”but… [she was] sensitive to…mundane problems….and for a 95 year old who never visited a doctor during her lifetime, she has certainly earned her rest and a peace in Buddha’s Nirvana.”

* This essay has been corrected from its original version, which appeared in Beehive History, vol. 17.