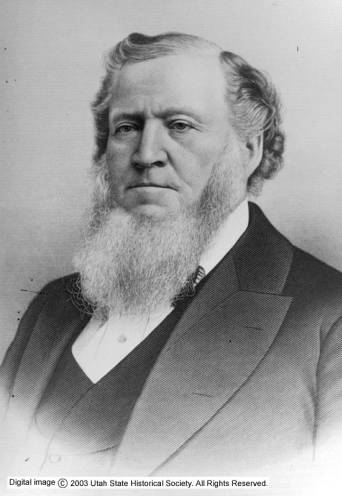 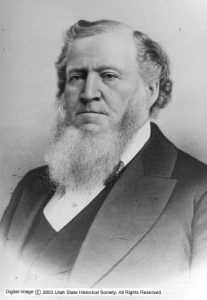 Brigham Young, first Governor of the Territory of Utah, from 1850–1858

Named governor in 1850 by Millard Fillmore, he was reappointed in 1854 by Franklin Pierce when Lt. Col. Edward J. Steptoe refused the post. Young as territorial executive was concerned with organizing the territorial government, selecting the location of the capital and building a territorial statehouse, codification of laws, organizing and establishing a territorial library, normalizing relations with the Indians and between the federal government and the Mormons, and developing home manufacturing and agriculture. Acting on rumors that the Mormons were rebelling against federal authority, James Buchanan replaced Young as governor in 1857.

Second Governor of the Territory of Utah, from 1858–1861
Democratic Party 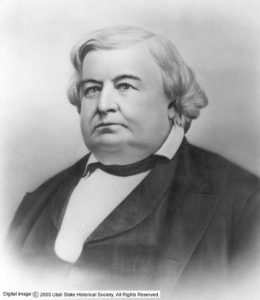 Third Governor of the Territory of Utah, 1861
Republican/Democratic Party 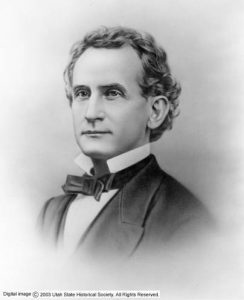 Born in 1820, a native of Cambridge, Indiana, Dawson married Amanda Thornton and was a lawyer, farmer, and newspaper editor before entering politics as a KnowNothing. He later was a Democrat, and finally a Republican. Abraham Lincoln named him governor in 1861. Antagonistic toward the Mormons and despised by them, Dawson left for the East after less than a month in Utah, and was attacked and beaten as he traveled through Parley’s Canyon. Three men allegedly involved in the assault were later killed by law officers. Dawson died in 1877 in Indiana.

See also: Tribune article, “Third Governor Was Run Out of Utah After 3 Weeks” 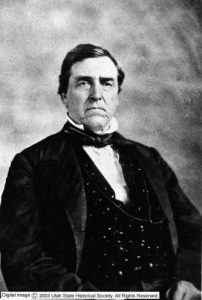 A native of Ontario County, New York, and an ardent abolitionist, Harding married Avoline Sprout and practiced law in Indiana before Abraham Lincoln named him governor of the Utah Territory in 1862. Conciliatory toward the Mormons at first, he soon became critical of church leaders and the practice of polygamy. The Mormons successfully petitioned for his removal. He served as chief justice of the Colorado Territory until forced out of office for alleged incompetence and immorality. 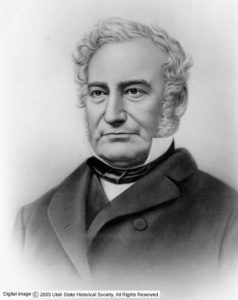 Born in Salem, New York, in 1799, Doty married Sarah Collins and served in several government posts in Michigan before moving to Wisconsin, where he was a delegate to Congress, territorial governor (1841–44), and state legislator. Originally a Democrat, he became a Free Soiler and then a Republican.  Abraham Lincoln named him superintendent of Indian affairs for Utah in 1861 and then to the vacated position of governor in 1863. Under his skillful management, federal relations with the Mormons improved. He emphasized the importance of schools and Indian treaties, and suggested using the Colorado River to transport Utah products to markets in California. Reappointed by Lincoln, he died in office in 1865 and was buried in the Fort Douglas cemetery. 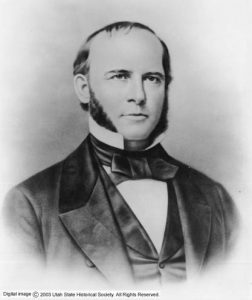 A native of Royalton, Vermont, born in 1805, Durkee became a business, civic, and political leader in Wisconsin, serving as territorial legislator, congressman, and U.S. senator (1855–61), affiliated at various times with the Liberty, Free Soil, and Republican parties. Appointed governor in 1865, Durkee pursued an energetic course oriented toward territorial development and harmony with the Mormons, although he was critical of the lack of public schools. He returned to Wisconsin in late 1869 and died in 1870 in Omaha.

Seventh Governor of the State of Utah, in 1870
Republican Party 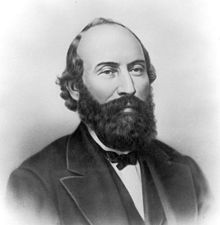 He was born in Lewisburg, Pennsylvania, in 1827, but little else is known of his early life. Brevetted brigadier general in the Union Army, he was active in Republican politics in Illinois before Ulysses S. Grant named him governor of Utah in 1870. He was determined to carry out Grant’s policy of crushing “rebellion” in the territory, a stance that brought him into conflict with other officials. Among other things, Shaffer attempted to neutralize the Nauvoo Legion by  proscribing military drills and gatherings. He died suddenly in Salt Lake City the year of his arrival. Following Masonic rites, his body was sent to Illinois for burial. 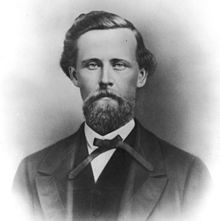 Born in Alabama, in 1838, Vaughan was Territorial Secretary in Utah when Governor Shaffer died. Ulysses S. Grant named him to fill the vacancy. The only event of consequence during his administration was the Wooden Gun Rebellion—an illegal (according to Shaffer’s proclamation) drill in November 1870 by members of the Nauvoo Legion. Undoubtedly a lark, the incident nevertheless resulted in the arrest and trial of those involved, but all were released. Vaughan was not reappointed. He died in 1878 in Sacramento.

Ninth Governor of the Territory of Utah, from 1871–1875
Republican Party 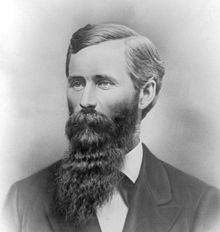 Born in Boone County, Missouri, in 1832, Woods moved with his family to Oregon, where he attended school. He prospected for gold and practiced law before entering politics. A founder of the Republican party in Oregon, he was named to the Idaho Territory Supreme Court in 1865 and ran successfully for governor of Oregon in 1866. When Woods failed to win renomination, Ulysses S. Grant named him governor of Utah in 1871. Woods saw the Nauvoo Legion as a threat to federal authority, and he also criticized the unusually broad jurisdiction of locally controlled probate courts. He urged the establishment of free public schools, comprehensive mining legislation, the abolition of polygamy, further railroad development, and federal funds to improve irrigation. He was not reappointed, however, and returned to practicing law. He died in Portland, Oregon, in 1890.

Tenth Governor of the Territory of Utah, 1875
Democratic Party 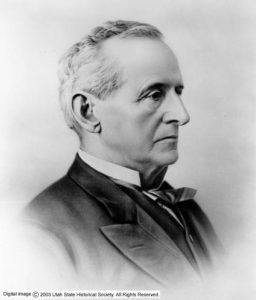 Born near Columbus, Ohio, in 1819, Axtell attended Oberlin and Western Reserve Colleges, married Adaline S. Williams, practiced law in Michigan and California, and served in Congress (1867-71) as both a Democrat and a Republican. Ulysses S. Grant named him governor of Utah Territory in 1875. More moderate than his immediate predecessors, he was harshly criticized by the growing anti-Mormon element in Utah. After only a few months in Utah, he was sent by Grant to New Mexico Territory as governor and was later chief justice there. He died in 1891 in Morristown, New Jersey. 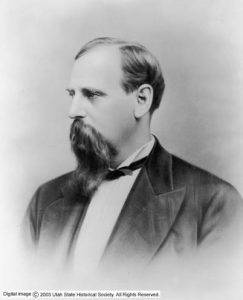 Born in 1830 in Penobscot, Maine, Emery graduated from Dartmouth, studied law in Albany, New York, and was a federal tax collector in the South before Ulysses S. Grant named him governor of Utah Territory in 1875. Despite the bitter Mormon-Gentile feud of the late nineteenth century, Emery accomplished election reforms and expanded government services for a fast-growing population. When President Grant visited Utah in October 1875 he was amazed at his friendly reception and reportedly told Emery he had been deceived about the Mormons. In February 1880, after Emery’s term had ended, the legislature named a new county in central Utah after him. He died in 1909 in Marshfield, Massachusetts. 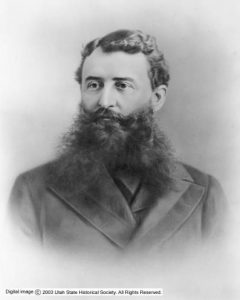 A native of Cloverport, Kentucky, born in 1843, Murray attained the rank of brigadier general during the Civil War and also completed a law degree at the University of Louisville. He married Evelyn Neal and was a U.S. marshal and newspaper editor before Rutherford B. Hayes named him governor in 1880. Murray certified the election of Allen G. Campbell (who never served) as delegate to Congress, although George Q. Cannon, an LDS church leader and a polygamist, received more than ten times as many votes. Murray’s attacks on the Mormons influenced national policy. Following the Cannon incident, twenty-three bills dealing with polygamy were introduced in Congress. Chester A. Arthur reappointed Murray, but Grover Cleveland dismissed him in 1886. Murray worked as a journalist in San Diego before returning to Kentucky. He died in Bowling Green in 1896. The city of Murray in Salt Lake County is named for him. 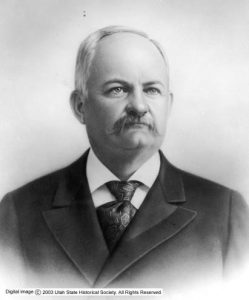 Born in Cynthiana, Kentucky, in 1844, West attended Millersburg Academy and served in the Confederate Army, incarcerated most of the time as a prisoner of war. He married Nancy Frazer. A lawyer and a municipal judge, he was selected by Grover Cleveland to replace Eli Murray in 1886. A moderate Democrat—the first Democratic governor since Alfred Cumming—he visited imprisoned polygamists, but his offer of conditional amnesty was refused. He encouraged the organization of groups such as the Salt Lake Chamber of Commerce that would serve broad community interests and include all elements of society. His first term ended with the election of Benjamin Harrison in 1888, but he returned as governor in 1893 following the re-election of Cleveland. By then the Woodruff Manifesto of 1890 had ended church-sanctioned polygamy, and national political parties had replaced the old Peoples (Mormon) party and Liberal (non-Mormon) party. In January 1896 the governorship passed from West to Heber M. Wells, the first state governor. West was a special agent for the U.S. Treasury on the West Coast until 1901. He died in 1909.

Fourteenth Governor of the Territory of Utah, from 1889–1893
Republican Party 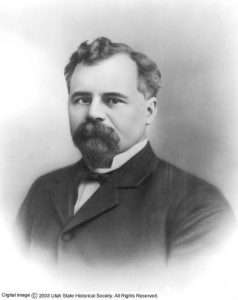 Born in 1851 in Chicago, Thomas grew up in Pittsburgh and married Helena Reinberg. He filled staff positions in the U.S. House of Representatives before serving as territorial secretary under governors Emery, Murray, and West. A member of the Utah Commission, he was named governor in 1889 by Benjamin Harrison. Regarding the Mormons, Thomas seemed ambivalent, favoring first the harsh measures in the Cullom Bill and, later, amnesty for convicted polygamists. Improved education for children and the development of irrigation to open more land for settlement were two of his major concerns. An unsuccessful candidate for the Republican nomination for the first state governor in 1895, Thomas remained in Utah as postmaster of Salt Lake City from 1898 to 1914, and was also involved in land development, mining, and publishing. He died in Salt Lake City in 1924.