The Mormon Trail: A Photographic Exhibit 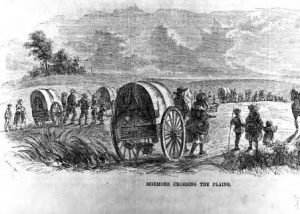 Members of a wagon train along the Mormon Trail

After leaving Nauvoo, Illinois, in 1846, the Mormons headed west. They spent the winter of 1846–47 in Winter Quarters near Omaha and at various places in Iowa, resuming their journey in the spring. First to leave Winter Quarters that spring was the advance party under the personal direction of church president Brigham Young. Organized for rapid travel, it consisted of 143 men, just 3 women, and 2 children. They traveled in 72 well-loaded wagons and made good time. Following the Oregon Trail, albeit on the north side of the Platte River rather than the south, they arrived in the Salt Lake Valley over a period of four days, July 21–24, 1847.

At that time, the Salt Lake Valley was virtually uninhabited. A few Indians traversed it on occasion but had no encampments there. The Utes preferred the valleys to the south of the lake, and the Shoshones sought the valleys to the north. The Goshutes, small in number, lived in isolation in the desert mostly west of Salt Lake Valley, and the Paiutes were located southwest some distance away.

Although the valley was hot, dry, and generally barren at the time of the advance party’s arrival, it did show some vegetation along its few streams. The men quickly recognized the natural fertility of the soil and set to work diverting water from a nearby creek into a hastily fashioned system of irrigation ditches. They planted their first potatoes and turnips in a field located near the present site of Third South and State Street in Salt Lake City.

The slower-moving companies of Mormon pioneers began arriving soon thereafter—a trickle at first but more numerous as the summer turned to fall. By year’s end, some 2,000 had entered the valley. The pace of immigration quickened under the church call for a gathering to this new Zion, and by the time of the 1850 decennial census, exactly 11,380 settlers called the newly created Utah Territory their home.

Church leadership continued to encourage members to come to Utah. They came from the Midwest, where they had previously congregated, and from the South, the East, and even England as Mormon missionaries carried the message of the gospel and gathering. Most of them came in groups called companies, organized and supervised by the church leaders. Some owned wagons, many did not. In the mid-1850s, the immigrants began experimenting with handcarts, hoping to push these two-wheeled conveyances, loaded with their meager possessions, the entire distance to Utah. The first year was a learning experience as three handcart companies made the trek in fine shape, but the last two were overtaken by early snows in Wyoming. Over 200 people died in that terrible tragedy. Still, handcarts continued to be used until 1860, by which time over 3,000 people had pushed them to their new home. Little wonder that the handcart stands proudly in today’s monuments and museums as a lasting symbol of that great trek across the plains.

By 1860, over 40,000 whites lived in Utah. Nearly all of them were Mormons. Energetic, resourceful, and devoted to a cause, they quickly fanned out from Salt Lake City in search of places to plant their communities. As early as 1848 they had established settlements northward to present-day Ogden, and by the following year they had set up small communities westward into Tooele and as far south as the Utah and Sanpete valleys. By the time the railroad reached Utah in 1869, settlements extended into the far corners of the territory and served as home to more than 80,000 people.

Not all these places endured or prospered, and some had to be abandoned in the face of hostility from the Native Americans or from the elements. But most survived and grew. The settlers knew hardships. Money and supplies were scarce, and farming proved difficult and often discouraging in a semi-arid region that was often plagued by crickets and grasshoppers.

Especially in the more remote areas during those first few years, the people knew occasional hunger, worried about Indians, coped with the heartbreak of high infant mortality rates, and usually felt at war with the elements in some way or another. Yet, buoyed by a religious zeal and a well-placed faith in the practical judgment of Brigham Young and other leaders, the men and women persevered.

And just as the trek west had been managed by church leadership, so was the location and peopling of the settlements. The preferred method was the “call,” whereby men and women were designated by name to leave their present home, usually Salt Lake City, and join together in community-building at a distant place. Thus was Parowan founded as the center of the Iron Mission in southern Utah in 1851, where the Saints worked hard to develop an iron industry, and St. George even further south a few years later, where they experimented with the growing of cotton. The aim was self-sufficiency; agriculture and local manufacturing were the chief pursuits. Small farms dotted the landscape wherever climatic and soil conditions would allow.

Retail operations soon appeared in the larger cities and towns, but money was generally scarce and lifestyles remained simple. Under church auspices, Zions Cooperative Mercantile Institution was founded in 1868 to encourage local manufactures and purchases. Initially, it offered only a modest inventory of clothing, household furnishings, and other day-to-day essentials, usually at wholesale prices. Similar cooperative ventures were attempted in most other communities of any size. Some enjoyed success early on, but the idea lasted only a few years.

The Mormons also experimented with a more radical form of social and economic organization in the 1870s called the United Order. Established in most of the territory’s towns and cities, the United Order took various forms but in every case reflected some type of communal activity. In most cases it involved community ownership of certain commercial enterprises, such as stores and mills, or livestock herds. In a few instances, it called for the consecration of all personal possessions to the Order and even communal living. Designed to keep money and profits at home, it did enjoy a modicum of success under continual prodding from Brigham Young. But with the rise of manufacturing in the East and the spread of transportation systems throughout the nation, the United Order was hopelessly anachronistic. By the 1880s, the last vestiges of it were gone.

But in many respects the pioneering experience in Utah was similar to that elsewhere in the West. The newcomers got in the way of the native people, for example, and found themselves fighting skirmishes and wars. The Walker War of 1853–54, centered in Utah Valley, took a dozen lives. The Black Hawk War of 1865–67 featured a series of hard-hitting raids by Utes, Navajos, and Paiutes against settlements in central and southern Utah, inflicting property damage in the thousands of dollars and costing the lives of 70 whites and 150 Indians. Isolated incidents of shooting and other acts of violence occurred from time to time as the Indians were gradually forced to give up most of their traditional lifeways and domain.

Also typical was the pioneers’ quest for improvement of their lives, homes, farms, and communities. Reservoirs were built and irrigation practices improved. Less than a decade after the Mormons arrived in the Salt Lake Valley, they organized the Deseret Agricultural and Manufacturing Society to promote better farming practices throughout the territory. Alfalfa was soon introduced and thrived as a nutritious crop in the warm, dry climate. Farmers imported new strains of cattle and draft horses as well as threshing headers, mowers, and other labor-saving machinery.

Nor did the pioneers neglect their emotional well-being and personal development. Looking to the local church wards as the center of their social lives, they found a respite from work and worry in such activities as dances, plays, picnics, parades on holidays, and musical performances including brass bands. As early as 1852 a group of enthusiasts founded the Polysophical Society in Salt Lake City to promote the literary arts.

The pioneers did not place great emphasis on public education during those early years but did establish a few schools, sponsored classes in some of the ward meetinghouses, and occasionally found teachers who could set up classes in their homes. They also chartered the University of Deseret in 1850. Though poorly funded at first and soon forced to suspend operations, it would in time develop into the University of Utah and take its place among the prestigious institutions of higher learning in the West.