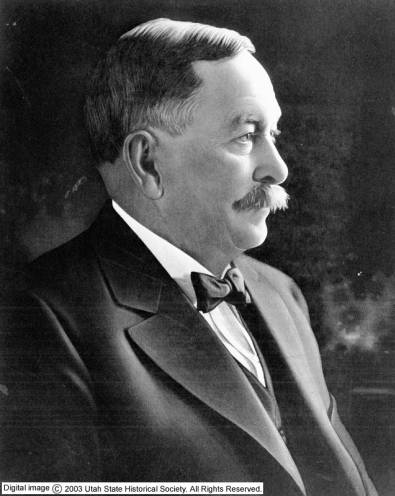 Thomas Kearns was born in 1862 in Oxford County, Ontario, Canada, to Margaret Maher and Thomas Kearns. He moved with his Irish immigrant parents to a farm in Nebraska and there obtained a grammar-school education. The development of mining in the West drew him in 1883 to Park City, Utah, where he worked, prospected, and developed with others the Silver King mine that made him a millionaire. He married Jennie Judge, with whom he had three children. Elected alderman in Park City, he was also a delegate to the 1895 state constitutional convention where he advocated an eight-hour work day.

The Democratic majority in the 1899 legislature had failed to elect a U.S. senator, leaving the seat vacant for two years. In late 1900 Kearns announced his candidacy and was elected the following year by a Republican-controlled legislature. Some accused LDS church President Lorenzo Snow of engineering the election of Kearns, a Catholic. Well-informed on mining law, Kearns also won recognition in the Senate for his support of Theodore Roosevelt’s conservation/irrigation programs. He worked to secure regimental post status for Fort Douglas and for opening the Uintah Indian Reservation to settlement. When he failed to receive support for reelection, he bitterly denounced the power of the Mormon church in a Senate farewell speech in 1905.

Kearns and his partner David Keith had purchased the Salt Lake Tribune in 1901 and also launched the evening Salt Lake Telegram. Kearns and the Tribune supported the national Republican ticket in 1904 but backed the newly organized American party in Utah. With continued Tribune support the American party won the Salt Lake City municipal election in 1905 and two subsequent city elections. The editorial and news columns of the Tribune persistently attacked LDS church leaders and their influence on politics; but by 1911 the tone had mellowed.

Kearns died of a stroke in 1918, eight days after being struck by a car at South Temple and Main streets. Under the direction of Mrs. Kearns, the Kearns fortune built St. Ann’s Orphanage (now a school), and the Kearns home, which was donated by her to the state in 1937 and is now the governor’s official residence.