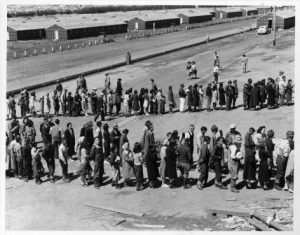 The history of the settlement of western Millard County has been a string of boom and bust cycles, most of them associated with water. Pioneers struggled to tame the tail end of the Sevier River with dams, canals, and reservoirs. By the 1910s the major dams were stable and a boom came as a result of Union Pacific Railroad’s invitation to Midwesterners to farm the area. A series of crop failures discouraged the Iowa transplants, but local Delta realtors soon invited new farmers to the abandoned land.

Following Pearl Harbor, those realtors heard that the U. S. government was looking for locations to house Japanese-Americans who might be removed from the western coastal states. As early as January and February 1942, secret meetings took place between Delta residents and government officials. By June, work had begun at the site for the 17,000-acre Central Utah Relocation Center, later re-named Topaz Relocation Center, after a nearby mountain. Located fifteen miles west of Delta, beyond the small town of Abraham, the residential area of one square mile was located at the far western boundary of the camp.

The camp opened 11 September 1942 although many barracks as well as the schools were not completed. Japanese-Americans from the San Francisco area, who had been housed at Tanforan Race Track since its hasty reconstruction for human inhabitants in March, were transported to Delta, Utah, by train. The population of the camp soon reached about 8,000. Once located, some internees finished building their own barracks and other structures at the site.

Two elementary schools, one junior/senior high school, and a hospital constituted the major structures of the camp. Administration buildings, warehouses, and government workers’ housing were located in the first few blocks of the forty-two-block camp. The remaining blocks were for internee housing. Each block had twelve apartment buildings, a recreation room, latrines for men and for women, and a mess hall. The apartment buildings were sectioned into six apartments of different sizes to accommodate families of two, four, or more people. Larger families were sometimes given two apartments.

Apartments were heated by coal stoves, but cooking in the residential area was discouraged. Furniture for the apartments included only army cots, mattresses, and blankets. Some residents constructed rough tables and shelves out of scrap lumber left lying around the camp.

The barracks, crudely constructed of pine planks covered with tarpaper as the only insulation, and sheetrock on the inside, provided little protection against the extreme weather of the semi-arid climate. The first killing frost was recorded the end of September 1942, and the first snowfall was on 13 October. Some of the apartments still had no windows installed at that time. The winter temperatures in the area typically hover near or below zero, and in the summer soar to the nineties.

Internees were employed at different jobs around the camp and were paid wages ranging from $16.00 up to $19.00 a month for doctors and other skilled workers. Residents could obtain passes to shop in nearby Delta, and some found employment in that community. One man who worked at the local newspaper was subsequently charged “rent” at the camp. On 11 April 1943 James Wakasa, age 63, was shot by a guard when he was standing near the southwest section of the fence. After an outcry from the camp population, guarding procedures changed.

On 29 January 1943 President Franklin D. Roosevelt announced that volunteers would be accepted in a Japanese-American combat unit. At about the same time, residents seventeen years of age and older in all the camps were given a questionnaire. Two questions became sore points for more than just the first-generation Japanese, who were not permitted citizenship in the United States. Question 27 asked, “Are you willing to serve in the armed forces of the United States on combat duty wherever ordered?” Question 28 followed: “Will you swear unqualified allegiance to the United States of America and faithfully defend the United States from any or all attack by foreign or domestic forces, and forswear any form of allegiance or obedience to the Japanese emperor, to any other foreign government, power or organization?” Since the Issei, or first-generation Japanese, were denied citizenship in the U. S., answering “yes” to question 28 would leave them without a country. After a protest by many residents, the question was altered; but damage had been done. Some became “No No boys” by answering “No” to both questions. Dissidents from all ten relocation camps were sent to Tule Lake, California. Of those qualifying for military service, 105 volunteers soon left Topaz for active duty.

Camp life at Topaz settled down and residents continued the routine of cultivating gardens, attending classes at schools or the recreation halls, and working. In 1943 residents with sponsors were encouraged to leave the camps and move farther inland. But the camp didn’t close until October 1945. The buildings were then dismantled; some were moved to other locations, leaving cindered roads, foundations for latrines and mess halls, and an episode that sullied the history of American democracy and its Constitution.

In 1976 the Japanese-American Citizen League erected a monument near the site of the camp. On 10 August 1988 President Ronald Reagan signed a redress bill into law, issuing an apology to those interned and calling on Congress to budget compensation for the survivors.