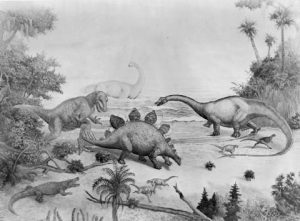 Prehistoric reptile and plant life of the Uinta Basin is shown in this picture of Ernest Untermann’s. Solidified bones of brontosaurus and many other prehistoric creatures have been removed from the shales and sandstones of this monument (Dinosaur Nat. Mon.) in Utah.

The Uinta Basin and Mountains are located in the northeast corner of the state and are part of a larger physiographic area known as the Colorado Plateau Province. The Uinta Mountains, a folded and faulted anticlinorium (a succession of geological anticlines and synclines), are 150 miles long and are oriented in an east-west direction; they extend from Heber Valley on the west to Cross Mountain in Colorado to the east. The mountain range is thirty miles wide. The Uintas contain some of the highest mountain peaks in the state, Kings Peak being the highest at 13,520 feet. The mountains receive annually about thirty inches of precipitation. During the Pleistocene era the Uintas were extensively glaciated. Lakes formed by this process dominate the mountains. Some of the larger lakes today serve as important reservoirs for the Wasatch Front.

In addition to the Great Salt Lake, the Uinta Mountains are perhaps the most important physiographic feature in northern Utah and the central Intermountain region. The Uintas are central to the historic and economic developments of northern Utah. They are the source for several of the most important Wasatch Front rivers and streams including the Bear, the Weber, and the Provo. They are also an important source of water for Green River, a major tributary to the Colorado River. The Uintas contain Ashley and Wasatch National Forests as well as the High Uinta Primitive Area. 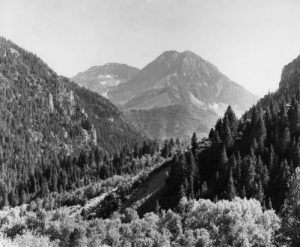 The Uinta Basin lies south of the Uinta Mountains. The southern rim of the basin is formed by the Tavaputs Plateau of the Book Cliffs, and the western rim is formed by the Wasatch Mountains. The central portion of the basin has an elevation of 5,000 to 5,500 feet. Asphalt Ridge divides the Utah portion of the Basin into two unequal parts. Between Asphalt Ridge and the Utah-Colorado state line is Ashley Valley, named for William H. Ashley, an important fur-trapping and trading entrepreneur of the 1820s.

The average annual precipitation for the Uinta Basin is less than 8.5 inches, with a smaller area around Ouray and Leota receiving less than 6 inches annually. Nevertheless, the basin is well watered. The Strawberry River drains the eastern slope of the Wasatch Mountains. The south flank of the Uintas is drained by Current Creek, the Duchesne River, Lake Creek, the Uinta River, Ashley Creek, and Big and Little Brush creeks. The southern portion of the Basin contains fewer streams and they are much smaller in volume than those of the northern portion. Green River slices through the Uintas at Split Mountain and flows through the Uinta Basin in a southwesterly direction. At Ouray the Green is joined by the Duchesne River, and White River which flows from the east.

Based on the modified Kopper system for identifying climatic zones, the Uintas, the Wasatch Mountains, and the southwest portion of the Book Cliffs are classified as undifferentiated highlands and the Uinta Basin as steppe. The Basin averages between 80 and 160 frost-free days a year while much of the Uintas has less than 40 days free of frost.

The Uinta Basin and Mountains possess an abundance of prehistoric remnants. A short distance north of Jensen on the Green River is a famous dinosaur quarry. This area was first discovered in 1909 by geologist Earl Douglas of the Carnegie Museum. During the next several years Douglas and others excavated and hauled to eastern museums tons of dinosaur fossils from the Morrison Formation of the Upper Jurassic Age. In 1915 President Woodrow Wilson set aside 80 acres as a national monument. Intensive study and work continues at Dinosaur National Monument, nine miles north of Jensen, and thousands of visitors tour the monument each year. 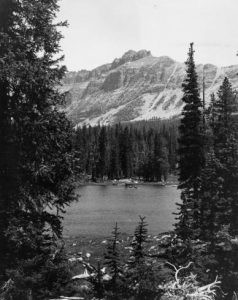 At least two Paleo-Indian cultural sites (12,000-8,500 before present) have been located in the Uinta Basin. These people were primarily hunters of the mammoth, bison, and other big game. During the Archaic period (8,500-2,500 B.P.), the basin was occupied by Plateau Archaic People, people were gatherers as well as hunters. More recently, people identified with the Fremont Culture have occupied the Uinta Basin. The Fremont Culture parallels in time and development the better known Anasazi Culture. People of the Fremont Culture lived in semi-subterranean shelters (kivas) and were dependent primarily upon corn agriculture and hunting of smaller game and fishing.

During the ethnohistorical period (A.D. 1300 to present), the Uinta Basin has been occupied by the Uinta-ats (Uinta), a band of Utes. The basin was also occasionally visited by the Northern and Northwestern Shoshones. The basin at one time was a rich provider of food and clothing for the Ute Indians.

The first white men to set eyes on the Uinta Basin and Uinta Mountains were members of the small Spanish expedition from Santa Fe headed by Fray Silvestre Velez de Escalante and Fray Francisco Atanasio Dominguez. The expedition crossed into Utah and the Uinta Basin several miles northeast of present day Jensen. These intrepid explorers opened the Uinta Basin and the eastern portion of the Great Basin to Spanish, and later Mexican, American, and British fur-trappers and traders. Between the late 1820s and the 1840s the basin and mountains were visited by such men as William H. Ashley, Etienne Provost, Antoine Robidoux, and Kit Carson. At least two semipermanent trading posts were established in the basin: Fort Robidoux, sometimes referred to as Fort Uintah or Winty (1830s–44) and Fort Kit Carson (1833–34). Several important U. S. government expeditions visited the area, including Captain John C. Fremont expedition in the 1840s, and Major John Wesley Powell who floated down the Green River from Green River, Wyoming in 1869 and again in 1871.

The Uinta Basin drew little interest during the initial phase of settlement of the Great Basin. Early in the 1860s Brigham Young did order a small expedition to the Uinta Basin to determine the suitability for locating settlements there. Upon the expedition’s return, the Deseret News reported that the expedition had found little there and that the basin was a “vast contiguity of waste . . .  valueless excepting for nomadic purposes, hunting grounds for Indians and to hold the world together.”

Unlike other settlements in Utah, Ashley Valley was not “called” by Mormon leaders to be settled. Beginning in the early 1870s, Mormon ranchers and other whites from the Indian Reservation began filtering into Ashley Valley, which first served as excellent summer feeding grounds for herds of cattle. By 1880 there was a permanent population sufficiently large enough for Uintah County to be established by the territorial legislature.

Within a decade Gilsonite and other asphaltum minerals were discovered in Uintah County as well as on the eastern edges of both Indian reservations. National and local pressure soon mounted to have the two Indian Reservations opened to white development. However, it was not until the passage of the Dawes Act of 1887 that federal means were established to have both Uinta Basin Indian reservations opened. By 1898, following an effective campaign by national and local mining interests, the Uncompahgre Indian Reservation was thrown open to miners and settlers. The Uintah Reservation followed in the summer of 1905, after allotments of 160 acres were made to each adult male married Indian (lesser amounts were allotted to single males, single women and orphaned Indian children). In August of 1905 thousands of potential homesteaders rushed to Grand Junction, Colorado, and to Vernal, Price, and Provo, Utah, to register for the land drawing which was held at the end of the month in Provo. Only a fraction of registrants actually took up homesteads and many of those eventually gave up on their efforts to secure cheap farmland. A sizable portion of Strawberry Valley was reserved for reclamation purposes. Additional lands were added to Ashley and Wasatch National Forests. And some lands located along the foothills of the south flank of the Uintas were reserved for Indian grazing grounds.

The Uinta Basin has been susceptible to frequent economic boom-bust cycles. For the most part these have been connected with the discovery or development of various natural resources coupled with national and international economic conditions. The first of these cycles was the rush for fur-bearing animals in the 1820s to 1840s. This was followed by the discovery of Gilsonite and other asphaltums. A railroad line was planned but never fully materialized. The third boom-bust cycle was the opening of the two reservations which increased the white population sufficiently that Duchesne County was carved out of Wasatch County. Commercial oil production was begun 1948 but was not fully exploited until the 1970s which increased the price of crude oil. This in turn spurred private and public ventures to develop an inexpensive process for separating oil from oil shale and tar sands. Shortage of housing, increased school enrollments, and a vigorous economic activity was experienced in the 1970s because of this oil activity. However, in 1980 international oil prices began to fall. Correspondingly the economic health of the Uinta Basin fell sharply. The development of water resources for the Wasatch Front has been yet another economic stimulus but this, too, has been only temporary.