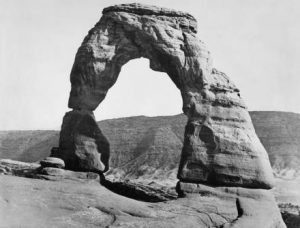 Utah presents an unusually varied landscape with three major physiographic provinces extending into the state. The Rocky Mountain Province takes up a V-shaped section of northeastern Utah and includes the Uinta and Wasatch mountains. The Colorado Plateau Province dominates east central and southeastern Utah from the Uinta Basin south to Canyonlands and the high plateau country. Western Utah lies in the Basin and Range Province, an area of deserts as well as mountain ranges separated by broad valleys. Within these three provinces, Utah ranges in elevation from 2,350 feet above sea level in the southwest corner of the state to 13,528 feet on Kings Peak in the Uinta Mountains. Five major life zones, each with a distinctive community of plants, are found within that elevation range, from the sagebrush and juniper typical of the Sonoran desert to the meadow grass and moss of the alpine tundra.

Utah’s temperatures vary greatly with changing altitude and latitude. The mountains and elevated valleys are cooler, while the lower elevations and southern parts of the state have higher temperatures. The highest temperature officially recorded was July 5, 1985, in St. George, Utah 117  F. The lowest was recorded on February 1, 1985, at the uninhabited Peter’s Sink in Logan Canyon  -69  F.