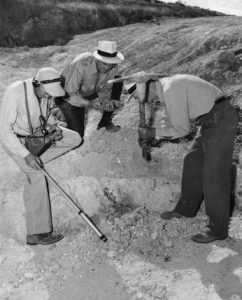 Uranium, a radioactive element, was first mined in the western United States in 1871 by Dr. Richard Pierce, who shipped 200 pounds of pitchblende to London from the Central City Mining District near Denver, Colorado. The ore was researched for fabrication of steel alloys, chemical experimentation and as pigments for dyes, inks and stained glass.

In 1898 Pierre and Marie Curie and G. Bemont isolated the “miracle element” radium from pitchblende. That same year, uranium, vanadium and radium were found to exist in carnotite, a mineral containing colorful red and yellow ores that had been used as body paint by early Navajo and Ute Indians on the Colorado Plateau. The discovery triggered a small prospecting boom in southeastern Utah, and radium mines in Grand and San Juan counties became a major source of ore for the Curies.

Prior to World War I, radium mining dwindled but a new bonanza was identified in the tailings dumps of the mines. When it was determined that the discarded vanadium added to molten steel would greatly increase the tensile strength and elasticity of the metal, Utah’s vanadium industry flourished. One of the dominant figures in the resultant boom was Howard Balsley of Moab, who sold carnotite ores to Vitro Chemical Corporation of Pittsburgh for medicaments and luminous paint. 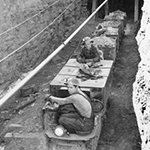 It wasn’t until twenty-five years later, as a result of the atomic age and subsequent arms race of the Cold War, that uranium, previously considered a waste product of the vanadium mines, came into demand as a key element for nuclear weaponry. In the beginning, almost 90 percent of the United States’ uranium supply was imported from the Belgian Congo and Canada. But scanty amounts being filtered from abandoned radium and vanadium dumps on the Colorado Plateau gave promise of an untapped domestic source. The Manhattan Project of the U.S. Corps of Engineers, charged with development of an atom bomb to end the war, instituted a covert program to mine uranium from the vanadium dumps and sent geologists to scour the region in search of new lodes.

With the end of World War II, the Atomic Energy Commission replaced the Manhattan Project and launched the first federally-sponsored mineral rush in history. The AEC constructed roads into the back country, promised $10,000 bonuses for new lodes of high-grade ore, guaranteed minimum prices and paid up to $50 per ton on 0.3 percent ore, constructed mills, helped with haulage expenses and posted geologic data on promising areas tracked by federal geologists using airborne scinillometers and other sophisticated radiation detection instruments.

The Four Corners area, where Utah, Colorado, Arizona and New Mexico meet, suddenly teemed with prospectors in the greatest ore search since the gold fever days of the previous century. Amateurs and experts, alike, followed AEC guidelines and used radiation detectors called Geiger counters to test promising sandstone formations for uranium deposits. Concentrating on exposed outcroppings along canyon rims, they searched primarily for the grayish Salt Wash member of the Morrison formation. When a likely claim was located, they used diamond drills to core test holes to determine if mineable ore was present.

In 1952 Charles Augustus Steen, an unemployed oil geologist from Texas, effectively proved there was significant uranium ore on the Colorado Plateau. Settling his wife and four young sons in a tarpaper shack near Cisco, he took off alone to seek the precious mineral. Unable to afford a geiger counter, he took a broken down drill rig into the back-country, ignored standard uranium-seeking technology, and used oil exploration geology to locate the Mi Vida mine in the Shinarump conglomerate of an area the AEC had deemed barren of ore. What had been ridiculed as “Steen’s Folly” resulted in the nation’s first big uranium strike in the Big Indian Wash of Lisbon Valley southeast of Moab.

Steen’s find triggered more. Vernon Pick claimed the Delta Mine northwest of Hanksville, later selling it to international financier Floyd Odlum for nine million dollars and an airplane. Pratt Seegmiller staked the lucrative Freedom and Prospector claims near Marysvale. Joe Cooper and Fletcher Bronson discovered uranium in their played-out Happy Jack copper mine near Monticello and netted over $25 million. Between 1946 and 1959, 309,380 claims were filed in four Utah counties. A center of activity, the once sleepy farming town of Moab became known as “The Uranium Capitol of the World.”

By 1955 there were approximately 800 mines producing high-trade ore on the Colorado Plateau. Utah alone had produced approximately nine million tons of ore valued at $25 million by the end of 1962. But then the industry almost came to a standstill. The AEC, now holding ample reserves, announced an eight-year limited program, and finally completely stopped buying uranium in 1970. Private industry triggered a brief second boom when nuclear power plants came on line in the mid-70s, but foreign competition, federal regulations and nuclear fears virtually put an end to domestic uranium mining.

During the uranium heyday, the federal government built several buying stations and a number of milling and reduction centers on the Colorado Plateau. Utah’s AEC milling facilities were in Salt Lake City, Monticello, LaSal, Blanding, and Mexican Hat. In 1957 Steen opened the Uranium Reduction Company, the nation’s first large independent uranium mill, in Moab. Sold to Floyd Odlum’s Atlas Corporation in 1962, the facility shut down in 1984. The federal mills were sold to private industry and finally disbanded.

Uranium excitement was not limited to the redrock desert. In the 1950s and 1960s, Salt Lake City became known as the “Wall Street of Uranium Stocks.” Triggered by a promoter named Jay Walters, Jr., a mania for buying penny stocks to finance developing uranium mines swept the country. The first offering was sold in 1953; by the end of 1954, eighty-one uranium firms were listed with the Utah Securities Commission. Housewives, schoolteachers, auto mechanics and insurance executives stood in line to buy certificates to finance large corporations such as Uranium Corporation of America, Standard Uranium, Federal, and Lisbon, and scores of false claims that didn’t have a whiff of ore.

Utah’s fabled uranium boom was not without tragedy. From the Manhattan Project days, health scientists warned that radiation in the mines was a danger to miners. Medical literature dating as early as the sixteenth century documented cancer deaths claiming a high percentage of radium miners in the Erz Mountains of Germany and Czechoslovakia. But neither the AEC, state governments, nor the mining companies would take responsibility to regulate ventilation and safety practices. It was not until hundreds of uranium miners in Utah, Colorado, Arizona and new Mexico had succumbed to lung cancer that safe levels of radiation were finally imposed. And not until 1989, after years of furtive court battles, that the United States Congress passed legislation to financially compensate radiation victims.

Although uranium mining in Utah and other western states has ceased, experts indicate that there is still substantial ore deep underground. Should demand for nuclear power revive and the market become viable, the Colorado Plateau may once again teem with the mines and mills of the atomic years.