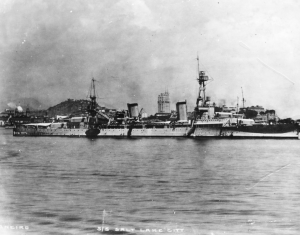 The cruiser USS Salt Lake City, also called the “Swayback Maru,” helped gain revenge for the sinking of the USS Utah at Pearl Harbor. In fact, before the war was over, the Salt Lake City would be unofficially credited with taking part in more naval engagements than any ship in the fleet. The “one-ship fleet,” another of her nicknames, survived everything, including its own nation’s most destructive weapons.

The Salt Lake City was one of eight modern cruisers authorized under the Washington Arms Limits agreement of 1921. When she was launched on January 23, 1929, she was one of the most powerful and high-speed vessels in the U.S. fleet. By 1941, however, the cruiser had been extensively modified and was considered near the end of its useful life. By good fortune the Salt Lake City was accompanying the carrier USS Enterprise as it delivered aircraft to Wake Island on December 7, 1941, and so avoided the disaster at Pearl Harbor.

The cruiser was part of Admiral Halsey’s force that retaliated for Pearl Harbor with a raid on the Marshall Islands in February 1942. The Salt Lake City apparently opened fire on Wotje Island a few seconds before other American vessels, and it is credited with being the first ship to fire on Japanese-held territory. In April she helped escort the Doolittle raid that bombed Tokyo. Wartime secrecy dictated that ships’ real names not be used, so war correspondent Robert J. Casey nicknamed the old ship the “Swayback Maru” (maru is Japanese for “ship”) in his dispatches home.

The Salt Lake City continued to be in the thick of the action, including the fierce fighting near the Solomon Islands. In the Battle of Esperance on October 11, 1942, the cruiser took so many hits and delivered so many in return that she was nicknamed “the one-ship fleet.” In the battle of the Komandorskie Islands, part of the effort to block the Japanese occupation of the Aleutians, the Salt Lake City was so badly damaged that her crew shook hands and prepared to die when she went down. The ship was ultimately saved, however, by near-suicidal attacks on the powerful Japanese cruisers by lightly armed American destroyers.

The American offensive island-hopped across the Pacific, meeting desperate resistance from the Japanese. The Salt Lake City participated in fierce battles for the Gilberts, Marshalls, Philippines, and Iwo Jima. Its final action included the bombardment of Okinawa in March 1945.

The immense atomic explosions that flattened Hiroshima and Nagasaki ended the war and inaugurated a new and frightening chapter in modern warfare. The Salt Lake City played a role in the further development of these powerful weapons. In 1946 the Swayback Maru and other obsolete vessels served as part of the atomic bomb test fleet near Bikini Atoll in the Pacific. Although the ship survived, she was deemed highly radioactive and on May 25, 1948, ships and aircraft sank the Salt Lake City off the southern California coast.