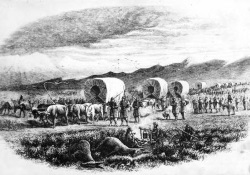 The Utah War, 1857–1858, was a costly, disruptive and unnecessary confrontation between the Mormon people in Utah Territory and the government and Army of the United States. It resulted from misunderstandings that transformed a simple decision to give Utah Territory a new governor into a year-long comedy of errors with a tragic potential. Had there been transcontinental telegraphic communications at the time, what has been referred to as “Buchanan’s Blunder” almost certainly would not have occurred.

In the absence of formal notification of administration intentions, Young and other Mormon leaders interpreted the army’s coming as religious persecution and adopted a defensive posture. Under his authority as governor, Young declared martial law and deployed the local militia, the Nauvoo Legion, to delay the troops. Harassing actions included burning three supply trains and driving hundreds of government cattle to the Great Salt Lake Valley. The “scorched earth” tactics forced Albert Sidney Johnston’s Utah Expedition and the accompanying civil officials to improvise winter quarters (at Camp Scott and Eckelsville), near Burned-out Fort Bridger, while the nation feared the worst.

During the winter both sides strengthened their forces. Congress, over almost unanimous Republican opposition, authorized two new volunteer regiments, and Buchanan, Secretary of War John B. Floyd, and Army Chief of Staff Winfield Scott assigned 3,000 additional regular troops to reinforce the Utah Expedition. Meanwhile, the Mormon communities were called upon to equip a thousand men for duty in the one hundred miles of mountains that separated Camp Scott and Great Salt Lake City.

Despite his belligerent public posture, Brigham Young never intended to force a showdown with the U.S. Army. He and other leaders frequently spoke of putting homes to the torch and fleeing into the mountains rather than permitting their enemies to take over their property. Memories of earlier persecutions were invoked to build morale and prepare the people for possible further sacrifices. Early in 1858 exploring parties were sent to locate a place of refuge that Young believed to exist in the central Great Basin. By the time they returned with negative reports, the Utah War was over.

That Young hoped for a diplomatic solution is clear from his early appeal to Thomas L. Kane, the influential Pennsylvanian who had for ten years been a friend of the Mormons. Communications and personal problems delayed Kane’s approach to Buchanan, and not until after Christmas did he receive permission to go to Utah as an unofficial emissary. He reached Salt Lake City late in February, via Panama and California, and found the Mormon leadership ready for peace but doubtful about its feasibility. When the first reports of Kane’s Camp Scott contacts with General Johnston were discouraging, Young’s pessimism was confirmed.

The “Move South” resulted. On 23 March Young announced that the time had come to implement the “Sebastopol” policy, a plan named after a strategic Russian retreat during the Crimean War. All the Mormon settlements in northern Utah must be abandoned and prepared for burning. Initially conceived as permanent, the evacuation began to be seen by the Mormon leadership as tactical and temporary as soon as word came that Kane was bringing Cumming to Salt Lake City without the army. Still, it was a relocation that dwarfed the earlier flights from Missouri and Illinois; approximately 30,000 people moved fifty miles or more to Provo and the other towns in central and southern Utah. There they remained in shared and improvised housing while the outcome of the Utah War was being determined.

As governor, Cumming soon became more popular with the Mormons than with the military forces that had remained until the outbreak of the Civil War. With the nearby civilian town of Fairfield, Camp Floyd represented the first sizable non-Mormon resident population in Utah, and it ended forever the Mormon dream of a Zion geographically separate from the world of unbelievers. As for the Mormon community in Utah, the exertions and expenditures associated with the Nauvoo Legion efforts and the Move South taxed both capital and morale. The war terminated the Mormon outpost settlements in present day California, Nevada, Wyoming and Idaho, interrupted and weakened the missionary effort in Europe, and dissipated much of the enthusiasm and discipline that had earlier been generated by the Reformation of 1856. As a demonstration of sacrificial zeal, the Move South won some sympathy, but it did not improve the prospects for Utah statehood or increase toleration of Mormon differences from mainstream American ideas and institutions.