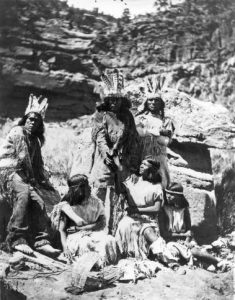 Utah’s five Paiute bands, totaling fewer than 500 members, were among those whose economic position improved slowly but noticeably during the 1930s. “For many Indians the depression years were a relatively good period,” according to Professor Ronald L. Holt of Weber State University.

Until the Great Depression government Indian policy was based on allotments. For the Paiutes this had meant the creation of four reservations—Shivwits (near St. George), Indian Peaks (far west of Beaver near the Nevada border), Koosharem (west of Fish Lake), and Kanosh (south of Fillmore)—plus, at Cedar City, a small Paiute ghetto located on 5.5. acres, with use of an 80-acre farm, both owned by the local LDS church.

Most of the acreage on the reservations was at best suitable for grazing and had few attached water rights. On the Shivwits Reservation, for instance, only 83 out of 26,800 acres were cultivated. The remainder was covered with sage, juniper, grass, and creosote. In 1936 the band did not have enough water to plant even 70 acres.

Thus the allotment policy was only a half-policy, providing the Paiutes insufficient resources to develop their land. The result was neither assimilation nor self-sufficiency. The so-called Meriam report released in 1928 pointed this out and recommended changes. But it was the Great Depression that provided the catalyst for reform.

After the stock market crash of October 1929 America’s economic system was four years reaching bottom. In March 1933 Franklin D. Roosevelt became president and began instituting a series of New Deal programs. One of his first actions was to appoint a new commissioner of Indian Affairs, John Collier, who immediately called for repeal of the Dawes Allotment Act in favor of an Indian Reorganization Act. Known as the IRA, this act protected existing Indian lands and provided for additional purchases. It encouraged the establishment of tribal and band constitutions and councils. And it set aside funds for the acquisition of water rights and the construction of irrigation systems.

Two of Utah’s Paiute groups—the Kanosh and Shivwits—voted to accept the IRA. For various reasons the Koosharem, Indian Peaks, and Cedar City bands did not participate. The Cedar City group had had little association with and virtually no help from federal agents and so did not give credence to this new Bureau of Indian Affairs’ offer of federal assistance. The Indian Peaks band was spending less and less time on its remote, all-but-useless desert reservation and was gradually joining with Cedar City.

The Koosharem band “were away gathering pine nuts” when federal officials arrived to explain the IRA. The BIA had always considered these Indians “a great problem” anyway, characterizing them as “a more or less transitory group” of inferior “mental development.” Except for a small reservation set aside in 1928, the Koosharem were expected to eventually die out. In the meantime, BIA agents decided to leave them to the supervision of the local Mormon officials.

It was unfortunate that BIA officials lacked the cultural awareness to present the IRA properly to the three nonparticipating bands. For the Shivwits, Kanosh, and other Indian groups, the WPA make-work programs of the Depression provided the Paiute’s first reliable incomes. By 1936 Shivwits families were earning annual incomes of $150 to $300. A typical Kanosh family earned $200 annually from road work, relief program jobs, pine nut sales, farming, wood hauling, or labor for local citizens. This represented slow but important progress.

On another level, though, the IRA reforms proved a long-term failure in that the Paiutes again neither assimilated nor achieved self-sufficiency. Caucasian-style majority rule was still foreign to a people whose traditions were rooted in consensus, and half the powers granted to bands under the IRA were still subject to the Interior secretary’s approval. Thus, even the Shivwits and Kanosh gained mostly nominal autonomy. A BIA agent or a local Mormon leader still made such minor decisions as what crops to plant and how much.

However, the IRA did bring some real progress. Participating bands improved their financial situations significantly compared to the non-IRA bands. In addition, they gained their first exposure to voting and parliamentary procedure. A new generation of Paiute leaders emerged with one foot in western-style governance and another in traditional consensus-seeking who could begin to synthesize the two cultural approaches.

Source: Ronald L. Holt, Beneath These Red Cliffs: An Ethnohistory of the Utah Paiutes (Albuquerque: University of New Mexico Press, 1992)