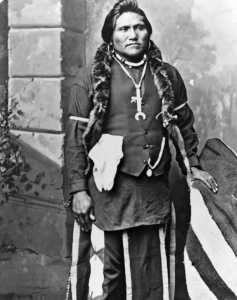 Ute Indians (who call themselves Nuciu, “The People”) are Southern Numic speakers of the Numic (Shoshonean) language family. At the time of Euro-American contact, twelve informally affiliated Ute bands inhabited most of Utah and western Colorado. They included the Cumumba (probably a Shoshone band), the Tumpanuwac, Uinta-at, San Pitch, Pahvant, and Sheberetch in Utah, and the Yamparka, Parianuc, Taviwac, Wiminuc, Kapota, and Muwac in Colorado. The bands recognized, traded, and intermarried with each other, but maintained no larger tribal organization. Band members gathered annually at their spring Bear Dance or to take advantage of some resource abundance, but otherwise remained in local residence groups of from 20 to 100 people.

Utes practiced a flexible subsistence system elegantly adapted to their environments. Extended family groups moved through known hunting and gathering territories on a seasonal basis, taking advantage of the periodic abundance of food and material resources in different ecozones. Men hunted deer, antelope, buffalo, rabbits, and other small mammals and birds with bows and arrows, spears, and nets. Women gathered seed grasses, pinenuts, berries, roots, and greens in woven baskets, and processed and stored meat and vegetal materials for winter use. Utes took advantage of the abundance of fish in Utah Lake and other fresh water sources, drying and storing them for trade and winter use.

The Ute Indians took advantage of the abundance of fish in Utah Lake and other freshwater sources, drying and storing them for trade and winter use. Cultivation of food plants was an early contact adaptation limited to the Pahvant. Ute families lived in brush wickiups and ramadas in the western and southern areas and used hide tepees in the eastern reaches of Ute territory. Men and women kept their hair long or braided, and depending on the region and season wore woven fiber skirts and sandals, rabbit skin robes, and leather shirts, skirts, and leggings. They made baskets and skin bags for carrying their goods, as well as implements of bone, stone, and wood.

Utes acquired horses from the Spanish by 1680. Especially in the eastern areas, horses increased Ute mobility, allowing them to focus on big game mammals and adopt Plains Cultural elements. Horses facilitated Ute raiding and trading, making them respected warriors and important middlemen in the southwestern slave and horse trade. While involved in this trade with Hispanic settlers, Utes remain independent from colonial control. With the exception of the 1776 Dominguez and Escalante expedition, few explorers ventured into Ute territory until the 1810s when a growing number of trappers passed through or established temporary trading posts. Beginning in 1847, Utes experienced the full impact of Euro-American contact with the arrival of Mormon settlers.

The initial Mormon settlement in the Salt Lake Valley occurred in a joint occupancy zone between Utes and Shoshones, and therefore caused little immediate disruption. But as settlers moved south along the Wasatch Front, they began competing with Utes for the scarce resources of these valuable oasis environments. Pushed from the land, Utes led by Wakara retaliated in a series of subsistence raids against isolated Mormon settlements. The Walker War (1853-54) signaled the beginning of Ute subsistence displacement and the “open hand, mailed fist” Indian policy of Brigham Young–feeding when possible, fighting when necessary.

Between 1855 and 1860, Indian Agent Garland Hurt organized Indian farms at Spanish Fork, San Pete, and Corn Creek, hoping to encourage Utes to settle down and farm. Believing that staying in one place meant certain starvation–a belief borne out by consistent crop failures–Utes resisted agrarian settlement and the farms collapsed. In 1861 President Abraham Lincoln set aside the two-million-acre Uintah Valley Reservation for the Ute bands, but Autenquer, a San Pitch war leader, rallied Ute and Southern Paiute resistance to removal in a series of attacks and subsistence raids known as the Black Hawk War (1863-68). By 1869, starving and suffering from Mormon retaliation, Utes turned to civil leader Tabby-to-kwana who led them onto the reservation. 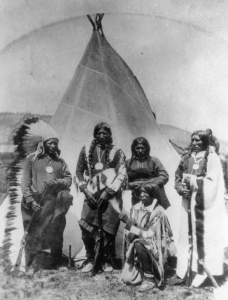 Utes found an inhospitable environment and little prepared for them in the Uintah Basin. Throughout the 1870s these Uintah Utes continued to hunt and gather in the surrounding country while agents cultivated fields in an effort to convince them to settle down. Things became more difficult in 1881 when the federal government forcibly removed the Yamparka and Parianuc (White River) Utes from Colorado to the Uintah Reservation. The following year the government moved the peaceful Taviwac (Uncompahgre) Utes to the adjoining two-million-acre Ouray Reservation.

Removal and consolidation on the Uintah-Ouray Reservation generated a number of problems for and between the Uintah, White River and Uncompahgre bands. Suspicion and jealousy over land and money, diminished opportunities to travel and hunt, and attitudes towards farming divided the bands. These problems were compounded in 1897 and again in 1905 when the government allotted the reservations and opened the remainder for white entry. Each Ute received an 80 to 160 acre plot for farming and access to a communal grazing district. In the end, allotment reduced Ute land holdings by over 85 percent. The construction of expensive irrigation projects did little to improve Ute farming and led to extensive leasing and the alienation of yet more land. Allotment ultimately limited the potential for a successful livestock industry. Short-term resistance to allotment and directed change included the Ute outbreak of 1906-08, during which nearly 400 Utes fled to South Dakota. Longer-term resistance included adoption of the Sun Dance religion and Peyotism–attempts to bind the people together and maintain an Indian identity.

During the early twentieth century, Utes worked or leased their land, performed wage labor for area whites or the Indian agency, or made do on the modest per capita distributions from the tribe. During the 1920s and 1930s they organized a business council composed of elected representatives from each of the three bands and incorporated as the Northern Ute Tribe. Between 1909 and 1965 the tribe was part of several successful federal claims cases, but most of the money judgments went to finance the irrigation project, tribal operations, or was tied up in regulated trusts and individual accounts. In 1954, following a longstanding dispute within the tribe, Northern Utes accepted a division of assets and the termination of federal recognition for people with blood quantums less than one-half. The mixed-bloods organized as the Affiliated Ute Citizens.

In the 1970s and early 1980s, Northern Utes benefited from increased oil and gas development on reservation lands in the form of jobs and severance taxes. The Northern Utes have also been key players in the Central Utah Project, receiving money and stored water in return for the diversion of their watershed runoff into central Utah. Their political clout increased in 1986 when the U.S. Supreme Court upheld the tribe’s right to exercise “legal jurisdiction” over all pre-allotment reservation lands, giving them an undefined amount of legal control over the land and citizens of eastern Utah. In the 1990s, the Northern Ute Tribe boasts nearly 3,000 members and is an increasingly powerful force in local and state politics. They are active in maintaining their language and cultural traditions while improving the economic situation of tribal members through education, tribal enterprises, and planned development.