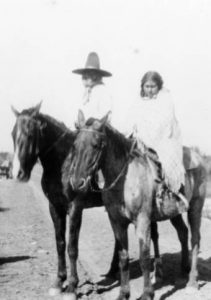 Ute Indian and squaw on the way to Bear Dance, 1924

Utah’s territorial delegate to Congress, Joseph L. Rawlins, made an unannounced trip back to Salt Lake City on February 27, 1894. Newspaper reporters, hearing he was in town, tracked him down the next day and, note pads in hand, queried him on the status of statehood. Saying he did not know exactly why the process seemed to be delayed, Rawlins asserted his confidence that the enabling bill would nevertheless be passed during the present session.

Events would prove Delegate Rawlins correct. Passed by both houses of Congress, the Enabling Act was signed by President Cleveland on July 16, 1894. It did not grant statehood, of course; that was still a year and a half away. Rather, it authorized the calling of a convention to draft a state constitution and in several other ways put the statehood procedure into high gear.

Known for good reason as the father of Utah statehood, Joseph Rawlins nevertheless seemed much less interested in discussing statehood that early spring day than in sharing details of another measure he was sponsoring in Congress: opening the Indian Reservation in eastern Utah to white settlement. Under provisions of his bill, certain land within the reservation would be given in severalty (individual ownership) to the resident Utes, and the rest of the land would then be sold in lots not exceeding 160 acres to whoever submitted the highest sealed bid.

In his proposal for severalty of Ute lands, Rawlins was marching in cadence with the reform movement of the times. Feeling that the reservation policy had been a failure, certain social thinkers, particularly in the East, began working for an Indian policy that de-emphasized tribal life-styles in favor of individualism, education, vocational training, and property ownership. Congress, responding to the call for reform, passed a series of laws in the 1870s and 80s. Key among them was the Dawes Severalty Act of 1887 which provided for the allotment of tribal lands directly to the Indians as individuals. Lots of up to 160 acres were to be given but only after being held in trust by the government for twenty-five years. In the meantime, the remainder of the native lands could be sold to the public, with proceeds going into an Indian education fund.

The Utes were understandably nervous about severalty. Beginning with permanent white settlement of the Great Basin in 1847, the central Utah band had seen their traditional lifeways destroyed over the next twenty years and had been forced to accept removal to the Uinta Basin reservation in the 1860s. Then in the early 1880s Congress enlarged the reservation by some 2 million acres and forced the relocation of two other Ute bands, the White River and Uncompahgre from western Colorado, to take up residence there. Hardly had these three distinct Ute bands, each with its own customs and values, reached a degree of accommodation and stability than they were faced with Rawlins’s proposal for yet another radical change.

While Joseph Rawlins may have been in step with the reformers of the East, he was in bed with miners, farmers, and other capitalists in Utah. An important hydrocarbon known as gilsonite, useful for a variety of industrial purposes, and other asphalt materials had been discovered on the reservation a decade earlier, and they had immediately sparked the interest of mining companies. Utah agriculture had reached its commercial phase by the 1890s, and speculators had noticed for some time the enclaves of promising farmland that dotted the reservation. It was a classic push-pull situation. If the concept of reform provided the framework for allotment, economic motives provided the impetus.

Under these circumstances it is probably surprising that opening the reservation took as long as it did. Not until 1898—two years after statehood, when Joseph Rawlins was a U.S. senator–did the process begin. That was with the Uncompahgre Reserve—the portion of the reservation that had been added in 1882. The larger opening, occasioning much greater activity, came on the original Uintah Reservation in 1905. Together they constituted one of Utah’s most spectacular land grabs. In the latter action alone, some 1,600 Indian allotments were made, and 5,772 homesteading permits were issued in the lottery that followed.

In 1934 Congress recognized the failure of severalty and repealed the Dawes Act. Unfortunately, for many of the nation’s native inhabitants, the damage was irrevocable. Such was certainly the case in Utah. When the Indianapolis Sentinel editorialized on January 5, 1896, that “Miss Utah comes into the family bright and smiling,” it caught the spirit of euphoria that most Utahns felt upon achieving statehood. For the Utes, however, it was a time of worry over a threatening and uncertain future.