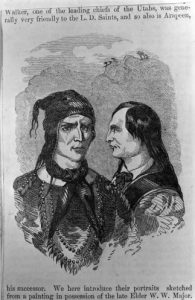 Walkara, Ute Indian Chief, sketched from a painting in possession of W.W. Major

Although the Paiutes worked out an accommodation of sorts with the Mormon immigrants, the settlers’ occupation of lands that the Utes used for hunting and gathering, along with Mormon attempts to suppress the New Mexican trade, disrupted the Ute economy and society. With such highly combustible tinder laid, a seemingly isolated spark set the territory afire with war. On July 17, 1853, several Utes were trading at James Ivie’s home near Springville when Ivie intervened in a dispute between a Ute man and his wife over her failure to strike a good bargain. Ivie tried to prevent the couple and a companion from carrying their dispute into his cabin. In the ensuing melee, Ivie killed one of the men, a relative of Walkara’s named Shower-O-Cats.

Under orders from Col. George A. Smith, Capt. Stephen C. Perry of the Springville Militia led a unit the next day into Walkara’s camp about five miles up Payson (then Peteetneet) Canyon to try to mollify the outraged Utes. Perry discussed the matter with the Utes for a time. Then, when he and his troops realized that they risked death at the hands of the infuriated Utes, they beat a hasty retreat.

Walkara bargained with the settlers, demanding the usual Numic retribution–the death of one Euro-American. The settlers refused to pay that price, and two of Walkara’s associate chiefs, Arapeen and Wanship, opposed compromise. Taking some of his followers to Payson, Arapeen killed a guard named Alexander Keel. Recognizing that Keel’s death would bring the wrath of the Mormon settlers on his followers, Walkara led his people on a flight up Payson Canyon. On the way, they fired on settlers’ cabins and stole about twenty head of cattle and six horses.

Hearing of Keel’s death and apparently assuming that Walkara would follow the Mount Nebo loop into Salt Creek Canyon on his way into Sanpete Valley, Col. Peter W. Conover of the Utah County Militia sent several units up Payson Canyon and personally led a punitive expedition of 150 men up Salt Creek Canyon toward Manti to try to intercept Walkara and his followers.

General Wells apparently recognized the gravity of these clashes. Dreading a return to the bloodshed of 1849 and 1850, Wells ordered Conover to disband his troops and to act entirely on the defensive. Before he received the orders, however, Conover had sent out a patrol to attack a Ute camp east of Mount Pleasant (then Pleasant Creek) in Sanpete Valley. The militiamen killed six Indians in a skirmish.

After receiving Wells’s orders, Conover prepared to return to Utah Valley, but in the meantime, Wells and Young issued further orders that anticipated even more thorough disengagement. Ordering George A. Smith to assume command of all units south of Salt Lake County, they instructed the settlers to abandon small outlying settlements and to gather in larger communities with secure forts. As an extra precaution, they ordered all settlers to avoid activities that took them away from the settlements alone or in small groups. Also, in an apparent attempt to remove the temptation for raiding, they ordered the settlers to immediately send all stock not needed for teams and milk to Salt Lake City for safekeeping. Later, Smith relieved Conover of command and arrested him for his failure to implement the defensive and conciliatory policy in Utah Valley.

Smith encountered considerable hostility to his efforts to effect the policy of defense and conciliation. Walkara made Smith’s job more difficult since his soldiers attacked the settlers at Spring City (then Allred Settlement) in Sanpete Valley, driving off virtually all the community’s livestock. Smith also encountered an open rebellion and had to accept the resignation of the Cedar City Militia commander, Maj. Mathew Caruthers, before the community agreed to send their stock to Salt Lake. Supervising the withdrawal of settlers to Parowan and Cedar City, Smith collected stock from the various settlements and sent them northward. Attacks continued into August 1853 as Utes tried to take a Salt Lake-bound herd of surplus cattle near Clover Creek in the Rush Valley. The war spread into northern Utah as Utes attacked four men hauling lumber near Park City, killing two and wounding one other.

Walkara left for northern Arizona for the winter, but Wyonah, brother to Shower-O Cats, and other sympathetic Utes continued fighting. During the fall, Utes killed and mutilated settlers, most of whom were working in isolated parties outside the towns in defiance or disregard of the orders to remain in large groups. Such attacks occurred at Fillmore, Fountain Green, Santaquin, and Manti. Raids included the burning of Spring City, which the settlers had already abandoned, and the theft of a large herd of cattle near Spanish Fork.

Instead of following a conciliatory policy as Young had directed, Mormon settlers responded in brutal kind. A militia unit in Utah County assaulted a Ute camp near Goshen, killing four or five people. At Nephi, on October 2, 1853, after eight or nine Utes came to the fort seeking protection, a group of townspeople slaughtered them “like so many dogs” and then reported the murders as deaths during a skirmish.

Undoubtedly, the murders with the greatest long-range consequence occurred on the early morning of October 26, 1853, when Capt. John W. Gunnison of the Corps of Topographical Engineers and a party of seven had camped on the lower Sevier River in Pahvant territory. The murder of Gunnison and his party by the Pahvants may have come in retaliation for the death of a Pahvant killed by members of a passing wagon train. Alternatively, the deaths—like those of settlers working outside in small parties—may have resulted from their distance because of fortified settlements. More seriously for the Utah settlers, however, anti-Mormons attributed the death to Mormons acting under Brigham Young’s instructions.

Gunnison had previously assisted Captain Howard Stansbury, a topographical engineer, on explorations in northern and central Utah. In 1849, Col. John J. Abert of the Corps of Topographical Engineers had assigned Stansbury to retrace the route from Fort Leavenworth to Fort Hall; explore a wagon road from the fort to the Great Salt Lake; examine the suitability of the lake for transshipment of supplies form the Mormon settlements; survey the lake, the Jordan River, and Utah Lake; determine the capacity of the Mormons to provide food and supplies for overland travelers; report generally on the Mormon economy; and locate a site for a military post near Salt Lake. The explorations of Stansbury and Gunnison, aided by Brigham Young’s secretary Albert Carrington, led to the publication of Stanbury’s report and Gunnison’s book The Mormons in 1852, both of which offered favorable accounts of the Saints at a time when most national observers considered them in about the same category as we would consider cultist fanatics today.

In 1853, Col. Abert ordered Gunnison to survey a strip of land between the thirty-eight and thirty-ninth parallels as part of a search for a transcontinental railroad route. Anxious to determine the most feasible and politically acceptable route from the Mississippi Valley to the Pacific Coast, Congress had authorized four surveys of possible transcontinental corridors. Gunnison found the thirty-eighth parallel route unsuitable for a railroad, but his decision to camp on the Sevier bottoms suited the Pahvants quite nicely.

Following the violence of late 1853 and early 1854, a number of Ute leaders offered terms for peace. In spite of some raids in January and February 1854, Ute bands, camped in central and southern Utah and headed by Chiefs Amon and Migo, said they were ready to lay down their arms. In March and again in May, Walkara, who had since returned from Navajo country, petitioned the settlers and Brigham Young for peace as well. Ever the shrewd trader, Walkara asked for food, guns, and ammunition, offering to sell portions of central Utah lands in return for annuities to be paid in cattle and horses over a twenty-year period. In addition, he wanted security for his trade in Paiute captives.

Young also favored the renewal of normal relations and an end to war and murder. Trying to work out an agreement, Young and Walkara met at Chicken Creek in Juab County on May 11, 1854. After Young arrived at Walkara’s camp, the proud chief refused to come out of his tent to greet Young, insisting that the governor come to him instead. Recognizing a tense and potentially explosive situation, Young and George A. Smith walked to Walkara’s tent. After they arrived, they found one of his daughters seriously ill. Touched by her suffering, they gave her a healing blessing.

Although the negotiations at Chicken Creek ended the immediate conflict, they solved none of the underlying issues. In fact, they left open wounds that continued to ooze the blood of Utes and Mormons through the Black Hawk War of the 1860s. In February 1856, the Tintic War, a series of skirmishes named after a Ute subchief, inflamed the people in the Tintic and Cedar Valleys, largely because Indians, who were starving in the drought, began taking cattle from the settlers. The war resulted in a number of clashes and deaths.

The wars ended only after the federal government removed the Utes to the Uintah and Ouray Reservation in the Uinta Basin during the late 1860s and early 1870s. Since the federal government did not buy the Ute lands, the issues festered until after World War II, when the Indian Claims Commission ordered payment for confiscated lands. Mormons forced the end of the New Mexican trade in human beings, but only at the cost of continued payment for the servants themselves.