Beginning with World War I, events in Utah generally echoed the national scene. Utah made her contribution to the war effort and her businesses enjoyed temporary prosperity. The 1920s and the 1930s in Utah were marked by increased union activity, particularly in the coal and copper industries. In 1933 the United Mine Workers of America finally succeeded in unionizing the Carbon County coal mines.

The Great Depression of the 1930s hit Utah especially hard. Unemployment was already widespread in mining and agriculture, and conditions worsened for a number of reasons. Severe droughts hit farmers hard in 1931 and 1934. High freight rates limited the expansion of manufacturing. Not until the New Deal programs such as WPA and the CCC came to Utah with a variety of cultural and reclamation and conservation projects was recovery, although slow, in sight. 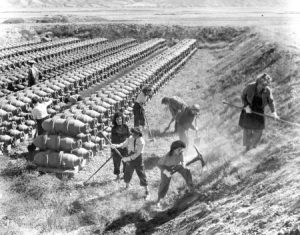 With World War II came an increased demand for food production that boosted Utah agriculture. Important military installations, the Geneva steel plant, and other war-related industries brought new payrolls to the state. Utah was also the scene of prisoner of war camps and of Topaz, one of the relocation camps for Americans of Japanese ancestry.