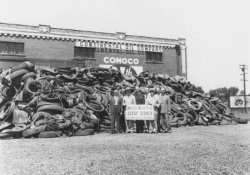 Patriotism characterized life on the home front during World War II. On 2 January 1942, a large front-page headline in the Roosevelt Standard read:

For a Happier New Year Resolution
I Resolve To Give First Consideration During
1942 To The Defense Effort Of My Country!

Five days after Pearl Harbor, the Uintah Basin Record reflected on the feelings and the commitment of the county towards the war, “We are at War. It gives us a feeling of sorrow and apprehension indeed, to realize that this, our Christmas edition, must carry on its first page, mingled with news of the approaching Holiday season, the stirring accounts of the entrance of the United States into the war…Of this we can feel sure though; whatever the cost, however long the time, America, united, can and will pay the price and give the time to win…We here in the Basin will probably see no great change; we should not be in danger of air raids or other form of attack, we have no air fields, army posts or munitions factories to take on an increased tempo. But we will be affected just the same. Many of our young men are right now in the thick of the conflict either as fighters or civilian workers; we will be called on without delay to start bearing an increased proportion of the costs, we will have to give up many of the things we would like to have, we must begin to produce and conserve far out of proportion to our own requirements…[W]e will do all this cheerfully and freely, secure in the belief that America is great enough and right enough to win what her people will.”

During the war, at least half the space of every issue of the local newspapers included coverage of the war, keeping county residents abreast of the conditions at home and overseas. War pictures, stories, reports on progress, and even propaganda were commonplace in the Roosevelt Standard. Photos and drawings caricaturing Hitler, Hirohito, and Nazi and Japanese soldiers appeared frequently. Even before Pearl Harbor, farmers and ranchers of the county were asked to become involved in producing more food. J. Edgar Holder, chairman of the county’s agricultural defense board, directed the county’s agricultural production effort. In the fall of 1941 Holder urged all farmers to put forth great effort. He conducted a countywide agricultural survey in which he asked each farmer to prepare a food defense plan, “giving the extent to which his farm can contribute to the county. Food for Freedom’ production goals.” In addition, each farmer was asked the number of cows milked the previous year, the number of hogs marketed and slaughtered, the number of cattle marketed, and the number of eggs produced. Holder then asked what each farmer could do “to help meet the [production] goals for these commodities in 1942.”

Throughout the war farmers were continually encouraged to produce more. Local newspaper headlines such as “Farmers Stay On the Farm” and “Fight On The Farm” were common. Even with an increase in agricultural production however, all Americans were required to accept rations of food, fiber, and energy.

Women of the county took up the slack on the farms. Working side-by-side with their husbands or fathers and with young children of the family, women milked cows, branded and castrated cattle, and planted, irrigated, and harvested crops. All families were encouraged to plant large gardens for their own use. Like their mothers or older sisters during the Depression years, county women of the 1940s were asked to make continued sacrifices, including making their own clothes.

Marvella Bowden Wilkerson recalled living with a small child and without her husband for most of the war. In September 1941, before Pearl Harbor was attacked, she married Woodrow Wilkerson of Neola. Wilkerson provided for his new bride that fall and winter by working at a variety of odd jobs, including topping beets in Axtell, Sanpete County, and hauling coal from Price to the Uinta Basin. The following summer the couple moved to Ogden where he took a job at the newly constructed Hill Field (later renamed Hill Air Force Base). The job only lasted only a few months before he was drafted in December 1942. The next month, while Woodrow was at boot camp, Marvella delivered their first baby.

In August 1943 Woodrow was sent to Europe; he served there until November 1945 when he returned to the Uinta Basin. He and his small family then took up residence in a two-room log cabin on a forty-acre homestead in Neola he had purchased from his parents. Their new house was without electricity or running water. Water came from a cement cistern in front of the cabin that was filled with irrigation water from a nearby ditch. They raised hay and milked a few cows on their forty-acre farm, just one of the many families of the area who struggled through the war years and their immediate aftermath.

To control prices, President Roosevelt established the Office of Price Administration in April 1941. After war was declared prices were frozen and various goods were allocated through a system of rationing. County rationing boards were organized to establish and monitor the numerous commodities rationed for agriculture and consumer consumption…As the war progressed, additional commodities and consumer goods of all kinds were added to the rationing system—gas, meat, sugar, cheese, and nylon hosiery, to mention a few. Ammunition was also rationed; purchasing bullets for hunting required a coupon. Everyone was encouraged to conserve, and rationing stamps were common.

Duchesne County farmers and ranchers received proportionally more coupons for gasoline and for rubber tires than did their city cousins. It was critical for the war effort that farmers and ranchers across the county continue to be productive. A small black market in ration coupons and stamps emerged in the county, although the vast majority of residents endeavored to contribute to the war effort by their careful and proper use of stamps and coupons.

Along with rationing came various salvage and recycling efforts. People were encouraged to save grease, rubber, tin, metals, and paper. Labrum’s gas station in Roosevelt was the collection center for used tires and other rubber items. In one salvage project the county collected twelve tons of paper. Children in the county participated in saving and collecting scraps of tinfoil. Emptied tin tubes of toothpaste had to be exchanged at stores before a new tube could be purchased. Salvage bins for small items were found in all stores of the county.

Families in the county were encouraged at school and in church to plant “victory gardens” to supplement their food supply and make them less dependent upon national food supplies. Families living in Roosevelt, Myton, and Duchesne were asked to convert some of their lawns to gardens. Articles in the Roosevelt Standard encouraged and informed people how to best utilize some of their yard in gardening. The county Future Farmers of America (FFA) assisted people in the tasks of getting started. Young children, Boy Scout troops, 4-H clubs, and others were asked to collect milkweed pods. Fiber from the milkweed pods was used to fill lifejackets of marines and navy personnel. The Roosevelt Standard reminded the children that by collecting the milkweed pods they might be saving the life of their father, older brother, uncle, or friend.

The government asked a great deal of its citizens, and Duchesne County, for the most part, responded with patriotism and sacrifice both at the battlefront and on the home front. Financing the war in part came from the sale of war bonds, and during the course of the war seven bond drives were held. Quotas were set to encourage the purchase of war bonds. Several of the bond quotas rivaled the annual budget of the county; for instance, the county budget for 1942 was $77,091 and the war-bond quota for the year 1944 was $96,100. The county met or exceeded every bond quota except for the last one, which ended after victory was achieved.

One of the important domestic concerns of many Americans following the attack on Pearl Harbor was the prejudice against Americans of Japanese ancestry. A vast majority of these people resided on the Pacific coast, and many government officials saw them as a security risk. As a result, President Roosevelt issued Executive Order 9066, which set in motion the forced removal of more than 125,000 Japanese-Americans from the west coast. The Topaz Relocation Camp, located in western Millard County a few miles northwest from Delta, was created in the summer of 1942, and by September the first of its 8,232 internees began arriving in the bleak environment. At first, Governor Herbert Maw was opposed to housing the Japanese people in the state, but he soon agreed. In March 1942, Duchesne County officials contacted Governor Maw to offer 2,000 acres south of Myton as a work camp for the evacuees. The governor never accepted the offer, but work camps located elsewhere in the state were established by the spring of the following year.

As a growing number of the county’s young men and women went off to war, an increasing number of other county residents began to leave the county for defense work along the Wasatch Front or elsewhere in the West. Several defense installations and defense industries were begun prior to December 1941 or were greatly enlarged shortly thereafter including Lehi Refactory and U. S. Steel Geneva Works in Utah County; Fort Douglas, Eitel McCullough Radio Tube Plant, Remington Small Arms Plant, and Utah Oil Refinery in Salt Lake County; Clearfield Naval Supply Depot, Hill Field, Ogden Arsenal, and Utah General Depot in Weber County; and Wendover Air Field, Tooele Army Depot, Dugway Proving Grounds, and Deseret Chemical Depot in Tooele County. All needed workers, both men and women, and all paid good wages.

Edward and Opal Barton, for example, moved from their farm in Boneta to Salt Lake City for the winter of 1943. Edward Barton worked in a meat plant and his wife found employment at the Remington Arms plant. Wilma Iorg (Noakes) left Upalco and became a journeyman welder at Hill Air Field. For some county residents, the move to the Wasatch Front was a permanent relocation; many found permanent wages and regular work shifts more attractive than the long hours and uncertainty of making a living on a farm in Duchesne County. During the decade of the 1940s, the county’s population decreased by slightly more than 800—which was about a nine percent decline—from 8,958 to 8,134. Of all the communities in the county with recorded population figures, only Roosevelt showed an increase of population during the war—from 1,264 in 1940 to 1,628 in 1950, a healthy 28.8 percent increase. Other community population figures showed Tabiona with a 24.2 percent decrease, Mt. Emmons down by 24.7 percent, and Arcadia with a 31.7 percent decrease.

As victory drew closer for the Allies, the several local newspapers provided their readers with personal accounts of the war through letters received from the war fronts in Europe and the Pacific. More often than not, good news was reported. In May 1945, a month before victory in Europe, Mr. and Mrs. Eugene Harmston of Roosevelt received the good news that their son, Lt. Howard L. Harmston, had been liberated from a prisoner-of-war camp. In February 1944 his B-17 had been shot down over Germany and he had been captured. In June 1945 the Uintah Basin Record was pleased to print that Pfc. Alva Defa, son of Mr. and Mrs. Andrew Defa, was also liberated from a German prison camp. He had been missing since December 1944. Pvt. Carl Rhoades of Hanna provided his parents with a report of crops being grown in Italy and Germany: “The days are getting awfully warm now. Some of the grain looks almost ready to cut.” Ending on a positive note, he penned, “I hope you have the crops in at home. Don’t forget to plant an extra potato, as I may be there to help eat one or two this fall.”