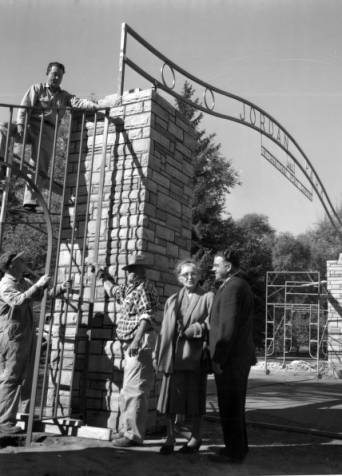 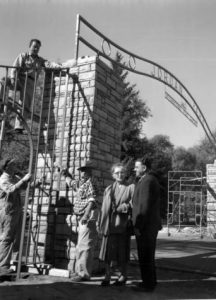 “First in war, first in peace…” describes this woman’s efforts.

Born on June 25, 1886, to William N. and Mary Hazlet in Leon, Iowa, Ruey attended Iowa State Teachers College and taught school in Leon before her marriage on June 22, 1910, to Otto A. Wiesley. In 1921 the Wiesleys moved to Richmond, Utah. Ruey served as matron, librarian, and dean of girls at North Cache High School and taught bookbinding, basketry, and campfire cooking to Richmond’s Boy Scouts. Then in May 1927 the Wiesleys made Salt Lake City their permanent home. They raised three sons, Bruce, Vere, and Keith.

An active member of a dozen civic organizations from the American Legion Auxiliary to the Parent Teachers Association, Wiesley had developed a keen interest in serving others early in life. Over the years her efforts included first aid classes, community concerts, civil defense, Red Cross and Salvation Army drives, Girls State, work with amputees at Bushnell Hospital, a bill requiring the U.S. flag to be displayed at polling places, promotion of fingerprinting as a means of positive identification, tree planting and other beautification projects, creating specially designed Easter eggs for neighborhood children, and sharing her family’s Thanksgiving dinner with college students who could not go home for the holiday.

Two major projects absorbed this energetic woman in the 1940s. Following a visit to a peace garden in Cleveland, Ohio, in 1939, Wiesley proposed a similar garden for Utah. The Salt Lake City Council of Women greeted the idea with enthusiasm. Wiesley became president of the organization in May 1941, but before plans for the peace garden could be implemented, the bombing of Pearl Harbor on December 7, 1941 made war rather than peace the priority of the day. In her presidential message she had urged Council of Women members “to acquire a sane attitude on the many problems that confront us. When democracy is at its tottering point, when the moral fiber of a nation is frayed at the edges, it is the housewife, the mother, the homebuilder, who replenishes the world with the strength of purpose and thought needed for such a battle.”

Responding to her country’s call, Wiesley accepted appointment in August 1942 as chairwoman of the Women’s Division of the Utah War Finance Committee. Realizing that the success of war bond drives would depend upon an organized network of volunteers in every community, she named a chairwoman in each county who then organized each town in the county. The Women’s Division sold some $37 million in war bonds and received citations from the federal government. Wiesley herself volunteered 6,000 hours to this project and traveled 30,000 miles on behalf of bond sales.

When the war ended Wiesley again took up the cause of international understanding. With the cooperation of Salt Lake City a section of Jordan Park, 1060 South 800 West, was set aside for the International Peace Gardens, and the Salt Lake City Council of Women made Wiesley permanent chairwoman of this project. It was not always easy to get so many different ethnic groups to work toward a common goal, Wiesley said, but she considered the promotion of brotherhood one of the most worthwhile endeavors of her life. When the International Peace Gardens were dedicated on August 15, 1952, they symbolized the culmination of her 23-year dream.