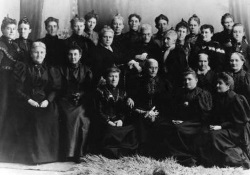 Susan B. Anthony with suffrage leaders from Utah and elsewhere

Women’s Suffrage—the right of women to vote—was won twice in Utah. It was granted first in 1870 by the territorial legislature but revoked by Congress in 1887 as part of a national effort to rid the territory of polygamy. It was restored in 1895, when the right to vote and hold office was written into the constitution of the new state.

In sharp contrast to the long fight for women’s suffrage nationally, the vote came to Utah women in 1870 without any effort on their part. It had been promoted by a group of men who had left the Mormon church, the Godbeites, in their Utah Magazine, but to no immediate effect. At the same time, an unsuccessful effort to gain the vote for women in Utah territory had been launched in the East by antipolygamy forces; they were convinced that Utah women would vote to end plural marriage if given the chance. Brigham Young and others realized that giving Utah women the vote would not mean the end of polygamy, but it could change the predominant national image of Utah women as downtrodden and oppressed and could help to stem a tide of antipolygamy legislation by Congress. With no dissenting votes, the territorial legislature passed an act giving the vote (but not the right to hold office) to women on 10 February 1869. The act was signed two days later by the acting governor, S. A. Mann, and on 14 February, the first woman voter in the municipal election reportedly was Sarah Young, grandniece of Brigham Young. Utah thus became the second territory to give the vote to women; Wyoming had passed a women’s suffrage act in 1869. No states permitted women to vote at the time. 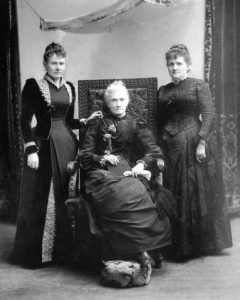 Despite efforts of national suffrage leaders to protect the vote for Utah women from congressional action, it was taken away by the Edmunds-Tucker antipolygamy act in 1887. It was clear that a strong organizing effort would be needed to restore it.

Utah women, both Mormon and non-Mormon, had become active in the National Woman Suffrage Association, but were divided over the suffrage issue within Utah. Many non-Mormon suffragists supported the principle of universal suffrage but held that granting the vote to Utah women would only strengthen the political power of the Mormon church.

In 1888 Emily S. Richards, wife of the Mormon church attorney, Franklin S. Richards, approached church officials with a proposal to form a Utah suffrage association affiliated with the National Woman Suffrage Association. With church approval, the territorial association was formed on 10 January 1889 with leading roles given to women who were not involved in polygamous marriages. Margaret N. Caine, wife of Delegate to Congress John T. Caine, was the president and Emily Richards was appointed a state organizer. Acting quickly, Mrs. Richards organized local units throughout the territory. Many, if not all of them, sprang from the women’s auxiliary organizations of the church, most notably the Relief Society. The Woman’s Exponent, an unofficial publication for Mormon women, took up the cause with zeal. Yet progress was stalled until the 1890 Manifesto officially declared an end to plural marriage, and Congress passed the 1894 Enabling Act, opening the door to statehood.

With statehood in sight, the women swung into action, resolved that the right to vote and hold office would be put into the new constitution. They managed to get planks favoring women’s suffrage into both Democratic and Republican party platforms in 1894 but realized that more grassroots organizations must be formed to apply political pressure to the 107 male delegates elected to the Constitutional Convention. By mid-February of 1895, nineteen of Utah’s twenty-seven counties had suffrage organizations. Most of the delegates were inclined to vote for the enfranchisement of women; but there were those, including the influential Brigham H. Roberts, member of the church’s First Council of Seventy, who felt otherwise.

The final struggle for suffrage began with the convening of Utah’s constitutional convention in March of 1895. In lengthy debates, Roberts and other opponents expressed fears that if women’s suffrage became part of the new constitution it would not be accepted by Congress. Some non-Mormon delegates feared that Utah women would be used as pawns by their husbands and church leaders to threaten the rights of the non-Mormon minority. Others argued that women’s traditional roles as wife and mother were threatened and that women were too good to get into the dirty mire of politics. Proponents ridiculed these arguments, contending that women should be given the vote as a matter of simple justice and that they would be a purifying and cleansing force in politics.

Despite a move to put the matter to a separate vote, supporters of women’s suffrage managed to get it written into the new Utah Constitution by a comfortable majority. The new document was adopted on 5 November 1895 with a provision that “the rights of citizens of the State of Utah to vote and hold office shall not be denied or abridged on account of sex. Both male and female citizens of this state shall enjoy equally all civil, political and religious rights and privileges.”

Utah women probably succeeded in 1895 where women elsewhere had failed because their efforts were approved by leaders of the main political force in the state—the Mormon church. Leading suffragists, in addition to Margaret Caine and Emily Richards, included relatives and friends of church leaders: Emmeline B. Wells, editor of the Exponent; Zina D. H. Young, wife of Brigham Young; Jane Richards, wife of Apostle Franklin D. Richards; and Sarah M. Kimball, among many others. They could not be dismissed as fire-eating radicals. They were highly skilled at organizing women and mobilizing political support. They could also point to the period when Utah women had voted—without noticeable harm to themselves or the Territory. Thus they won a right granted at that time only in two states, in a struggle unique to Utah in its entanglement with the issues of polygamy and statehood.