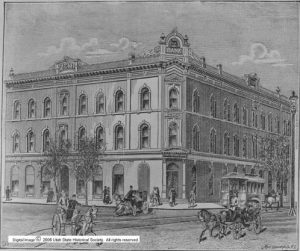 Zions Cooperative Mercantile Institution, known as ZCMI, the “People’s Store,” is what one historian called America’s First Department Store, and was founded in March 1868. By that date the Latter-day Saints had lived in the Great Basin for little more than two decades but had already foreseen a new threat to their peace and prosperity with the coming of the railroad. To combat the inevitable change that territorial growth would bring Brigham Young gathered a group of community and business leaders to form an organization of community-owned merchandising dedicated to the support of home manufacturing and to sell goods “as low as they can possibly be sold, and let the profits be divided among the people at large.”

This organization was christened “Zions Cooperative Mercantile Institution” and although ZCMI was itself never a true cooperative, it spawned a region wide system of local cooperatives owned and operated by the people. Sales totaled over $1.25 million the first year. The store sold a wide variety of goods including clothing, wagons, machinery, sewing machines and carpets—all available to member cooperatives at the same price as in Salt Lake City. ZCMI served as an outlet for the products produced by the Saints themselves as well as “states” goods.

Opening in 1870 the “Big Boot,” as the shoe factory was often called, soon manufactured 83,000 pairs of boots and shoes yearly. Two years after the opening of the shoe factory, ZCMI began production of its own line of work clothes in a new clothing factory, soon to be famous for its “Mountaineer” overalls. 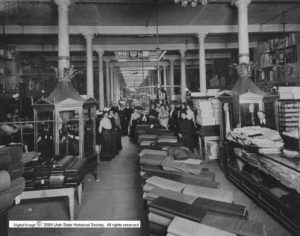 ZCMI first opened for business in 1869. It moved to its most notable location on Main Street in 1876 and its façade was completed in 1901-1902 by architects William H. Folsom and Obed Taylor.

In 1876 many of the several departments were consolidated under a single roof. The impressive three-story brick-and-iron facade of ZCMI stretched long down Salt Lake City’s Main Street. A wing added in 1880 doubled the square footage of this landmark in Salt Lake’s business district.

ZCMI met the twentieth century with the same ideals that had always identified its business. The philosophy–that individual fortunes and private profits should be subservient to the good of the community–would continue throughout the company’s history. Growth became the new byword. In 1961 ZCMI moved to the suburbs with 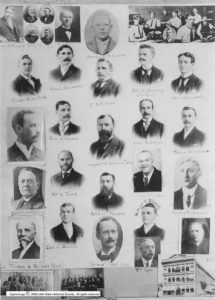 large modern branch stores at the Cottonwood, Valley Fair and University Malls, as well as in Ogden and Logan. ZCMI’s 120-year history has seen the store change from a provincial cooperative to a publicly owned and widely respected shareholder entity. Although ZCMI is a publicly owned company with upwards of 1,400 stockholders, its ties to the Mormon church are still strong. In 1988 the Mormon church owned 51 percent of ZCMI’s stock. ZCMI was sold to Meier and Frank company in December 1999.