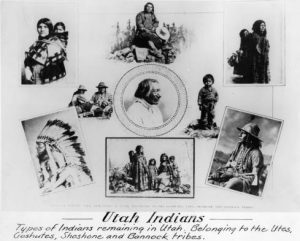 Long before Euro-Americans entered the Great Basin, substantial numbers of people lived within the present boundaries of Utah. Archaeological reconstructions suggest human habitation stretching back some 12,000 years. The earliest known inhabitants were members of what has been termed the Desert Archaic Culture—nomadic hunter-gatherers with developed basketry, flaked-stem stone tools, and implements of wood and bone. They inhabited the region between 10,000 B.C. and A.D. 400. These peoples moved in extended family units, hunting small game and gathering the periodically abundant seeds and roots in a slightly more cool and moist Great Basin environment.

About A.D. 400, the Fremont Culture began to emerge in northern and eastern Utah out of this Desert tradition. The Fremont peoples retained many Desert hunting-gathering characteristics yet also incorporated a maize-bean-squash horticultural component by A.D. 800–900. They lived in masonry structures and made sophisticated basketry, pottery, and clay figurines for ceremonial purposes. Intrusive Numic peoples displaced or absorbed the Fremont sometime after A.D. 1000.

Beginning in A.D. 400, the Anasazi, with their Basketmaker Pueblo Culture traditions, moved into southeastern Utah from south of the Colorado River. Like the Fremont to the north the Anasazi (a Navajo word meaning “the ancient ones”) were relatively sedentary peoples who had developed a maize-bean-squash-based agriculture. The Anasazi built rectangular masonry dwellings and large apartment complexes that were tucked into cliff faces or situated on valley floors like the structures at Grand Gulch and Hovenweep National Monument. They constructed pithouse granaries, made coiled and twined basketry, clay figurines, and a fine gray-black pottery. The Anasazi prospered until A.D. 1200–1400 when climactic changes, crop failures, and the intrusion of Numic hunter-gatherers forced a southward migration and reintegration with the Pueblo peoples of Arizona and New Mexico.

In Utah, the Numic- (or Shoshonean) speaking peoples of the Uto-Aztecan language family evolved into four distinct groups in the historic period: the Northern Shoshone, Goshute or Western Shoshone, Southern Paiute, and Ute peoples. The Northern Shoshone, including the Bannock, Fort Hall, and Wind River Shoshone (Nimi), were hunter-gatherers who rapidly adopted many Plains Indian traits through trade. They occupied an area mainly north and east of the state, yet periodically utilized subsistence ranges in Utah. The Goshute (Kusiutta) inhabited the inhospitable western deserts of Utah. Derogatorily labeled “Digger Indians” by early white observers, the Goshute were supremely adaptive hunter-gatherers living in small nomadic family bands. They constructed wickiups or brush shelters, gathered seasonal seeds, grasses, and roots, collected insects, larvae, and small reptiles, and hunted antelope, deer, rabbits and other small mammals. The Southern Paiute (Nuwuvi) lived in southwestern Utah, where they combined their hunting-gathering subsistence system with some flood-plain gardening–an adaptation attributable to Anasazi influences. The Southern Paiute were non-warlike and suffered at the hands of their more aggressive Ute neighbors in the historic period.

The Ute (Nuciu) people can be divided into eastern and western groups. The eastern Utes inhabited the high plateaus and Rocky Mountain parks of Colorado and northern New Mexico, and consisted of the Yamparka and Parianuc (White River Utes), the Taviwac (Uncompahgre Utes), the Wiminuc, Kapota, and Muwac (Southern and Ute Mountain Utes). The western or Utah Utes inhabited the central and eastern two-thirds of the state. Utah Ute bands included the Cumumba or Weber Utes, the Tumpanuwac, Uinta-ats, Pahvant, San Pitch, and Sheberetch (Uintah Utes). The Ute were hunter-gatherers who quickly adopted the horse and buffalo culture of the Plains Indians. They became noted raiders and traded horses between the Spanish Southwest and the northern plains. Utes actively participated in Spanish campaigns against Navajo and Apache raiders, and conducted their own slave trade with the Spanish against the Southern Paiute and Navajo. Utes lived in brush wickiups or skin tepees and traveled in extended family units with seasonal band congregations. There was only a general sense of “tribal” identity with the other Ute bands, based on a common language and shared beliefs. 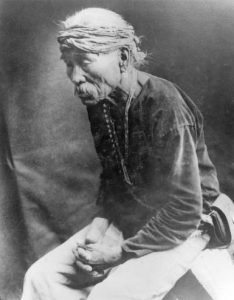 By the year 1700 Navajos began to move into the San Juan River drainage area of Utah in search of pasture for their herds of Spanish sheep and goats. The Navajo (Dine) were recent immigrants to the Southwest—migrant Athabaskan-speaking peoples from the subarctic who arrived sometime between A.D. 1300 and 1400. The Navajo were highly adaptive hunter-gatherers who incorporated domestic livestock and agriculture into their subsistence system. They lived in dispersed extended family units in northern Arizona, New Mexico, and southeastern Utah, dwelling in hogans. While maintaining fair relations with the Spanish and Pueblo peoples, Navajos came under intense pressure from raiding Utes from the 1720s through the 1740s, forcing many to retreat from Utah.

Numerous explorers and trappers–Rivera, Dominguez and Escalante, Provost, Robidoux, Ashley, Ogden, Smith, Carson, Bridger, and Goodyear—ventured through Utah between 1776 and 1847, making contact and trading with the Native American peoples. They established economic relations but exerted little if any political control over the native peoples of Utah. When the Mormon migration began there were more than 20,000 Indians living in Utah proper.

The Mormons settled in the Salt Lake Valley in 1847—a neutral or buffer zone between the Shoshone and Ute peoples. Conflict between Mormons and Indians did not really begin until Mormons extended their settlements south into Utah Valley—a major trade crossroads and subsistence area for the Ute people. Brigham Young espoused a moderate Indian policy in line with Mormon theological beliefs that Indians were “Lamanites,” with an ancestry in the tribes of Israel. Young counseled that it was cheaper to feed than to fight the Indians, and he instituted some token missionary efforts among them. Yet, as Mormon settlement expanded north and south along the front range, conflict increased with Indians displaced from traditional subsistence areas. Young countered Ute raiding with an iron fist. The Walker War (1853–54) and the Black Hawk War (1863–68) revolved around Indian subsistence raiding to avoid starvation.

During this period the Indian Bureau and the Mormon church operated reservation farms for the benefit of Indian peoples, but they either proved inadequate or failed completely. Weakened by disease and starvation, Ute Indians faced annihilation or retreat. In 1861 President Abraham Lincoln set aside the Uintah Valley Indian Reservation for the Utah Ute people. In 1881–82 the federal government removed the White River and Uncompahgre Ute from Colorado to the Uintah and Ouray Reservations in eastern Utah. Today these three bands are collectively called the Northern Ute Tribe.

In a series of treaties with the Shoshone, Bannock, and Goshute in 1863 and with the Ute and Southern Paiute in 1865, the federal government moved to extinguish Indian land claims in Utah and to confine all Indians on reservations. The Goshutes refused to leave their lands for either the Fort Hall or Uintah reservations. They lived on in the west desert until granted a reservation in the 1910s. Likewise, the Southern Paiute refused to go to the Uintah Reservation and eventually settled in the uninhabited hills and desert areas of southern Utah. In the early twentieth century the Kaibab, Shivwits, Cedar City, Indian Peaks, Kanosh, and Koosharem groups of Southern Paiutes finally received tracts of reserved land. The small number of Navajo living in Utah increased dramatically following the conquest and imprisonment of the Navajo at the Bosque Redondo in New Mexico between 1862 and 1868. Many moved to the San Juan and Monument Valley regions of Utah, which became part of the Navajo Reservation in 1884.

In 1871 the federal government ended the practice of making treaties and instituted a legislative approach to administering Indian affairs. In 1887 Congress passed the Dawes General Allotment (or Severalty) Act, aimed at breaking up Indian reservations into individual farms for tribal members and opening the rest for public sale. Policy makers intended to detribalize native peoples and turn them into yeoman farmers and citizens; but the policy was largely a failure. Indians resisted farming and most reservation environments limited agrarian success. Allotment did, however, break up the Indian estate. In 1897 and 1904 the Indian Bureau allotted the Uintah and Ouray reservations. Tribal land holdings fell from nearly four million acres to 360,000 acres, and individual sale of Indian allotments further reduced Northern Ute lands. Nationwide, Indians lost more than eighty percent of their lands by 1930. Poverty, unemployment, underdevelopment, and health problems plagued most reservations, and Native Americans became ever more dependent on the federal government.

During World War II a number of Utah Indians distinguished themselves in the armed forces and many more learned trades useful on and off their reservations. In 1948 the Indian Bureau began a relocation program to place Indians in off-reservation jobs in urban America. Many Navajos in particular took advantage of the program which, nationally, was only partially successful at best. Ties to family, culture, and land drew many back to underdeveloped reservations.

Indian policy made a radical swing backwards in the 1950s when Utah Senator Arthur V. Watkins, chairman of the Senate Indian Affairs Subcommittee, promoted passage of an act to terminate all federal responsibility toward Indian tribes. To set an example, Watkins pushed for termination of Utah Indian groups, including the Shivwits, Kanosh, Koorsharem, and Indian Peaks Paiutes, as well as the Skull Valley and Washakie Shoshone. Following termination, these groups rapidly lost control of what little land they had. In 1954, following a long-standing internal dispute, the Northern Ute tribe accepted the termination of mixed-blood Utes who became known as the Affiliated Ute Citizens.

In the late 1950s and 1960s federal Indian policy once again moved back to a more liberal self-determination stance. Native Americans received assistance from the Public Health Service, the Office of Economic Employment, and other federal and state agencies. One major factor in promoting Indian self-determination has been the success of Indian claims against the United States government for violations of treaty agreements. In 1909 the Utes received a settlement of more than $3,500,000. In a 1962 comprehensive claims settlement, the Ute people were awarded nearly $47,700,000, of which the Northern Ute tribe received $30,500,000. In 1986 the U.S. Supreme Court upheld the tribal right to exercise “legal jurisdiction” over all pre-allotment reservation lands. In the 1970s the Southern Paiutes and Goshutes each won settlements of more than seven million dollars. Other important factors in Utah Indian self-determination have been the development of mineral deposits on reservation lands, utilization of water resources, development of recreation and tourism, and industrial development to provide employment for tribal members.

In 1970 the Indian population of Utah was 11,273—an increase from 6,961 in 1960. In 1980 there were 19,158 Native Americans, who were finally approaching the estimated 20,000 Indians inhabiting the state at the time of Mormon settlement. Navajos are the most populous group in the state, followed by the Northern Ute. Today, a significant proportion of Utah’s Indians live and work in urban centers and represent tribal groups from throughout North America.