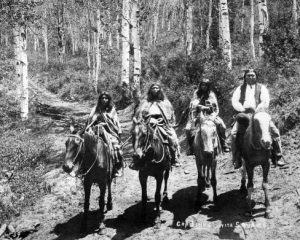 At historic contact, Native American groups living in Utah included the Ute, Southern Paiute, Navajo, Goshute, Northern and Eastern Shoshone. The Ute, Paiute, Goshute, and Shoshone speak different but related languages from a family known as the Numic Language Family. The Navajo speak a language that is in the Athapaskan Language Family.

The Ute, Goshute, Southern Paiute and Shoshone lived similar lifestyles by hunting, fishing and gathering wild plant foods. The pinyon nut was especially important to all of these groups. These groups now live in reservations in Utah, Colorado, Nevada, and Idaho although prior to European settlement, they ranged all across the Great Basin and Intermountain West. Navajo culture during historic times was based upon herding sheep, goats, and cattle. More detailed information on the historic Native American peoples of Utah can be found in Handbook of North American Indians, Volume 10: Southwest and Volume 11: Great Basin. Smithsonian Institution, Washington D.C. 1986; edited by Warren L. D’Azevedo.

The state of Utah is named after the Ute tribe. The Ute once lived over much of Utah and all of western Colorado. In historic times, they ranged well onto the great plains of eastern Colorado into Nebraska and south into New Mexico. In historic times, there were at least 11 different bands of the Ute Tribe. Each band claimed their own territory but membership in a band was fluid. The Ute lived by hunting, fishing, gathering and trading with other Native American groups in the region. Housing consisted of brush structures and conical shaped tipi’s made from animal skins. During the late 1800s, the Ute lost most of their lands and were restricted to reservations in southern Colorado and northeastern Utah.

The Paiute are divided into two groups: the Northern Paiute and the 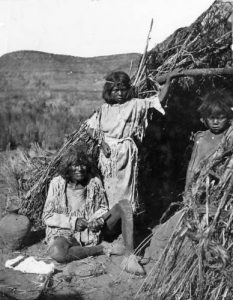 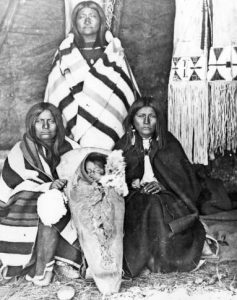 Three Shoshone women and a baby on a cradleboard in the interior of Indian Dick’s lodge. By William H. Jackson, Oct. 10, 1878

Idaho, eastern Oregon and northern Utah was the home of the Northern Shoshone. The Eastern Shoshone lived across western Wyoming, northeastern Utah and northwestern Colorado. Shoshone subsistence revolved around hunting, gathering and fishing. Bison hunting was a important pursuit.

Herding sheep and goats was, and still is, the mainstay of many Navajo families. Southern Utah, northern Arizona, and northern New Mexico is the land of the Navajo; the largest Native American Tribe in the United States. Some scholars believe the Navajo migrated south into their current homeland sometime after A. D. 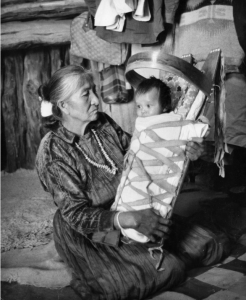 1300 where they lived as hunters and gatherers. In early historic times, the Navajo acquired sheep from the Spanish and they learned to weave from the Hopi. The Hogan is the traditional Navajo house.