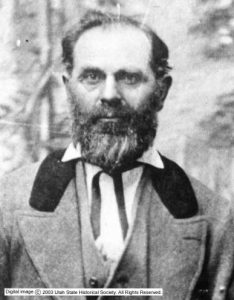 In 1848 a bashful, oversized 21-year-old by the name of John Pulsipher crossed the Plains with his parents and settled in Utah. He found Salt Lake City to be a very quiet settlement consisting of only two blocks of houses joined as two forts. “Besides these forts,” John wrote in his diary, “there was a small saw mill and a corn cracker for a grist mill and a small house by each mill which was the amount of the building in this country at the time of our arrival.”

In his diary, John related the formation of this force. He noted that at the close of a public meeting (i.e., church service) one Sunday in June 1849, the clerk read a list of names of men who had been chosen to staff a police force. An hour and day were appointed for these men to meet with Brigham Young, Jedediah M. Grant, and other city/church officials to obtain their commissions and instructions. Young convened the police meeting by stating: “The time has come to have a company of Police officers to watch over this city. I have made a selection of 40 men such as I can trust–when one of these men is on duty I can keep [secure]–the city is poor, not able to pay you much now; so we must have economy and after which we hope to do better.”

According to John, all 40 of the men accepted the call. Perhaps the qualifications of the other 39 were similar to John’s. He had had prior experience in the Nauvoo Legion (having been admitted at 15 since he was large for his age), and he was steady and sober.

During this meeting John, along with the other men, took an oath of office. He learned that his duties were to see that all people observed the city ordinances and broke no territorial laws and to be on duty at all times and to “put down iniquity whenever we find it as we are passing around and about our work.” The police were not to charge for their vigilance except when they were on night watch, when they would be paid 25 cents an hour–about the same as Utah’s then-current minimum wage. President Young admitted this was “too small pay for men being broke of their rest. But be of good courage,” he said, “for you shall be blessed.” As for police ethics, Young told the group: “If any man asks for your authority knock him down with your cane. Serve my boys the same way.”

The police brigade subsequently met each Sunday between the two church meetings to “post each other in the line of duty.” John did not mind these gatherings, finding them to be “of great benefit” by way of instruction, shared news, and no doubt camaraderie.

John served as a Salt Lake City police officer for four years. He later wrote that many incidents occurred during his tour of duty, but “I have not time to write it.” On occasion he was gone a full day or even two chasing thieves and tracking down stolen property such as cattle and horses. Besides his 24-hour volunteer vigilance–a duty filled “while we are about our own business” John served one-half night of watch duty per week, taking the irregular hours in stride. Night work “would scarce ever hinder me from my daily labor,” he noted. “I have tended mill so much, worked all day and half of the night that I don’t need as much sleep as some think they do.”