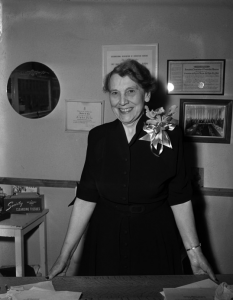 From 19 small conventions that brought Salt Lake City businesses $4,000 in trade in 1929, Winifred Preston Ralls had by 1951 boosted those figures to 270 conventions worth an estimated $18 million. A native of Kansas, she served as a secretary in the Oklahoma Attorney General’s office before taking up the study of law. For five years she worked as a court reporter for the U. S. District Court in Ardmore, Oklahoma. During World War I she was secretary and then manager of the Oklahoma State War Savings Commission. Widowed early in her marriage, Ralls moved to Pueblo, Colorado, in search of a higher, drier climate for her daughter’s health. There she embarked on a new career in promotion with the Pueblo Chamber of Commerce. Her success in that post came to the attention of the Salt Lake City Chamber of Commerce which, in the words of Salt Lake Tribune reporter Grace Grether, “lured her here as assistant to its newly organized convention bureau. Five months after her arrival, Mrs. Ralls became its chief—the only woman to hold such a position in the United States.” She worked for the Chamber from 1930 to 1952.

Ralls quickly came to know and love her adopted state. She told Grether that “Salt Lake City and Utah, and all the rest of the scenic intermountain west, soon will become the travel mecca of the world… that they would have been that long ago if only someone had done a better job of press-agenting our attractions abroad.” Ralls worked tirelessly at promoting Utah, and it must have been a hard sell during the depression years to convince convention organizers to come to Utah. At the time of the Grether interview in 1938, still a depression year, Ralls had by the end of July booked 106 conventions, 16 of them national, in Salt Lake City. Some 63,885 people had visited the city and spent close to $3.2 million. That had to be good news for the city’s hotels, restaurants, and retailers.

Persistence was one of the factors leading to her success. In November 1947 Ralls announced that more than 200 conventions were headed toward Salt Lake City the following year. “Some of these big national conventions we’ve been working on for years,” she said. “Once I decide to get an organization to meet in Salt Lake City, I never give up.” One of her triumphs was booking the American Institute of Architects’ 1948 convention; she had been wooing the AIA for 15 years. Other highlights of the 1948 convention business were the 900 to 1,000 delegates expected to attend the National Wool Growers’ Association meeting in January, the Pacific Coast Dental Conference in June with over 2,000 expected, and the National Association of State Highway Officials with some 1,500 to 2,000 people meeting in September. Other groups included the National Federation of Bee Keepers Associations, Boy Scout leaders from the western states, the Association of Dairy, Food, and Drug Officials, the American Naturopathic Association, and the Japanese-American Citizens’ League.

As demanding as her work for the Chamber of Commerce was, Ralls was also an active participant in various organizations. She served as president of the Business and Professional Women’s Club, governor for Utah of the Women’s National Aeronautical Association, board member for the proposed Civic Center (Salt Palace), and organizer of the Salt Lake Women’s Safety Council. She was listed in Leading Women of America in 1938 and in national and international editions of Who’s Who publications.

Ralls retired from the Chamber of Commerce in June 1952, but by October she was evidently feeling restless and accepted the position of convention consultant for the Hotel Utah, working there until the end of 1956. In addition to persistence, Ralls had other qualities that led her to success in the competitive arena of vying for conventions. Reporter Melba Ferguson described her in 1948 as “friendly, tolerant, warmly human, and sparkling with a vital, intense interest in life.” These personality traits surely helped Ralls earn the title “Mrs. Convention” and, more important, helped stimulate Utah’s sagging economy during the depression years.