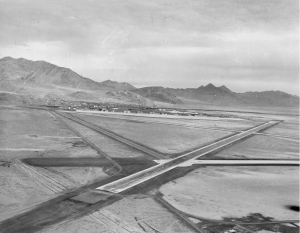 When word reached the nations of the world on 6 August 1945 that the 509th Composite Group had dropped the first atomic bomb on Hiroshima, Japan, most of the personnel of Wendover Army Air Base were just as surprised as anyone, even though the 509th had trained at Wendover, Utah, in Tooele County and practiced with test bombs on the surrounding ranges. Only commanding officer Colonel Paul Tibbets had fully understood the ultimate mission of the group. The project was so secret that even the technicians who assembled and tested components of the bombs in the ordnance area at the south end of the field knew little concerning the nature of the weapons. 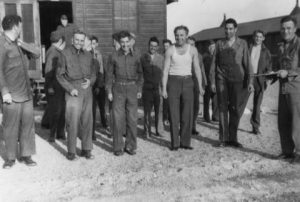 Wendover’s prime mission during World War II was to train the crews of B-17, B-24, and B-29 bombers. Under the direction of the 2nd Air Force, twenty-one bombardment groups were trained at Wendover. One goal of this training was to foster teamwork. The groups were activated, sent to Wendover, formed into complete units, trained together, and then reassigned to other bases or directly to combat zones in Europe or the South Pacific.

The 306th Bombardment Group was the first such outfit assigned for training at Wendover. Equipped with B-17 Flying Fortresses, the group arrived in April 1942. In order for the bomber crews to better practice, lifesize targets of enemy battleships were formed, a city of salt was constructed near the mountains, and an electrical system for night illumination was installed. Beginning in April 1944, 180 fighter pilots successfully trained at Wendover in P-47 aircraft. This program came to an abrupt halt in September 1944 and pilots were quickly transferred to other locations because of the impending formation of the 509th Composite Group at Wendover.

Officially activated on 17 December 1944, the 509th was no ordinary unit. Its mission was without precedent. Equipped with B-29 bombers, it became the first unit organized and trained expressly for atomic warfare. The code name of “Silver Plate” was the military designation for the complicated effort of assembling and training over 1,500 men to drop the first atomic bomb. In preparation for the eventual atomic bomb drops, the 509th flew missions over Japan, employing “pumpkins” which contained conventional explosives. Meanwhile, ordnance personnel at Wendover continued to assemble and test components for the bombs. By mid-July 1945 the necessary modifications to the bombs had been completed to the satisfaction of the scientists. The atom bombs were delivered in late July 1945 to the 509th at Tinian, where technicians and scientists made the required final adjustments. On 6 August 1945, the “Enola Gay,” piloted by Colonel Tibbets, dropped the first atomic bomb, called “Little Boy,” on Hiroshima, Japan. Three days later, the second bomb, known as “Fat Man,” was dropped on Nagasaki, Japan, from “Bok’s Car,” flown by Major Charles Sweeney. Japan quickly surrendered, bringing a swift conclusion to the war. Only later did the people of Wendover realize what their base had housed and been a part of for more than nine months.

The end of the war brought drastic changes to Wendover Field. The need no longer existed for training large numbers of bomber crews for combat, so the number of personnel assigned at Wendover dwindled to approximately 1,000. In December 1945 the army transferred jurisdiction of the base from the 2nd Air Force to the Air Technical Service (later Air Materiel) Command. With the change, the mission at Wendover shifted to weapons development.

As a prelude to the development of the missile industry of the 1950s and 1960s, Wendover began testing and developing three types of missiles: power-driven bombs called “Weary Willies,” glide bombs, and vehicles such as ground-to-air-pilotless aircraft (GAPA). German V-2 rockets, which had plagued Great Britain during World War II, were also taken to Wendover for evaluation.

In March 1947 the Army Air Force transferred Wendover to the Strategic Air Command’s 15th Air Force. Except for the bombing ranges, however, other base facilities were unused. In 1948 the base itself was completely deactivated and was declared surplus the following year. The U.S. Air Force returned the installation to the Air Materiel Command in July 1950; it was placed under jurisdiction of Hill Air Force Base. Only a skeleton personnel crew of thirteen people occupied the base between 1950 and 1954. The temporary structures deteriorated rapidly. Some buildings burned, some were torn down, and others were sold, dismantled, and removed from the base.

In 1954 the Tactical Air Command (TAC) expressed an interest in using Wendover as a gunnery and mobility staging area. Air Force officials reactivated the base on 1 October 1954, placing it under the jurisdiction of the 9th Air Force. Workers renovated and reopened old buildings, extended runways, and constructed new targets on the bombing ranges. New jet bombers and fighters arrived, revitalizing the base. However, the anticipated influx of large numbers of personnel proved to be highly exaggerated. In 1956 the work force totaled only 331 people, and by 1957 there were fewer than 300 people assigned to Wendover.

The Air Force once again deactivated the base in December 1957; the following month it was renamed Wendover Air Force Auxiliary Field. The field was placed under the jurisdiction of the Air Materiel Command, with Hill Air Force Base as caretaker. During the late 1950s and early 1960s the Utah National Guard and various Air Force Reserve and Air National Guard units used the base for summer encampments and other training purposes. In addition, Wendover served as a clear-range area, where new supersonic aircraft such as the X-15 were dropped from larger airplanes and tested.

On 15 July 1961 the Air Force reactivated the field, but with only a firefighting detachment of fifteen men. By 1962 only 128 of the original 668 buildings remained on the dismantled base, and it was again declared surplus. The General Services Administration (GSA) hoped to sell the base to the town of Wendover, with only the bombing ranges and radar site being kept by the Air Force. However, disposal of the base property did not immediately occur.

Air Force units from Hill Air Force Base and Air National Guard units from several states, including California and Montana, continued to intermittently occupy the base and the ranges for training. Renamed Decker Field, the base was again declared surplus in 1972. The fifteen-man firefighting detachment remained the only permanently assigned personnel; this crew stayed at Wendover until 1977. Certain Wendover citizens and members of the firefighting crew broached the idea that the base be considered a possible historical site. They argued that Wendover’s role in ushering the world into the atomic age should not be overlooked or forgotten. The base has now been officially listed on the National Register of Historic Places, placing it under the auspices of the National Historic Preservation Act of 1966.

Since the government desired to relinquish Decker Field, the town of Wendover sought to obtain the base and its remaining facilities. On 9 July 1976, the water system and its annexes were transferred to the city. The GSA deeded the runways, taxiways, hangars, hospital complex, and several warehouses to Wendover on 15 August 1977. Only about 86 acres of the old cantonment area north and west of the flightline and about 164 acres comprising the radar site on the east side of the base were retained.

Since 1977 the old base has had many different uses. Wendover City offices are located in one of the buildings adjacent to the field. Private aircraft make use of the old hangars. The U.S. Air Force has signed yearly lease agreements with the city in order to be able to continue using the runways and facilities for practice takeoffs and landings as well as mock war games. Air Reserve and National Guard outfits still train at Wendover’s facilities.

For several years, mock war games exercises were held at Decker Field. After the traumatic events involving the aborted attempt in 1980 to rescue the hostages from the U.S. Embassy in Tehran, Iran, the Carter administration determined that there was a need to train the military for similar contingencies. Decker Field offered the ideal situation—desert similar to that in the Middle East, high elevation, and remoteness from any active military installation. The exercise scenario to employ what became known as the Rapid Deployment Forces (RDF) was the war games—called Red Flag—conducted by Nellis Air Force Base, Nevada. This was a combined forces training with all the elements of warfare, except use of live ammunition, in life-threatening situations. About 100 aircraft from all U.S. armed services and even from other allied nations arrived for a six-week exercise.

To support this large group of aircraft, about 500 pilots and as many as 5,000 maintenance support personnel were required. The people involved were front-line airmen; they had the opportunity to test their training and tactical skills in an intense, low-level flying event, with simulated ground forces, simulated missile systems, and the electronic equipment to “rebuild” each mission to determine the success or failure of each air crew’s flying skills. More than 9,000 men and women were deployed to Decker Field, Utah, for Red Flag exercises, and some 5,200 sorties were successfully flown, for a total of more than 9,500 flying hours without aircraft accident or mishap.

In 1992 the U.S. Air Force relinquished what remained of Decker Field’s runways and property to the town of Wendover. Although conditions of the runway and ramp have deteriorated beyond economical repair, Air National Guard and Air Reserve units still plan in the future to lease some of the buildings for summer encampments.

Wendover City by the mid-1990s hoped to refurbish the airport to attract more private and some commercial aircraft to the facilities, especially those attracted to the booming resort-casino facilities next door in Wendover, Nevada. However, early in 1998 the Utah legislature refused to appropriate $9 million to the project, feeling that tax revenues could better be spent on other projects. This left the project in limbo and Wendover City facing bankruptcy, as civic officials had hoped to use revenues collected at the airport for other community needs. Later in the year, Tooele County agreed to support the project, bringing new hopes for the area.