The Bonneville Salt Flats of the western Great Salt Lake Desert were formed through the evaporation of the Pleistocene-era Lake Bonneville. The salt flats are actually the bed of that once massive lake which rivaled in size present Lake Michigan. The flats are composed mainly of potash salts ranging in thickness from less than one inch to six feet.

In 1827, trapper, trader, explorer, and frontiersman Jedediah Smith was perhaps the first white man to cross the salt flats in 1827 while returning from his first expedition to California. Six years later, Joseph Reddeford Walker, another trapper, mapped and explored the areas around the Great Salt Lake and crossed the northern perimeter of the flats while in the employ of Captain Benjamin L. E. Bonneville. It is from Benjamin Bonneville that the salt flats and prehistoric lake derive their name, although it is unlikely that Bonneville himself ever saw the flats.

In 1845, John C. Fremont and his expedition crossed through the very heart of the salt flats in an effort to find a shorter overland route to the Pacific. In the following year, Fremont’s route across the flats would come to be known as the Hastings Cutoff.

The Cutoff, promoted by Lansford Hastings as a faster and easier route to California, proved to be just the opposite for the ill-fated Donner-Reed party of 1846. A factor contributing to the Donner-Reed tragedy in the Sierra Nevadas was the delay the party experienced on the salt flats when their wagons became mired in the mud found just below the thin salt crust. Abandoned wagon parts from the party were present on the flats well into the 1930s, and the wheel tracks of their wagons were still visible in 1986 when archaeologists examined several sites associated with the party.

The tragedy of the Donner-Reed Party inhibited extensive use of the Hastings Cutoff as an overland migration trail. The salt flats did, however, yield scientific information to the expeditions of Captain Howard Stansbury in 1849 and of Captain J. H. Simpson in 1859, both with the U. S. Army Corps of Topographical Engineers. 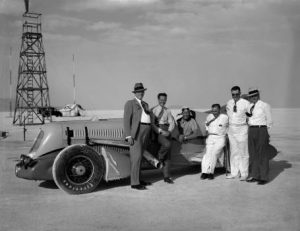 Fifty years after the Donner-Reed party slogged their way across the flats, the area’s first use as raceway was conceived by publisher William Randolph Hearst in a publicity stunt. Hearst hired William Rishel of Cheyenne, Wyoming, to attempt a crossing on bicycle. Rishel completed the journey, crossing the salt flats in 22 hours.

Early attempts to promote automobile racing failed until 1925 when Ab Jenkins, driving a Studebaker, beat a special excursion train by ten minutes in a race across the flats. Since that time the Bonneville Salt Flats have attracted racers from throughout the world and have become the site of numerous land speed records. Their attraction for these racers is due to the hard, flat surface expanse—in an area so flat that from certain perspectives the curvature of the earth can actually be seen.