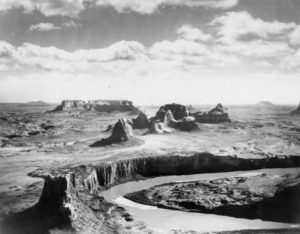 The geological make-up and the erosion by water, wind, and sand in the region along the Colorado River has left many interesting and fantastic figures shaped in sandstone.

The Colorado River is one of the most important water systems in the United States. Draining watersheds from seven western states, it is divided into two major districts, the Upper Basin comprised of Wyoming, Colorado, Utah, and New Mexico, and the Lower Basin formed by Nevada, Arizona, and California. With its headwaters in Wyoming and Colorado and its mouth (until recently) flowing into the Gulf of California, this river serves as a focal point for both prehistoric and historic events in the West.

The Colorado courses through Utah in a southwesterly direction and has two major tributaries, the Green and San Juan rivers, with smaller, additional sources flowing in from east and west. During prehistoric times it constituted a permeable boundary between the Anasazi populations to the south and east, and the Fremont and western Anasazi populations to the northwest and west, respectively. The Anasazi farmed tributary canyons and alluvial bottom lands where soil was rich and water adequate. These early Indians also created a system of trails that crossed both the San Juan and Colorado rivers. Spanish and Anglo-Americans later used some of these paths in their exploration and settlement of the West.

Historic Native American groups living along the Colorado include the 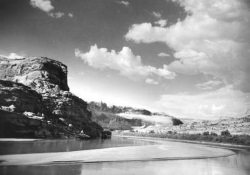 The geological make-up and the erosion by water, wind and sand in the region along the Colorado River has left many interesting and fantastic figures shaped in the sandstone. This is one of the unusual scenes to be enjoyed in a trip down the river. Bureau of Reclamation photo.

Paiute in southwestern Utah, the Ute in southeastern Utah, and the Navajo south and east of the confluence of the San Juan and the Colorado. This latter group has a rich body of lore concerning the river, which they say has a female spirit name “Life Without End.” She, and her male counterpart, the San Juan, form a protective boundary that skirts the reservation lands. In the past, Navajo ceremonies like the Blessingway provided protection for events and locations within this area, while beyond this line Enemyway and Evilway applied. Navajo raids across these rivers were a common occurrence during the 1850s and 1860s, and to a lesser extent in the 1870s.

The Spaniards provided the first documented information about the Colorado, giving the river various names, such as El Rio de Cosninas, de San Rafael, and de Tizon. Various Spanish parties visited the river, the most famous one in Utah being the Dominguez-Escalante expedition in 1776. As the two padres returned to Santa Fe, New Mexico, through southwestern Utah, they came upon an old Ute trail in an area that appeared otherwise impassable. Chiseling steps and smoothing a path for livestock, the missionaries forded the river at what was called the Crossing of the Fathers, which now rests under the waters of Lake Powell.

During the 1820s and 1830s, Euro-American mountain men ventured down and trapped parts of the Colorado. Famous personalities like Jedediah Smith, James Ohio Pattie, and Ewing Young searched for beaver along its banks, while another trapper, Denis Julien, left his inscription in Cataract Canyon.

Although these men explored sections of the river, it was not until 1869 and again in 1871-72, that the Colorado was fully mapped. John Wesley Powell’s two expeditions, sponsored by the Smithsonian Institute and Congress respectively, charted the water’s course from Green River, Wyoming, through the Grand Canyon and beyond. His ten- and eleven-man crews collected information and sailed their wooden boats down one of the most dramatic and roughest inland waterways in the United States.

Many people in Utah came to cross or visit the river but, with the exception of Moab where the water was calmer and the flood plain wide, few came to stay. For instance, the Mormons built the Hole-in-the-Rock trail in 1880, but once across, they moved on to the quieter San Juan. Charles Hall, a year later, placed into service a thirty-foot ferry boat to handle the traffic on the route between Bluff and Escalante; insufficient business caused Hall’s Crossing to close three years later. Even Hite City (1883), named after Cass Hite, a prominent prospector, was a boom-and-bust mining town on the Colorado that lasted only seven years. After the placer gold was removed from the gravel bars located at sites like Dandy’s Crossing and Ticaboo, the miners left their claims in search of better paydirt. Few were truly successful. Men with gold in their dreams again ventured forth in the 1890s. For about ten years, individual miners and companies with dredges tried to force riches out of the San Juan and Colorado rivers, but achieved little wealth. They, like the others, left.

The 1930s and 1940s saw the introduction of a more profitable trade on the Colorado–river running and tourism. Norman Nevills, for example, headquartered at Mexican Hat and turned the red waters of the San Juan and Colorado into green cash as recreation became increasingly important. Even with the introduction of the Glen Canyon Dam in the 1950s and Lake Powell in the 1960s, there was still plenty of white water and red rock for adventurous souls to find the isolation and excitement they desired. And later, when its tributaries were heavily committed to irrigation and culinary use, the Colorado remained a playground for kayakers, rafters, and tourists. Today, the Utah portion of the Colorado River continues to offer not only its water as a resource, but also its beauty and adventure to those who come to its banks.