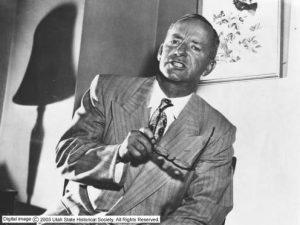 J. Bracken Lee, governor of Utah and Mayor of SLC

Joseph Bracken Lee was born on January 7, 1899, in Price, Utah, the son of Arthur James and Ida May Leiter Lee. He was the second of six children that included Flora Lee Nicholson, Arthur Lewis, Robert E., Alice Lee Rich, and Ruth Lee Fraser. Their father served as Price town president during 1904–5. In 1906 the family moved to Fruita, Colorado, where the father worked as a real estate speculator and banker and also served a term as mayor. In 1913 the family returned to Price where Lee entered high school and his father became an agent for the Gilsonite Company in the Uinta Basin. Lee’s mother, Ida May, a beautiful and resourceful woman, was known as one of the best cooks in Carbon County.

Lee’s family came from a Mormon background, but he professed no church affiliation. He was active in the Masonic Order, though, obtaining the thirty-second degree. Lee attended Carbon County High School but did not graduate because he chose to enlist in the army in April 1917, two months before graduation, to serve in World War I. Discharged on March 2, 1919, as a sergeant, he served in the Army Reserve as a second lieutenant until 1935. He entered the real estate business in 1921 and later established a successful insurance business.

He married Nellie Amelia Pace on September 20, 1920, and they had one child, Helen Virginia L. Nelson. His wife died on January 1, 1926, from Hodgkin’s disease. To pay the hospital bills accumulated during her illness, Lee rented out his home and lived in the garage, surviving on only a hamburger and a quart of milk a day. He paid off his bills in two years and vowed never to go into debt again. He married Margaret Ethel Draper on February 23, 1928, and they had three children: James Bracken, Margaret Jon L. Taylor, and Richard Lewis.

Lee started his political career in 1935 when he was elected mayor of Price. He served six two-year terms from January 1936 through December 1947. His accomplishments as mayor included putting the city hospital in the black, paving streets, and installing a new water system. Lee’s tenure as mayor was not without controversy, though, as he was accused of allowing liquor to be served openly and ignoring prostitution and gambling in the city.

In 1940 Lee attempted to gain the Republican nomination for governor but was defeated by Don B. Colton. He was an unsuccessful candidate for Congress in 1942 and governor in 1944. In 1948, however, his determination paid off and he was elected governor, defeating incumbent Herbert B. Maw, principally because of alleged mismanagement of the state’s liquor monopoly. He garnered 151,253 votes to Maw’s 123,814. When Lee ran for reelection in 1952, he defeated Salt Lake City mayor Early Glade by 180,516 votes to 147,188.

As governor, Lee almost immediately gained national attention because of his battle against the federal income tax and his ideas on economy and reform in state government. Although Utah had no bonded debt when he took office and indeed had a surplus of some nine million dollars, Lee nevertheless called for additional reserve funds and deep cuts in many state agency budgets. This insistence on strict economy won widespread approval at the outset of his term. His first message to the Legislature in 1949 made specific recommendations regarding the earmarking of funds, the reorganization of the welfare and highway departments, liquor management, conditions at the state prison, and public education. He established a state motor pool and abolished the state liquor enforcement agency and the Publicity and Industrial Development Department, viewing the latter as a Maw boondoggle. A Tourist and Publicity Council with a more restricted mandate was set up.

Although corporation franchise and motor fuel taxes were increased, Lee convinced the Legislature to lower individual income taxes. He also influenced the simplification of the state’s fiscal structure and maintained Utah’s debt-free status. He vetoed many bills and deleted numerous appropriations in agency budgets during his eight years in office.

Lee continued to be controversial while governor. He appeared to relish confrontations with individuals such as Milton B. Taylor, a member of the Finance Commission who refused to resign at Lee’s request, and E. Allen Bateman, state school superintendent, whose salary was raised by the school board despite Lee’s strongly worded objections. Over the years these feuds filled many pages in the newspapers and sometimes ended in court. His biggest battle, though, pitted him against educators. Lee’s often-stated low opinion of teachers and administrators made it difficult for him to deal with school financing. Moreover, his attacks on individuals and on the educational system itself clouded the issues and eventually allied the entire educational establishment against him.

In October 1955 Lee announced that he had deposited part of his anticipated federal income tax assessment in a trust account and would pay it only upon a court order. He apparently hoped to obtain a court test of the legality of certain congressional appropriations, such as foreign aid, but previous court rulings precluded that aim. Lee’s battle with the Internal Revenue Service continued for many years, and he became a hero to tax rebels throughout the country.

Lee decided to run for a third term in 1956, but by then he had lost the Republican Party’s support and was forced to run on an Independent ticket. He racked up 94,428 votes, a tribute to his enduring popularity, but that was only good enough for third place against winning Republican George D. Clyde with 127,164 votes and Democrat L. C. Romney’s 111,297.

In March 1957 Lee was appointed national chairman of For America, a group organized to fight super-internationalism and seek a return to “constitutional government.” He ran unsuccessfully for the U.S. Senate in 1958, again as an Independent. The following year he purchased the Utah Statesman (a Republican weekly newspaper) to promote his political views and changed its name to American Statesman. In 1959 Lee ran for and won the mayorship of Salt Lake City, a nonpartisan position. He served three terms—twelve years—as mayor, retiring from politics in 1972 at the age of seventy-three. 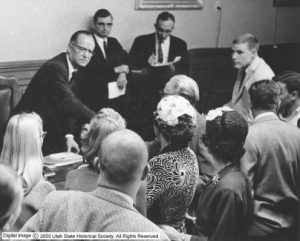 J. Bracken Lee, facing press and the public following his abrupt firing of Chief Cleon Skousen, served as Governor of Utah from 1949-1957. He also served as Mayor of Price and Mayor of Salt Lake City.

Controversy followed Lee into the mayor’s office. In March 1960 he fired Salt Lake City police chief W. Cleon Skousen, a man widely admired for his conservative views, professional law enforcement background, and tough stand on vice. The firing sent shock waves though the community, and once again Lee was thrust into the local and national limelight as accusations flew back and forth between the two men. While mayor he waged unsuccessful campaigns for the U.S. Senate in 1962, losing to Wallace F. Bennett in the GOP primary, and for governor in 1964, losing in the Republican convention to Mitchell Melich and D. James Cannon.

Lee was without doubt the most colorful and controversial governor that Utah has had. It remains arguable that his rigid economic measures saved tax dollars in the long run, as many building projects deferred during his administration required a greater outlay of state money later. Still, many endorsed his goal and admired him for expressing his views in a forthright manner. His ideas and philosophy of government attracted a large and loyal following, brought him national attention, and won for him a total of thirty-two years in elective office.