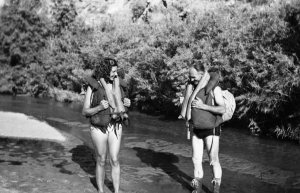 “Running” Utah’s rivers is an activity that dates back at least to John Wesley Powell’s well-documented explorations in the 19th century. The Powell parties used small wooden boats. Earlier explorers and trappers negotiated the dangerous white water of the Green and Colorado in “bull boats,” crude wooden frames with hides stretched across them. River running became a sport accessible to the general population in the 1950s and 1960s and has gained in popularity since then. One of the pioneers of commercial river running and a noted free spirit was Georgie White.

Georgie DeRoss was hardly born to the canyon country. She was raised in a cold-water Chicago tenement after her father abandoned the family. Later, she would write that her first cold-water swimming occurred in Lake Michigan, an experience that would serve her well in the years to come. Married to Harold Clark while still in high school, Georgie bore a daughter, Sommona Rose, at the age of 17. Georgie left the baby with her mother and traveled with Clark to New York City where she found office work at Radio City Music Hall. She was befriended by the members of a New York bicycle racing club who convinced her to go west. Reluctantly, Harold Clark accompanied his more adventurous wife as they bicycled across country in 1936. Along the way Georgie fell and broke her hand, but the couple could not afford a doctor. After the Clarks’ marriage broke up, Sommona Rose became her mother’s closest companion in daring adventures; the two climbed mountains and rock walls, ice skated, snow skied, and rode bikes until Sommona Rose was struck and killed by a car in 1944.

To ease her grief Georgie began to hike all over the Great Basin and canyon country of Utah and Arizona. Although she was married again briefly to James White, married life did not seem to suit her. “I fell in love with the river, married it, and I don’t plan no divorce,” she later stated. She explored much of the region with a kindred spirit, Harry Aleson, who would become a legendary river runner in his own right. Georgie first saw the Grand Canyon on a hike with Aleson in 1944. Aleson and White decided that since they could not afford a boat they would see if they could “swim” through part of the Colorado River country. Georgie described their gear: tennis shoes, a bathing suit, a light nylon shirt and jacket, and a kapok life preserver. Both also had a malt can packed with rations: pure sugar candy, powdered coffee, and dehydrated soup. This food may have seemed luxurious; Georgie was apparently in the habit of living for days on canned tomatoes. The two entered the river in June 1945 near Diamond Peak and were soon swept along by the powerful current. The strong flow and their near-hypothermic condition kept them from getting out of the river in most spots, although they did manage to reach some food Aleson had cached in Quartermaster Canyon. Eventually, they reached Lake Mead, having navigated roughly 60 miles of the lower Grand Canyon. Although the experience at the time was frightening, both found the story so entertaining to tell that they completed a longer “swim” the next summer. Georgie apparently wanted to do it a third time, but Aleson declined.

Instead, Aleson decided it was time for a boat. The end of World War II left many surplus small landing craft, and the two adventurers obtained a surplus ten-man neoprene raft. The boat proved nearly indestructible and ideal for running rapids. Georgie ran many trips alone, sometimes spending three weeks in the canyon, before she hit upon the idea of “sharing the expense.” In 1951 she began regular commercial raft trips with her River Rats company. By 1955 she was advertising trips down the San Juan, Glen, Cataract, and Grand canyons of the Colorado River, as well as trips on the Snake and Salmon. She developed what came to be known as the “G-Boat,” basically three rafts lashed together for safety and companionship. Georgie White’s River Rats became famous; she made movies of her trips, and Life magazine profiled a 1961 trip that included then-Interior Secretary Stewart Udall. Life called White “a new kind of iron-nerved mermaid”; her rituals included initiating customers into the Royal River Rat Society after a successful passage through Grand Canyon by breaking a raw egg over their heads.

The river-running lifestyle seemed to suit Georgie perfectly. Her trips continued until the late 1980s; the Los Angeles Times reported in 1984 on the “Grande Dame of the Grand Rapids” who, at age 73, navigated the G-Boat with the tiller in one hand and a beer in the other, wearing a full-length leopard-skin leotard (“to hide the engine grease stains”). Georgie was well known for supposedly consuming little but beer (and some vegetables) on trips. She would usually hire men as boatmen, apparently because she preferred their companionship, but women were sometimes hired as cooks. Although she slowed down with age, her roughhousing was legendary; once she nearly bit a boatman’s ear off during a play-fight. Georgie White’s last Grand Canyon trip came in the late 1980s, although she continued to run some shorter trips before her death in 1992.