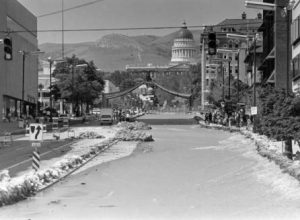 State Street in SLC during the floods of 1983

The 1981–82 water year had broken all records; then September 1982 climaxed with ten times more moisture than normal. A sense of foreboding grew valley-wide, as autumn mud slides closed Big and Little Cottonwood canyons and creeks flooded, damaging three hundred homes, roads, and bridges. At September’s end, Governor Matheson declared a state of emergency, but the federal government declined his appeal for aid.

The Jordan River brimmed due to an effort to reduce flooding in Utah Lake; now workers constructed levies and dikes. Murray officials improved their communications system to correct September’s inter-agency snarls. Meanwhile snow and rain continued to fall on earth that could absorb no more moisture.

April not only topped March’s moisture content but also added hurricane winds of up to one hundred miles per hour, causing millions of dollars in damage along the Wasatch Front. Next, cracks appeared in the earth, slumping ground near the Capitol and closing two roads. Below the Emigration Oaks Condominiums overlooking the valley, the hillside slipped, taking out a sewer line and allowing waste to seep into Emigration Creek.

Salt Lakers’ attention was then diverted by a huge slide to the south that drowned the town of Thistle in the Spanish Fork River and by devastating mud slides to the north in Farmington and Bountiful. The entire state felt the effects of the deluge, humorously summed up by the governor in his much-quoted statement, “This is a hell of a way to run a desert.”

Perhaps the height of optimism—or a popularized clinical term, “denial”—became apparent when Saltair III opened on the south shore of the Great Salt Lake. Partners Wallace A. Wright, who developed Trolley Square, Jim Sands, and John Silver and Stewart Grow, who already operated concessions, had announced the project two years earlier. Wright showed the creativity that made Trolley Square Mall famous when he found an old aircraft hangar at Hill Air Force Base, had it dismantled, then reconstructed on the Saltair site.

The new dance floor gleamed eight feet above the lake—more than four thousand feet above sea level. The last time the lake had risen higher, Rutherford B. Hayes had been in the White House. Yet no sooner did construction begin than the lake began its climb. At first the partners coped, replacing their dune buggy concession with a sailboat concession. But a year after the grand opening, only salty waves danced on the hardwood floor of the new resort, and the Moorish towers stood vacant and desolate.

May had proven climactic overall. Rain and snow dispelled signs of spring until the month’s end when temperatures soared into the 80s. Then canyon snowdrifts melted furiously into swollen streams and sodden ground. On 26 May, Thirteenth South Street was transformed by officials into a river flowing from Sixth West Street to the Jordan River. Trucks dumped eight loads of earth per hour into dikes, bolstered by sandbags and plastic. Soon blocks eastward were also encompassed, passing West Temple, and reaching Liberty Park in an effort to contain the flow from Red Butte, Emigration, and Parleys creeks. A second river appeared on Ninth South Street, but would not remain long.

Over the Memorial Day weekend, temperatures rose into the 90s. Children and teenagers splashed in the swollen creeks, ponds, and even the new river made treacherous by invisible manholes; sightseers stopped along Interstate 15 to spy the valley’s new waterway, and volunteers continued slinging sandbags. Police with bullhorns chased the curious and the adventurous away from the Thirteenth South river. In fact, their flat-bottomed boat, equipped with a spotlight, and their ultra-light aircraft became known in city council meetings as the police chief’s army and navy.

Then City Creek, notorious along North Temple in pioneer days, raised a ruckus. Leaping its usually quiet banks in Memory Grove, it sprinted into town and splashed against the LDS Church Office Building on North Temple Street then rushed Temple Square. Those buildings and the Salt Palace were quickly sandbagged even as waves lapped at the Eagle Gate apartments on South Temple Street and circled the Brigham Young monument where South Temple intersected with Main.

That weekend volunteerism captured the media’s attention almost as strongly as the flooding. The American Red Cross, the Salvation Army, and the Job Corps all proved valuable; key, however, was the tightly knit LDS organization that had hailed 14,000 women to a feminist conclave and organized thousands of anti-ERA lobbyists. Now that power to mobilize became not only visible but providential under the direction of general authority Robert E. Wells and in cooperation with city and county officials.

On Sunday even Mayor Wilson slung sandbags as the State Street River was born to prevent millions of dollars in property damage to the downtown business district. Several thousand volunteers threw up a dirt and sandbag wall from Memory Grove to Fourth South Street as City Creek once again raged toward the city. North Temple Street overflowed when its crucial conduit became jammed with debris, an obstruction that would prove almost impossible to blast or drill loose.

During the next week, the State Street River moved south, threatening to meet the Thirteenth South river and effectively bisect the city; however, it was finally contained at Eighth South Street. Meanwhile wooden bridges for both pedestrians and vehicles allowed traffic across the river and linked downtown to the interstate. For weeks the brown waters sped through the city, ignoring the semaphores that turned red and green above them. Restaurants and shops exploited the novelty, as a stroll along the river became de rigueur during the lunch hour or after work.

Meanwhile flooding outside the business district demanded attention. Parleys Creek surged around the Granite Tabernacle on Ninth East Street near Twenty-first South, placing one home on an island. Three hundred residents were temporarily displaced from the Cottonwood Cove mobile home park as Big Cottonwood Creek brimmed its protective dikes. The sandbags removed from downtown Salt Lake City quickly banked the Jordan River, the Surplus Canal along Twenty-first South Street, Big and Little Cottonwood creeks, and Mill Creek, all of which peaked later than City Creek. Tragically, two flood-related fatalities were reported in the county, one an electrocution, and the other a drowning in Little Cottonwood Creek. By June’s end, only mud, memories, repairs, and photographs witnessed Salt Lake County’s trial by weather, and its triumph through cooperation.