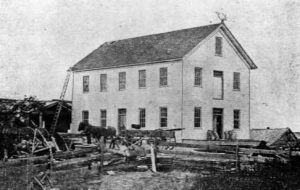 The first mining laws formulated for Utah were established in this building. General Patrick E. Connor and Bishop Archibald Gardner were present at the 1863 meeting. Photo was made in 1880. Digital Image © 2008 Utah State Historical Society.

In the past two decades Salt Lake Valley’s West Side has come into its own, with booming population and economic growth. Yet few people know moving “over Jordan” is a valley tradition that began with “Archie” Gardner and his gristmill.

Canadians Archibald and Margaret Livingston Gardner were not the first couple to cross the Jordan River and settle along Bingham Creek. But their arrival changed the future of “West Jordan,” which then comprised everything west of the Jordan River, ranging from Point of the Mountain to the Great Salt Lake.

Archie had built his first flour mill at age 17 plus two other mills in Canada before joining the Mormons. Arriving in Utah in 1847, he quickly obtained rights to Warm Springs and attempted to install a mill there. The water volume proved insufficient, so he moved his machinery to Mill Creek and later claimed to have sawed the first lumber in the new Mormon community.

But Mill Creek “dried up” (according to his brother Robert), so in 1849 the Gardner brothers dismantled the mill and carried it across the Jordan River to Bingham Creek, where four or five families had already “moved over” and were attempting to farm despite the Oquirrh Range’s shortage of year-round water courses.

The Gardners and their crew immediately set to digging a 2.5-mile millrace for their planned sawmill and gristmill. The channel would be enlarged time and again as an important irrigation canal. They had to construct a low dam at approximately 90th South to raise the river to a level that would feed the canal. The millrace alone cost $5,000, and they financed the entire enterprise themselves.

The Gardners built well. Many years later a grandson helped to tear down one of these pioneer mills with grandfather Archie looking on. The young laborers quickly learned that early-type mills were built not with nails but with mortises and pins that tightened under use until there was “hardly a quiver when running.” The demolition crew was stymied until Archie, smiling broadly, instructed them to “start at the key corner where the last brace…was located.” Wrote the grandson, “When that was found, all was easy.”

As for Archibald and Robert Gardner, their families grew along with their modest business empire. Archie would eventually boast 11 wives and 48 children and build a total of 35 mills in his lifetime. A descendant wrote that Archie’s “real pleasure” was to construct the mills, turning them over to others to operate. On occasion he would almost give a mill away so as to raise capital for yet another. For a time Archie sought to make Spanish Fork his primary home, but this ambition ended when Brigham Young called him to be bishop of the West Jordan Ward. Archie served as Jordan’s chief church and civic leader for more than three decades.

Poor brother Robert, on the other hand, learned that “settling down to any kind of labor in a ‘Mormon’ life was very uncertain.” He was just beginning to enjoy the fruits of the Jordan mill when he was called on a mission to Canada. He returned, rebuilt the Mill Creek mill, and was once again becoming a man of substance when he was asked to colonize Utah’s Dixie. He never thought to reject a church calling. Apparently his frontier experience had taught him, with many other Utahns of his generation, to subordinate individual ambition to the community welfare.