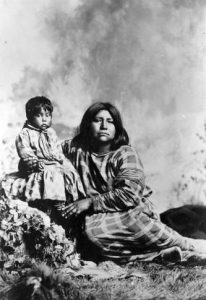 The Goshute Indians are part of the larger Shoshonean-speaking Native American groups that live in the Intermountain West. Although no one knows how long the Goshutes had occupied the area where they lived when first contacted by Europeans, a date of 1,000 years ago is most probable as the time when Shoshonean speakers entered the Great Basin from the Death Valley region of California.

At the time the Mormons arrived in Salt Lake Valley, the Goshute Indians lived in the desert regions to the southwest of the Great Salt Lake. Although exact boundaries are hard to determine because of the nature of the land and the proximity of other peoples, the Goshutes lived in the area between the Oquirrh Mountains on the east and the Steptoe Mountains in eastern Nevada, and from the south end of the Great Salt Lake to an area almost parallel with the south end of Utah Lake. This area is located entirely within the Great Basin, which is an area with some of the most arid conditions on the continent, as well as one of the most varied regions in terms of climate, topography, flora, and fauna.

Like the other related Shoshonean groups and Paiute peoples who lived in the Great Basin, the Goshutes had an effective understanding of growing cycles, variations in climate, and animal distribution patterns. They lived in the most desolate part of what is now the western portion of Utah and eastern portion of Nevada, and because of this their culture has long been recognized as the simplest of any to be found in the Great Basin. In aboriginal times they lived at a minimum subsistence level with no economic surplus on which a more elaborate sociopolitical structure could be built.

The Goshutes exemplify the historic Great Basin desert way of life perhaps better than does any other group because of the nature of their territory. Organized primarily in nuclear families, the Goshutes hunted and gathered in family groups and would often cooperate with other family groups that usually made up a village. Hunting of large game was usually done by men; women and children gathered plants, seeds, and insects. A hunter shared large game with other members of the village, but the family was able to provide for most of its needs without assistance.

The harsh desert conditions and paucity of material and cultural wealth helped to isolate the Goshutes from the white onslaught until a fairly late date. Spanish and later Mexican slavers may have entered the Goshute domain in search of captives, but it was not until 1826 that white incursion into the Goshute homeland was first documented. The journal of Jedediah Smith gives the first written description of the Goshute domain, made while Smith and two companions were on their return trip from California to Bear Lake. For the next two decades white contact with the Goshutes remained sporadic and insignificant. Only after the arrival of the Mormons in 1847 did the Goshutes come into continual and prolonged contact with whites.

After the Mormons, a myriad of emigrants, settlers, and government agents came to the Goshutes’ land. The Pony Express, the Overland Stage, and the transcontinental telegraph all ran through Goshute country bringing many white people into the land and contributing to the Indians’ problems of survival. The Mormons established communities at Tooele, Grantsville, and Ibapah–all important Goshute sites. The military established Camp Floyd (Fairfield), while the Pony Express and Overland Stage set up stations along a line between Fairfield, Simpson Springs, Fish Springs, and Deep Creek. Ranchers and farmers moved into the region, taking the best lands available with water and forage.

In the fragile environment of the desert, domestic livestock represented an important source of competition to the Goshutes. They had never raised horses because the animals would eat the grass which they relied upon for seeds and fiber. Water, always in short supply, was denied to the Goshutes by farmers, ranchers, and Overland Stage stations. The Goshutes responded to this threat in the only way they knew how, by attacking the stations and farms and killing the inhabitants and livestock. Mormons had moved into the Tooele Valley by 1855 and were wintering stock in Rush Valley. Goshutes began to kill their livestock and threaten settlers, in a vain attempt to force the whites off of their homelands. Local militias, and later the United States Army, attacked the Goshutes, killing many and forcing the survivors to sign a treaty in 1863. The treaty was not one of land cession, nor did the Goshutes give up their sovereignty. They did, however, agree to end all hostile actions against the whites and to allow several routes of travel to pass through their country. The Goshutes also agreed to the construction of military posts and station houses wherever necessary. Stage lines, telegraph lines, and railways could be built throughout their domain; mines, mills, and ranches would be permitted and timber could be cut. The federal government agreed to pay the Goshutes $1,000.00 a year for twenty years as compensation for the destruction of their game. The treaty was signed on 13 October 1863. Signing for the Goshutes were Tabby, Adaseim, Tintsa-pa-gin, and Harry-nup, while James Duane Doty, Indian Commissioner, and Brigadier-General Patrick E. Connor signed for the United States. The treaty was ratified in 1864 and announced by President Lincoln on 17 January 1865.

By 1869 the majority of Goshutes had abandoned many of their traditional ways and had settled on farms at Deep Creek and Skull Valley. Hunting and gathering were still important to the Indians subsistence, but their traditional lifestyle had ended. Attempts were made to relocate the Goshutes to other Indian reservations, including the Ute reservation in the Uinta Basin. All attempts to remove the Goshutes failed, and the government cut off the annuities promised in the treaty of 1863.

The remaining decades of the nineteenth century proved tumultuous for the Goshutes. Whites moved into their homeland in even greater numbers and the federal government reneged on its treaty obligations. Finally, in the first decades of the twentieth century, the federal government established two reservations for the Goshutes. The larger of the two is on the Utah-Nevada border at the base of the Deep Creek Mountains, while the smaller reservation is located in Skull Valley. Today, the Goshutes live on these reservations and in the surrounding communities, small in numbers and still relatively isolated from their white neighbors.