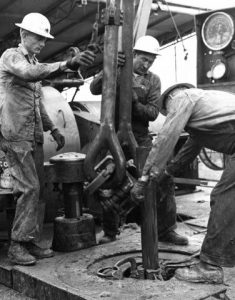 Despite technological advances, drilling for oil remains hard work and is considered a hazardous occupation.

Utah’s oil industry developed slowly in two distinct phases: a long period of exploration and a more recent time of commercial production. The exploratory period began in 1850 when Capt. Howard Stansbury, while on a survey of the Great Salt Lake for the Army Corps of Topographical Engineers, discovered evidence of “petroliem” along the northern shore of the lake. During the next forty years Utah residents and visitors found other signs of oil in various parts of the region.

Before 1890, gold prospectors traveling down the San Juan River in southeastern Utah noticed oil seeps along the river’s steep embankments. In that same period two Salt Lake City businessmen found oil dripping from the crevices of rocks on the Green River, and ranchers and other residents of the Uinta Basin came across similar occurrences near Vernal. In 1891 the Utah Oil Company, whose incorporators included Simon Bamberger—later to be governor of Utah—and C. J. Millis, sank a shallow well near Green River, Utah. Not finding any oil, the Utah Oil Company abandoned its well after drilling to a depth of 1,000 feet. During the remainder of the 1890s oil and gas prospectors sank approximately twenty-five wells in various parts of the state. 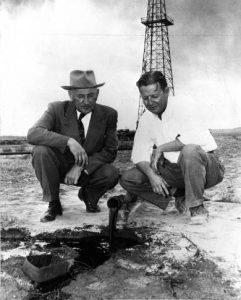 In 1901 Anthony Lucas’s fabulous petroleum discovery at Spindletop, Texas, encouraged Utahns to renew their interest in the state’s oil potential. A somewhat frenzied increase in the formation of petroleum companies and the leasing of promising oil properties followed, and the Salt Lake Tribune proclaimed in December 1901 that an “oil era” was at hand for Utah. Two years later the state coal mine inspector supported the Tribune’s claim by noting the existence of thirty-five oil companies in Utah and the drilling of two wells.

Southern Utah became the focal point of oil field activities in 1907. Early that year Pat Holohan, a Nevada miner, found outcroppings of oil sand near Virgin City in Washington County and quickly drilled two wells. Twelve different companies soon put down fourteen wells in the region. Meanwhile, a former gold prospector named E. L. Goodridge was drilling a well at Mexican Hat on the San Juan River in San Juan County. In March 1908 Goodridge produced a gusher, and by the end of 1909 approximately seven oil companies had started work on no less than twenty-five wells near Mexican Hat. Neither Virgin City nor Mexican Hat ever became major oil-producing fields, but both areas produced enough oil to supply small local refineries that operated intermittently for many years.

Oil men drilled more than eighty wells in Utah from 1907 through 1912. In addition, John C. Howard incorporated the Utah Oil Refining Company and completed the construction of a refinery at the northern edge of Salt Lake City in 1909. After 1912, however, the state’s oil industry went into a slump from which it did not totally recover until 1922. 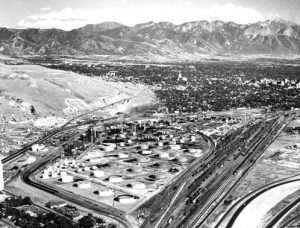 Oil refining operations in the north end of Salt Lake City began in 1909. This photograph was taken in the 1960s.

The prospect of a major petroleum find nevertheless continued to lure a few explorers, and from 1916 to 1921 several companies, including such major operators as the Ohio Oil Company and the Midwest Refining Company, drilled a dozen deep test holes. Observing the persistence of these enterprises, one writer concluded in 1925 that their efforts were justified because Utah’s structural and surface conditions held “exceptional promise for oil and gas accumulation.”

During the 1920s petroleum companies increased their exploration efforts throughout Utah. They worked over areas previously examined and also initiated drilling projects in new locations such as Salt Lake City itself, where one company drilled a well at the north end of Redwood Road while a second firm sunk a well on Highland Drive. Enterprising petroleum operators also tested the Great Salt Lake to a greater extent than had been previously done. The Lakeside Oil Company drilled on the western shore of the lake, and an offshore rig was built on a pier near Rozel Point at the lake’s northern tip.

One of the most spectacular ventures of the period was a joint project on the Colorado River near Moab, Utah. The companies involved in this endeavor included the Utah-Southern Oil Company, the Midwest Enterprises Company, and John Howard’s Utah Oil Refining Company. Together, these three firms drilled a well called the Frank Shafer No. 1, which hit oil on December 8, 1935. At first the well gushed oil, gas, rock, and sand and gravel hundreds of feet into the air, but very quickly the 84-foot tall wooden derrick caught fire and burned. When the well hit oil the Salt Lake Mining Review hailed it as evidence that Utah had joined the ranks of the “real petroleum producing states.” The boast was premature, however, because the well’s promoters were unable to produce any oil from the venture despite extending the well to a depth of 5,000 feet.

Oil in the Uinta Basin

During the 1920s Earl Douglas, a paleontologist who discovered Dinosaur National Monument, became an eloquent spokesman for Utah’s oil industry. His interest in petroleum geology and his scientific investigations in the Uinta Basin convinced him that the region contained a great deal of oil. Throughout the 1920s he called attention to the Uinta Basin by writing journal articles and letters and by visiting financial centers to seek support for drilling projects.

The Great Depression and the first years of World War II dampened enthusiasm for Utah’s petroleum potential. Experiencing the worst slowdown in drilling since the World War I period, Utah oil promoters drilled only 143 wells from 1930 through 1944. In 1939 only three wells were sunk, while the total dropped to two in 1942, and no one ventured into any areas which had not already been explored before the Great Depression.

The industry survived this slowdown, and developers continued to drill in Washington County’s Virgin oil field where they completed sixty wells before 1944. Standard Oil of California sank two test holes in Emery County, and the Utah-Southern Oil Company remained active in Grand County, even drilling one well to a depth of 6,715 feet. William E. Nevills, who began work in the Mexican Hat oil field in the mid-1920s, enlarged his operations by adding three wells to his string of small producers during the 1930s.

Toward the end of World War II oilmen began to accelerate Utah’s petroleum operations once again. From 1945 through 1947 they succeeded in finishing the groundwork necessary to propel the state into a period of commercial oil production. The focal point of their activities was the Uinta Basin where a number of large companies such as Standard Oil of California, Pure, Continental, Gulf, Carter, and Union began to explore more seriously than ever before. Despite the presence of these major firms, the Equity Oil Company, a Utah-based enterprise under the leadership of J. L. Dougan, was the first to find commercial amounts of oil in the Uinta Basin. Dougan was drilling in Ashley Valley on September 18, 1948, when his company tapped a pool of oil that produced 300 barrels a day. During the next seven years major oil companies opened several Uinta Basin fields such as Roosevelt (1949), Red Wash (1951), Walker Hollow (1953), and Bluebell (1955). These fields became a part of two giant oil-producing complexes–Greater Altamont/Bluebell and Greater Red Wash–which ultimately included White River (1961), Cedar Rim (1969), and Altamont (1970). 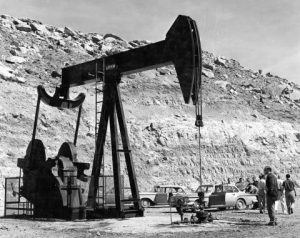 During the 1950s other large companies, including Shell, Superior, and Texas, tapped into an oil region in southeastern Utah that overshadowed even the Uinta Basin. The discovery well at Aneth, along the San Juan River east of the old Mexican Hat field, produced 1,704 barrels of oil a day after it hit oil in 1956. Twenty other wells were completed that year, each averaging a daily flow of 800 barrels. The major companies operating in the Aneth region soon discovered other fields, including Ratherford (1956), McElmo Creek (1957), and White Mesa (1957), and together these fields became known as the Greater Aneth Area.

From the late 1940s until 1957 almost all of Utah’s oil development occurred along the eastern border of the state from the Uinta Basin to the San Juan River. The one exception was the Upper Valley oil field located ten miles southeast of Escalante in Garfield County. In 1964 Tenneco opened the Upper Valley field, and by 1978 there were twenty-six active wells capable of producing a total of one million barrels of petroleum a year.

In 1975 Summit County became an important center for oil development. Part of the Overthrust Belt—a region of highly complex mountain-forming faults, folds, and thrusts—Summit County became the scene of American Quasar’s discovery of a field called Pineview, east of Coalville. Within the next five years, Amoco, Chevron, Gulf, Chaplin, and Anschutz Corporation hit prolific amounts of oil and gas in a series of fields that included Lodgepole, Elkhorn Ridge, Anschutz Ranch, and Anschutz Ranch East.

From Howard Stansbury’s discovery of “petroliem” along the northern shore of the Great Salt Lake in 1851 to the opening of the giant Overthrust Belt fields in Summit County in the late 1970s, the history of Utah’s oil industry has been one of slow and intermittent development. The first companies to drill within the state were predominantly small and poorly financed. The majority of wells they drilled (360 out of a total of 550 drilled prior to the Ashley Valley well of 1948) did not even reach a depth of 1,000 feet. None produced the 300 barrels of oil a day that Equity’s first well initially yielded. Only gradually did the large petroleum companies enter Utah, and they did not succeed in discovering commercial quantities of oil until after 1948. Most oil development has occurred in the eastern third of Utah, running from the Uinta Mountains to the San Juan River.

In the 140 years since Stansbury’s first discovery nearly one hundred and sixty fields have been explored and approximately 900,000,000 barrels of oil produced in Utah (Texas yielded almost that much petroleum in 1947). The number of productive wells in Utah has increased from 225 in 1957 to 875 in 1968 and 1,300 in 1978. While the state’s contribution has remained relatively minor, the petroleum industry has become one of Utah’s significant commercial enterprises.