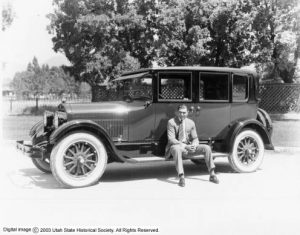 During the 1920s Americans celebrated their material prosperity and made national heroes out of sports figures. The greatest American sports hero was undoubtedly Babe Ruth; his closest rival was a tough heavyweight boxer from the mining West called Jack Dempsey.

Dempsey’s family originally came from Logan County, West Virginia. Jack claimed that his family was related to the Hatfields of feud fame. An LDS missionary converted his parents, Hyrum and Celia Smoot Dempsey, and they moved West, arriving in the Mormon village of Manassa, Colorado, around 1880. While Hyrum fell away from the church, Celia remained faithful. (Jack would later write, “I’m proud to be a Mormon. And ashamed to be the Jack Mormon that I am.”) The future boxing great, William Harrison Dempsey (named after the president), was born in Manassa on June 24, 1895. His father and older brothers were miners, and the family moved many times as they followed mining jobs around Colorado and Utah. Harry, as the youngster was known, began working on a farm near Steamboat Springs at the age of eight. Over the course of the next several years, he would work as a miner, cowboy, and odd-job man. The future heavyweight champ always claimed that he loved fighting, mining, and cowboying and could have been happy doing any of the above for the rest of his life.

Harry’s older brother, Bernie, who often earned extra money as a prize fighter in the tough Rocky Mountain mining towns, taught Harry the rudiments of the sport. Bernie convinced Harry to chew rubbery pine tar gum to strengthen his jaw and to soak his face in brine to toughen the skin and prevent cuts. From age eleven Harry was in training to be a prize fighter.

The Dempsey family finally settled in Provo when Harry was twelve, and he attended Lakeview Elementary School before dropping out of the eighth grade. He worked shining shoes, picking crops, and unloading beets at a sugar refinery for ten cents a ton. Then from 1911 to 1916 he “rode the rods”—hung below railroad freight cars—from town to town across Utah, Colorado, and Nevada, picking up fights where he could. Peter Jackson’s saloon on Commercial Street in Salt Lake City served as his home base. Hardy Downey, a local promoter, got Harry a number of fights. In his Salt Lake City debut, fighting as Kid Blackie, he knocked out One-Punch Hancock with one punch. Downey was so displeased that he made Dempsey fight Hancock’s brother before he would pay him.

Bernie Dempsey was traveling a similar circuit in Colorado, billing himself as Jack Dempsey after a great middleweight of the late nineteenth century. In 1914 Harry substituted for the ill Bernie in a match and for the first time became Jack Dempsey himself. Jack later estimated that he fought 100 fights in those years, winning most, losing some, and earning very little. He often survived on the free saloon lunch that came with the purchase of a nickel beer.

Jack finally got a break when his manager got him some quality fights in San Francisco and the East. On July 4, 1919, Jack met that much larger champion, Jess Willard, in Toledo, Ohio. The Salt Lake Telegram had a direct wire to Toledo, and the sports editor in Salt Lake City read the blow-by-blow results aloud to a crowd of 5,000 in Jack’s adopted home. Dempsey knocked Willard out and went on to rule the heavyweight division until two famous losses to Gene Tunney forced his retirement. Dempsey remained an enormously popular figure for the rest of his long life, starring in movies (generally awful) and operating a string of restaurants. He often returned to Utah where he bought his mother several homes.

Sources: Dempsey: By the Man Himself, as told to Bob Considine and Bill Slocum. Dempsey, by Jack Dempsey with Barbara Piatelli Dempsey. Ogden Standard Examiner.