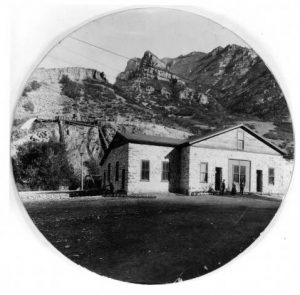 In the early 1900s an engineer and contractor by the name of Lucien L. Nunn was a major figure in bringing electric power to the Intermountain West. He is best remembered for the Ames power plant near Telluride, Colorado, and the Olmsted hydroelectric plant in Provo Canyon, Utah. But he also entrepreneured many smaller plants, some of them in Utah. His expertise was high-head hydroelectric technology for relatively small mountain streams.

At the turn of the century Beaver County, first settled in the 1850s, was a busy mining and wool manufacturing center. By 1880 it enjoyed rail service with the Utah Southern Railroad extension to Milford and a branch line to the silver mines. But Beaver lacked hydroelectric power. The Newhouse Mines & Smelters Company was using an unreliable steam system fired by coal and wood to generate its electricity.

Nunn was attracted by the area’s industrial activity. Newhouse Smelter by itself, he knew, was large enough to justify a small power plant. Nunn sent his survey crews into the Tushar Mountains looking for a potential power plant site. They found it in steep Beaver Canyon, twelve miles east of Beaver City. Here several streams flowed into the Beaver River at sufficient grade and supply to run several good-sized generators. Nunn promptly organized the Beaver River Power Company with himself as president. His engineers began measuring seasonal water flows as he drew up plans.

In 1905 work began on the dam with A. B. Blainey superintending. Also 2.25 miles of wooden pipeline was laid from the reservoir to a riveted steel penstock (sluice or trough that guides water to the wheels).

In 1907 the company built the powerhouse itself. This was followed by an adjoining complex of offices, residences, boarding house, and shops for the self-sufficient company post. Nunn hired W. H. Lepper, an up-and-coming Salt Lake city architect, to design the complex. Lepper wisely took advantage of a nearby quarry of tuff (or tufa), a pink stone that was relatively easy to cut and square. It had been used in scores of Beaver buildings since the 1880s. The power plant structures, in the Craftsman architectural style, were simple but functional with their shingled upper walls and roofs.

The powerhouse had a sunken floor area for transformers and switches and an area with concrete platforms for two turbine-generators that had a total capacity of 2 megawatts.

In April 1908 the plant started up. A 40,000-volt line transmitted electricity to the New house Mines’ Cactus Mill 53 miles away. From there, substation transformers took power to Consolidated Mining Company’s Indian Queen operation. A second substation carried power to the city of Milford. Over the next few years other customers signed on, including the towns of Minersville and Marysvale. Nunn had masterfully engineered both the mechanical and commercial aspects of this enterprise.

In 1910 smaller diversion dams were built on three streams feeding into the Beaver River. Feeder lines were laid from these dams to the main conduit. These improvements were costly, but they paid off in increased capacity. Also in 1910, having problems with water regulation, Nunn’s engineers installed a surge tank at the top of the penstock. When one considers Nunn’s many other operations, the care and attention his outfit gave the Beaver Power Plant is evidence of a well-managed, efficient organization.

Almost from the beginning Nunn used the Beaver plant as a second campus for his Telluride and Deep Creek educational foundations. Each summer apprentice engineers and students stayed in the plant’s boarding house with attached classroom while getting on-the-job experience. Nunn thus helped train a generation of western civil engineers.

In 1917 Nunn merged the Beaver River operation with his Telluride Power Company, increasing Beaver’s service area to include parts of Piute, Sevier, and Sanpete counties. In 1918 he built the Lower Beaver Power Station three miles downriver specifically to serve the Milford mining operations.

Nunn died in 1929. His interest in Telluride was left to the trustees of his foundations. Dynamic management of the Beaver plant continued, with upgrades to the operation and improvements on the dam and conduit system. By 1938 all original pipes had been replaced by new welded steel. The wood staves were recycled into barns, sheds, and a blacksmith shop.

Eventually the plant was acquired by Utah Power and Light. Still in operation, the plant and grounds have been named a historic site.