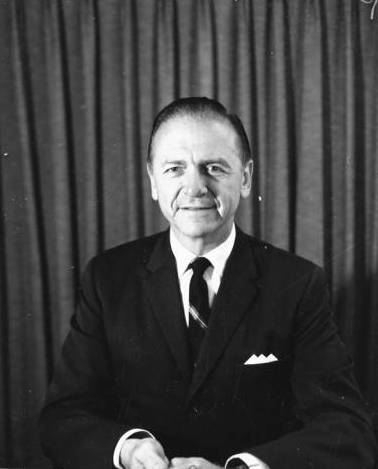 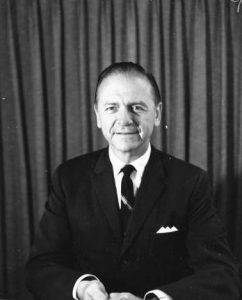 A moderate Democrat, though personally more liberal than his constituents, Frank E. “Ted” Moss was a three-term U.S. Senator who served from 1959 to 1977. He was born in Holladay, a suburb of Salt Lake City, on 23 September 1911, the youngest of seven children of James E. Moss, a well-known secondary-school educator, and Maude Nixon Moss. He graduated from Salt Lake City’s Granite High School in 1929, from the University of Utah in 1933, and from George Washington University Law School in 1937. On 20 June 1934 he married Phyllis Hart, and the couple had four children.

After receiving his law degree Moss worked for two years on the legal staff of the Securities and Exchange Commission. He returned to Utah in 1939 and became a law clerk to Utah Supreme Court Justice James H. Wolfe. In 1940 he was elected a judge in Salt Lake City’s Municipal Court. During World War II he was on the Judge Advocate General’s staff of the U.S. Army Air Corps in England. Following the war he returned to Salt Lake and was reelected a city judge. He was elected Salt Lake County Attorney in 1950 and was reelected in 1954.

In 1956 Moss ran unsuccessfully for the Democratic nomination for governor. Two years later he ran for the U.S. Senate against two-term incumbent Arthur V. Watkins, who was a close ally of both the Eisenhower administration and the Mormon church, and also against J. Bracken Lee, a non-Mormon and former two-term Utah governor (1949-57), who was running as an independent after losing to Watkins in the Republican primary. The Republican vote was split in the general election and Moss was elected with less than 40 percent of the vote.

Moss was elected to a second term in 1964, soundly defeating with 57 percent of the vote Brigham Young University President Ernest L. Wilkinson, a conservative Republican, in a bitter campaign. He was elected to a third term in 1970 when he won 56 percent of the vote against four-term congressman Lawrence Burton. The campaign was close until the final weeks, when a series of attempts by Burton misfired which had tried to paint Moss as an unpatriotic, closet liberal who supported reduced penalties for drug use and riots on college campuses.

In the early years of his Senate career, Moss followed the tradition of sitting in the back row and keeping quiet. As he gained seniority, however, he became increasingly visible and eventually gained a measure of national prominence, in particular with regard to environmental, consumer, and health care issues. He became an expert on water issues and wrote a book on the subject, The Water Crisis (1967); worked to secure additional national parks for Utah; and initiated important investigations into the care of the elderly in nursing and retirement homes, and into physicians’ abuses of the federal Medicaid program.

His work as chair of the Consumer Subcommittee of the Senate Commerce Committee probably brought him the most national attention. He sponsored a measure that required improved labeling on cigarette packages about the health hazards of smoking and banned cigarette advertising on radio and television; he also sponsored the Consumer Product Warranty and Guarantee Act, the Toy Safety Act, the Product Safety Act, and the Poison Prevention Packaging Act. Following his loss in 1976 to Orrin Hatch, a conservative lawyer who had the support of Ronald Reagan, he returned to private life and the practice of law in Washington, D.C., and Salt Lake City.