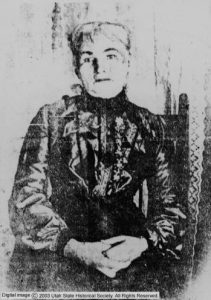 Mary Jones was the notorious “Mother Jones,” a leader in the labor movement, who came to Carbon County during the 1903-04 coal miner’s strike.

Wherever American workers struggled to improve their conditions of labor in the late 19th and early 20th centuries, Mary Harris Jones was likely to be there. A tireless champion of workers’ rights, Mother Jones, as she was called, was involved in the great railroad strike of 1877, the Haymarket riot of 1896, and the steel strike of 1919. In April 1904 she came to Carbon County, Utah, to assist coal miners in their strike against the Utah Fuel Company.

The Castle Gate coal mine employed so many Italian immigrants that it was known as the “Italian mine.” The miners went out on strike in 1903, seeking better wages and hours and recognition of the United Mine Workers union. Mother Jones came to Utah at the behest of the UMW immediately after she was ordered out of the striking mining districts of Colorado by the governor.

Already well-known when she arrived in Helper, Mother Jones quickly garnered attention when she promised to “agitate, educate and aggravate” on behalf of the miners. She told reporters that “…Mormonism is about as good as any of the rest of the religions, as all the churches and preachers are in league with the big thieves and join hands with corporations in oppressing the poor laboring man.” The Deseret News sought to discredit her, claiming that she had been a Denver brothel keeper and “an erstwhile fast friend of Kate Flint, one of the pioneer scarlet women of Salt Lake.”

Both fearless and compassionate, she endeared herself to ordinary working men and women with her forthright manner and lack of pretension. When, for example, after serving Jones her dinner at a Helper hotel the waitress brought a finger bowl to the table, the labor advocate, speaking so everyone in the dining room could hear, said: “Take it away my girl….such things are not for me, they only give some poor overworked girl extra work at washing dishes.” The story quickly spread throughout the town.

Jones, called by the press a “well-preserved woman of about 60 years of age” (actually 74), soon met with labor organizer William Price, who was confined with reportedly the worst case of smallpox that the local health officer, Dr. Holmquist, had ever seen. The doctor quarantined Jones, and she was forbidden to address strikers at an open-air meeting in Helper. The quarantine shack was burned down, however (apparently by strikers), forcing her to seek shelter at a lodging house. She later claimed that a company detective tried to rob her there at gunpoint, mistakenly believing that she was the guardian of the strike fund.

Mother Jones broke quarantine a number of times in the next few days, once addressing evicted miners in their tent colony. The local papers reported that she was about to lead a force of strikers–with women and children at its head and backed up by at least 150 armed men–who planned to march on Castle Gate and retake their company housing. The Deseret News claimed that “Castle Gate Italians, until goaded by this Amazon, had kept themselves within the law and very few arrests were made….[Jones] has become a ranting vixen seeking to lead a mob of destructionists into the execution of some diabolical plot….” Alarmed local citizens called for the state militia, but Sheriff Hyrum Wilcox formed a posse instead and arrested about 120 miners. The mass arrests broke the strike, which ended shortly thereafter.

Mother Jones later wrote that she had been held captive under the pretext of quarantine for 26 days, although research indicates it was probably less. She left Carbon County for Salt Lake City near the end of April and then continued west to San Francisco, where more strikers awaited her encouragement. Viewed as a compassionate Joan of Arc by many American workers, Mother Jones lived to age 100, fighting for labor most of her life.