In the spring of 1825 two major fur trading companies explored Utah to identify the region’s beaver supply. American trappers affiliated with William H. Ashley and led by Johnson Gardner had traveled westward along the Strawberry River and ultimately into Weber Canyon. Meanwhile, Peter Skene Ogden of the rival Hudson’s Bay Company, a British outfit, led his Snake River Expedition southward along the Green River. For several months the two parties saw little of each other. Aside from a few impromptu encounters, each company left the other alone. But the solitude quickly ended when both groups met at Mountain Green on the Weber River in what would later be part of Utah’s Morgan County. 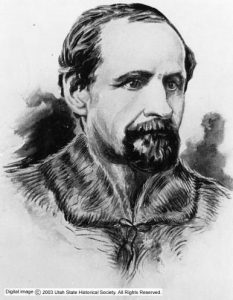 On May 22 Ogden set up camp at a spot on the Weber River now known as Mountain Green. Also in the vicinity was Etienne Provost, a Frenchman up from Taos, New Mexico, who was trapping with a license issued by the Mexican government. Provost, who would give his name to the future town of Provo, Utah County, was a neutral bystander in the events that soon followed. When Johnson Gardner’s American trappers camped less than 100 yards from the British group on May 23 and flew the U.S. flag, the stage was set for an international incident. Gardner and his men were prepared to fight for territorial rights; they claimed that the camp was located in United States territory. Ogden countered that it was in an area under the joint control of the British and American governments. (Actually, Provost had the better claim since he had a license from the Mexican government. The Adams-Onis Treaty of 1819 had recognized Mexican rights to land south of the 42nd Parallel.)  On the morning of May 24 Gardner took his claim to Ogden’s tent and ordered the Hudson’s Bay trappers to leave. Ogden naturally refused, and tension filled the rival camps.

But Ogden’s position was quickly eroding. Gardner informed his trappers that they had no further obligation to the Hudson’s Bay Company. He offered each employee high wages of $3.50 a beaver and cheap goods if they would join the Americans. The offer was hard to refuse. Ogden’s overcharged and underpaid men had little loyalty to the company. Several Iroquois and one French trapper, deserters who had joined the Americans a year earlier, visited the tents of Ogden’s trappers to encourage them to desert the British company. Convinced by their stories, some men began taking down their tents and preparing to leave. One of them, John Grey, an Iroquois trapper, told Ogden, “You have dealt fair with me and with all of us. But go we will….If every man in the camp does not leave you, they seek not their own interest.”

As they left camp, some of the deserters took with them company horses and supplies. Ogden accused the men of theft and tried to seize the horses. As the atmosphere grew more tense, Gardner announced that he was prepared to defend any deserter. Then, an Iroquois who had left the Hudson’s Bay Company in 1822 shouted, “We are superiors in numbers! Let’s fire and pillage them!” Some of Gardner’s men pointed guns at Ogden while the deserters left camp.

Meanwhile, Ogden’s Indian wife was having her own troubles with the deserters. While she was busy collecting her children, several men stampeded the company horses outside her tent. Her eight-month-old son Michael had been tied to the saddle of one of the mares that was herded off. The frightened mother quickly ran to the American camp and managed to seize the child and mare before being caught. On her way back she collected several company horses loaded with furs.

That night rumor spread throughout Ogden’s camp that the Americans were planning an attack. But all was quiet, and the next morning Ogden gave a call to abandon the camp. The Hudson’s Bay Company, greatly reduced in numbers and supplies, retreated to the Flathead Post. Though the two parties managed to avoid further confrontation, the incident at Mountain Green only strengthened the long-standing rivalry between the British and American companies.

The irony of the situation was that neither party had a territorial claim to the land. Under the Adams-Onis Treaty Mountain Green was part of Mexican territory in 1825. Ogden might have argued that the British were not involved in that treaty. Still, neither company had a license to trap in Mexican territory. Gardner and Ogden, both ready to fight for territorial claims to the land, were wrong from the beginning.