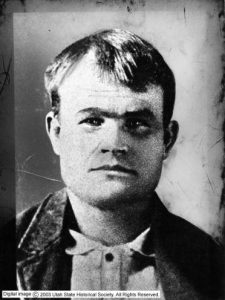 So many myths and legends surround the life and demise of Butch Cassidy that it is difficult to sort fact from fiction. Charles Kelly related the story of sixteen-year-old Harry Ogden from Escalante, who spent his savings to purchase a good horse and a sixty-dollar saddle. When out riding along the border of Robbers’ Roost in 1898, an outlaw on a jaded mount forced young Ogden off his horse, gave the boy a quick kick in the pants, then rode off on Ogden’s animal. About three weeks later, Ogden received visitors at his home in Escalante. One of the men was Butch Cassidy, another was the outlaw who had stolen Ogden’s horse and was still riding it. When Cassidy asked Ogden if he had lost a horse, the boy quickly identified it. Butch Cassidy then ordered the outlaw off the horse and told him “to start walking toward a distant gap in the hills and keep on going.” He then said, “We don’t have any room in this country for a man who will mistreat a young boy.”46

Most who knew him described Butch Cassidy as an agreeable fellow with a sense of humor, generous with his associates, and quick to make friends with children. He also liked the ladies, and many apparently returned his affections. There is no documentation that he ever killed anyone, although some members of his loosely formed gang, called “The Wild Bunch,” could not make that claim. One of the prevailing beliefs, and one perpetuated by the movie Butch Cassidy and the Sundance Kid, is that Cassidy and the Sundance Kid met their deaths in Bolivia when they were involved in a shoot-out with the local military in 1912. There is no question that the two went with Etta Place to Argentina and later were in Bolivia. However, many individuals claim that Cassidy returned to the United States—some say to California, others claim to the Pacific Northwest—and lived the rest of his life within the law under an assumed identity.

Among those making the claim were members of his own family; his sister Lula Parker Betenson claimed that Cassidy came for a visit in the fall of 1925. On that occasion he told members of his family that a friend, Percy Seibert, from the Concordia Tin Mines near San Vicente, Bolivia, identified the two bodies as being those of him and Sundance. Cassidy figured Seibert did this so he could make a new start for himself without being chased by the law, either in the United States or in South America. Apparently he had expressed just such a desire to Seibert on several occasions. In addition to his family’s claims, many former associates in Wyoming insisted that Butch Cassidy returned there for a visit in the 1930s.

Some residents of Garfield County also claim that they saw Butch Cassidy during the 1930s. In her autobiography, Emma Allene Savage Riddle recalled her experience: “One day I went with Dad to visit Elijah Moore. There were several other men at his home when we arrived. Elijah introduced us to them and one of them was an outlaw by the name of Leroy Parker, alias Butch Cassidy. This was after Butch had been reported killed in Bolivia, South America. I was in awe of the man, thinking I had met a real honest-to-goodness outlaw.”49

Wallace Ott told that Lige Moore invited him to come over to his home to meet Butch in 1937 or 1938. Ott said Kenneth Goulding, Sr., was also present. Reportedly Butch rehearsed for those gathered how he came to lead his life. He told Ott that while attending a dance in Panguitch he got into a fight with the boyfriend of one of the girls he danced with. At first everyone thought Butch had killed the guy, rather than just knocking him out. He quickly fled town, followed by a posse. In Red Canyon he eluded his pursuers by detouring up a gulch in the dark; the posse rode on past him. Cassidy eventually made his way back to Circleville, where he packed up and headed for Colorado. A draw in Red Canyon today bears Cassidy’s name. The sequence of his exploits as he reportedly related them to those gathered in the Moore home does not agree with what has been written by others, and so the stories and speculation continue.