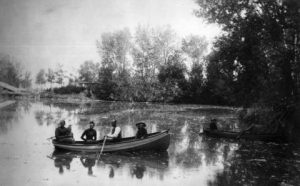 On a frosty morning in 1902 a U. S. Army troop train stopped in Salt Lake City where the 1st Battalion and regimental headquarters of the 12th Infantry detrained. After three years in the Philippines they had been reassigned to regular Army posts in the States. Some units drew Fort Duchesne in the Uinta Basin, Fort Bliss in Texas, or Fort Apache, Arizona. Assignment to Fort Douglas, Utah, was considered a plum.

Oscar W. Hoop, who served in the Army from 1900 to 1943 and rose from private to colonel, wrote a colorful account of his experiences at Fort Douglas where he was a typist in regimental headquarters.

After trudging three miles from the train station to the post the men were assigned to barracks on the north side of the parade ground. The barracks had been “swept, doused with soapy water, and the doors unlocked,” Hoop wrote, but the men “soon found we were not the only occupants. After an enforced famine, the bed bugs greeted us with gigantic appetites.”

When the 12th Infantry contingents arrived the post was already housing two batteries of field artillery in barracks on the south side of the parade ground. The enlisted men were mostly young Kentuckians who were “immediately christened ‘Kaywaykies’ by the older and more sophisticated infantrymen. . . . The rivalry between artillery and infantry began at once and of course, became more intense as time went on”—especially after the artillery baseball team defeated the infantry nine. Occasionally the rivals resorted to fisticuffs.

When the infantry decided to form a football team, men with “reasonable experience” proved hard to find, and team manager, coach, and right halfback Lt. Moor N. Falls looked everywhere for “suitable material”—including the artillery and the guardhouse. After “Falls pulled a few political strings and military legerdemain,” he secured the release without trial of a six-foot two-inch, two-hundred pound deserter. According to Hoop, the man “did his part at right tackle quite acceptably for two months in the fall of 1902, and then deserted again. But the season was over and who cared?”

If players were hard to come by, so were opponents. The soldiers played only four games. Hoop said he had “conveniently forgotten” the score of the Fort Douglas—YMCA game, but he could not forget the score of his team’s game against the University of Utah: the U. 30 and Fort Douglas 0. Of this unforgettable match up he wrote: “The game was played in a whirling snowstorm and our defeat was attributed to our inability to see clearly the big blonde Larsens, Hansens, Nelsens, Carlsens, and Christiansens of the university team because of protective coloration.” The other two games were played against the Aggies in Logan. One ended in a scoreless tie and the other the soldiers won 10 to 5. Hoop, who quarterbacked the team, attributed the victory to fullback James Cook who had “the most accurate and devastating toe” he had ever seen. He kicked two field goals which “in those days counted the same as a touchdown”—apparently 5 points. Years later Hoop encountered W. M. Jardine, the Aggies’ quarterback who went on to a distinguished career as a diplomat and educator. The two men reminisced about the game, agreeing about almost all aspects of it—including the 10-5 score—except that Jardine claimed victory for his Aggies. Hoop was amazed that “a person of eminence and integrity” could distort the facts “to suit his needs and fancies.”

Salt Lake City in 1902 did not offer much “legitimate entertainment,” Hoop wrote. He described Calder’s Park as a resort with “a dance hall, benches, a little pond or two, several stands that sold beer by the bottle and sandwiches by the chunk, with a cop to keep order.” The prices at Saltair were too high for enlisted men. As for the notorious saloons, gambling halls, and houses of prostitution on aptly named Commercial Street, they did not harbor all the sin in the world, Hoop noted, but they tried their best. 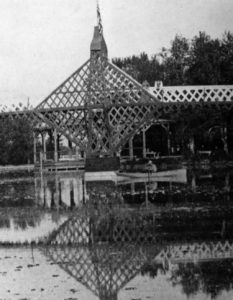 A section of the arched bridge in Calder’s Park. George and Mary B. Calder on the bridge. Gift of Mrs. Dora Calder Cooke. Current address Nibley Park, 2750 S. 1700 E.

Still, Hoop and his fellow soldiers did find some “legitimate” activities. He recalled the “excellent” fishing in Strawberry Creek when commanding officer Col. John W. Bubb took a dozen of his men on a week-long fishing and loafing trip to Strawberry Valley. Hoop was “positive that the governor of Utah did not have any better fare” than the trout, fried potatoes, and tin cup of black coffee that the soldiers enjoyed on their first night in camp.

The men at Fort Douglas associated with the city’s civilians on numerous occasions. Many Salt Lakers came to the Sunday afternoon concerts performed by the regimental band. Dances organized by officers and enlisted men on alternate Fridays also drew townspeople. These encounters resulted in a number of marriages between soldiers and Salt Lake girls, Hoop noted.

Hoop spent two years at Fort Douglas. His account provides a rare personal glimpse of Army life at the turn of the century. He did not devote much space to describing the post because, he said, “All army posts of that day had the two lines of barracks, the half circle of officers quarters at one end, headquarters, hospital, guardhouse, quartermaster shops, etc. strewn nearby.”

After his long career in the Army, including service in both World Wars, Hoop taught history at the University of Tulsa and served as fire and police commissioner in that city.