Utah’s prehistory is as diverse as its scenic topography, covering a period of more than 11,000 years. Archaeological sites have been identified in all corners of the state illustrating the ancient people of Utah were able to adapt to deserts, high mountains, badlands, and marshes.

The first people living in Utah are called the Paleoindians (11,000–8000 years ago) by archaeologists. The Paleoindians were hunters and gatherers who sometimes hunted now-extinct mammals like the mammoth. Paleoindian sites have been found across Utah but due to their age, they are very rare. Some Paleoindian camps along the shoreline of ancient Lake Gilbert have been identified by archaeologists reflecting Paleoindians’ use of marsh environments. At about 8000 years ago, changes in weaponry styles and subsistence patterns mark the beginning of the Archaic period. During the Archaic, people were hunters and gatherers, and nomadic but they also lived in semi-permanent small villages and caves. During the Archaic (8000–2500 years ago), people made a variety of basketry for plant collecting and various stone spear and dart tips used in hunting. The atlatl, or spear thrower, was used from roughly 8000 to 2000 years ago in Utah. Danger Cave and Juke Box Cave near Wendover, Utah are two famous sites used during the Paleoindian and Archaic time periods. 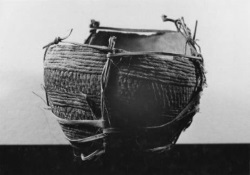 Subsistence patterns began to slowly change around 2500 years ago. Corn and later beans and squash were introduced into Utah possibly from the south. Farming changed how people made a living. Across much of northern Utah, the Fremont (2500–600 years ago) adopted a farming lifestyle but they still heavily relied on hunting and gathering for much of their food. Further to the south, in the Four Corners region and across the southern portion of Utah, the Anasazi (2500–600 years ago) heavily relied on corn, beans and squash. The Anasazi had domesticated the turkey and it was also used as an important source of food and raw material. The Anasazi sometimes built multi-storied homes along cliff faces and around the heads of deep canyons. Cliff dwellings dating to over 700 years ago can be seen in southern Utah and in the Four-corners area.

Around AD 1300, the people we call Fremont and Anasazi are no longer visible in the archaeological record. Some areas were abandoned and new cultures moved into the region. The archaeological record changes and is most similar to what is seen for Archaic age sites. In many respects, people went back to a hunter and gatherer lifestyle.