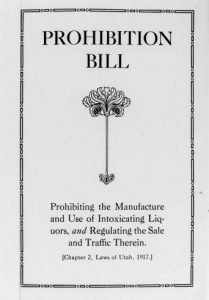 Nationally in 1893 a group of moral reformers organized the Anti-Saloon League. It joined forces with the Women’s Christian Temperance Union to intensify the long-standing campaign against drunkenness and its harmful effects on society. These organizations advocated government intervention to regulate drinking. In response to such lobbying many state, county, town, and city officials began restricting the sale and consumption of liquor. In fact, by the turn of the century nearly one-fourth of America’s population lived in “dry” communities that prohibited the sale of liquor.

Even before Utah finally enacted statewide prohibition in 1917 many small towns had already adopted their own anti-liquor laws. On October 21, 1911, St. George passed an ordinance prohibiting the manufacture and sale of intoxicating liquors. Yet, as St. George and other communities found, regulating people’s drinking habits was no easy task. Less than two months after the bill’s enactment several young men secured a five-gallon keg of wine and sneaked west of the city to indulge. After enjoying much of the illegal liquid one young man, for no apparent reason, shot and wounded one of his drinking buddies. News of the incident traveled fast, and soon the whole group was arrested and tried for drunkenness. One pled guilty and was fined $7.  Four others were acquitted due to lack of evidence, and two more were found guilty and fined $10 each.

Not only was regulating drinking difficult, but, as Grand County officers discovered, stopping its illegal sale was also challenging. In 1911 Sheriff Bliss of Moab, acting on information that John Tescher was selling liquor from his home, searched the residence and seized about three quarts of whiskey and numerous empty kegs. Tescher pled guilty to owning and keeping whiskey for sale and was fined $250. In another Grand County case Warren J. Gardner was found guilty of selling a gallon of wine to five minors. His attorney tried to establish that the wine was actually unfermented pure grape juice, but two of the boys testified to the contrary. They told the court that they became intoxicated after drinking it. The jury believed the boys, and the judge sentenced Gardner to ninety days in the county jail.

These experiences were only precursors of what lay ahead. After the ratification of the Eighteenth Amendment to the U.S. Constitution in 1919, which instituted nationwide prohibition, the illegal production and sale of liquor increased dramatically in Utah and across America. Large-scale regulation proved even more challenging than enforcing state and local ordinances.

In 1923 Utah’s Attorney General claimed that drinking in the larger cities was just as bad as before prohibition. Huge profits from the manufacture and sale of liquor made it impossible to stop. In Milford, Beaver County, officials alleged that the chief bootlegger was the city marshal’s sister. In Sanpete County one bootlegger loaded whiskey in the pack saddle of his trained horse and sent it home over twenty miles of mountainous road. He returned in his car, and when officers stopped him on suspicion of bootlegging they found no liquor in his vehicle. One Salt Lake City mother kept a still going in the basement of her house while her husband was serving an eighteen-month sentence for bootlegging. More shocking, raids on speakeasies in Utah often netted off-duty policemen among the criminal drinkers. Overall, from 1925 to 1932 federal agents in Utah seized over 400 distilleries, 25,000 gallons of spirits, 8,000 gallons of malt liquors, 13,000 gallons of wine, and 332,000 gallons of mash.

Local authorities did their part to ensure that their respective towns remained dry. In Utah’s Dixie, when one local drugstore began selling “tonic beverages,” a question arose over the definition of “intoxicating liquors.” While the town clerk wrote to the state attorney general for clarification, town leaders instructed the marshal to request that the drugstore “promise to stop selling alcoholic tonic.” If the store manager refused, the marshal was to threaten nonrenewal of his business license. The scare tactics proved unnecessary when the store owner agreed to remove the offensive liquid from the shelves.

Problems of enforcement and the unpopularity of prohibition led to agitation for its repeal. Following his 1932 election, President Franklin D. Roosevelt kept his campaign pledge and each state soon began voting on the issue in special conventions. Despite the Mormon church’s efforts, Utahns voted on November 7, 1933, for repeal of national prohibition and in the same election also repealed the state’s liquor law. Utah was the thirty-sixth state to vote for repeal and thus, ironically, delivered prohibition its death blow.

Legal liquor began flowing again in Utah in 1935 when the first state liquor stores in Salt Lake City and Ogden opened their doors. Business was brisk at the new stores as Utahns eagerly purchased the once forbidden liquors; in the first fifteen days of operation receipts totaled $54,866.